Have you ever made a cupcake bouquet?  If not, today is your day, and it’s easier than you think.   It’s a great Mother’s Day Gift idea, but it can be made just for fun or for birthdays or graduation parties or baby showers or anything!  It is both a centerpiece AND a dessert, a win win!  What makes it so so easy is the grocery store bakery-bought cupcakes – with them, you can put together your bouquet in no time. 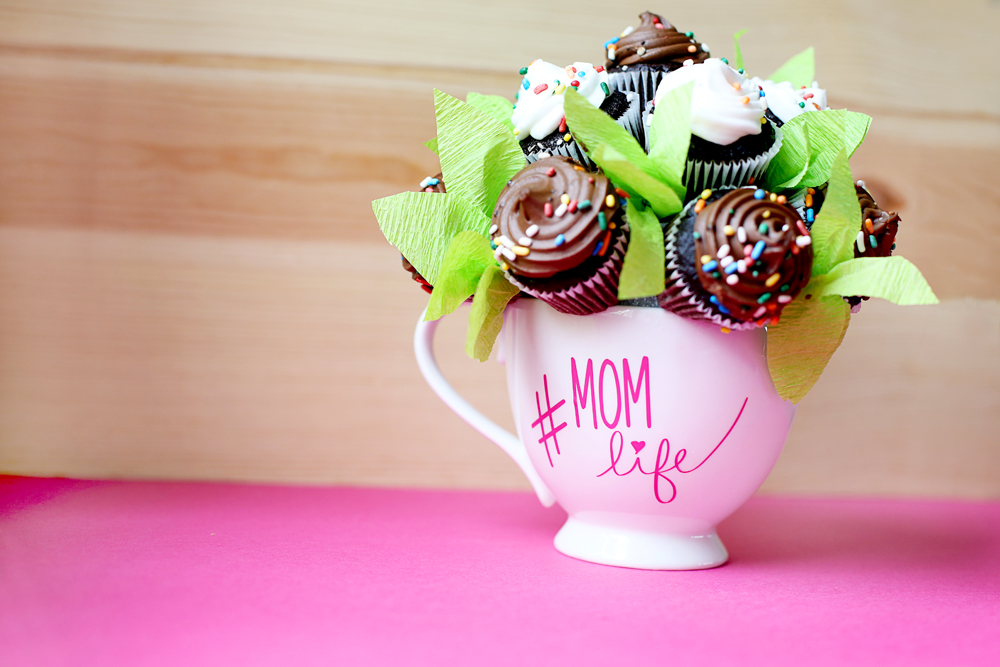 Didn’t it turn out so so cute??  You can pin the image below to save the idea for later: 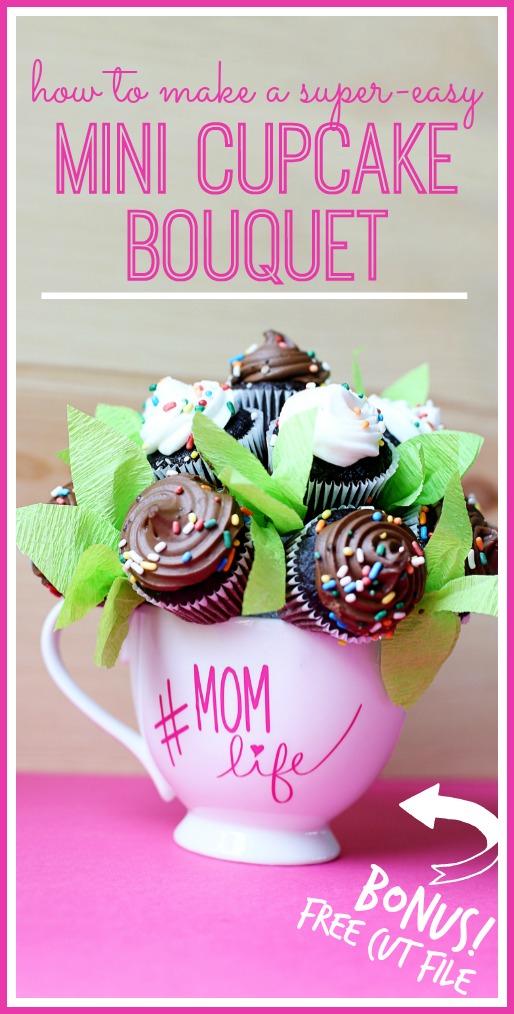 Let’s go ahead and get started on the tutorial! 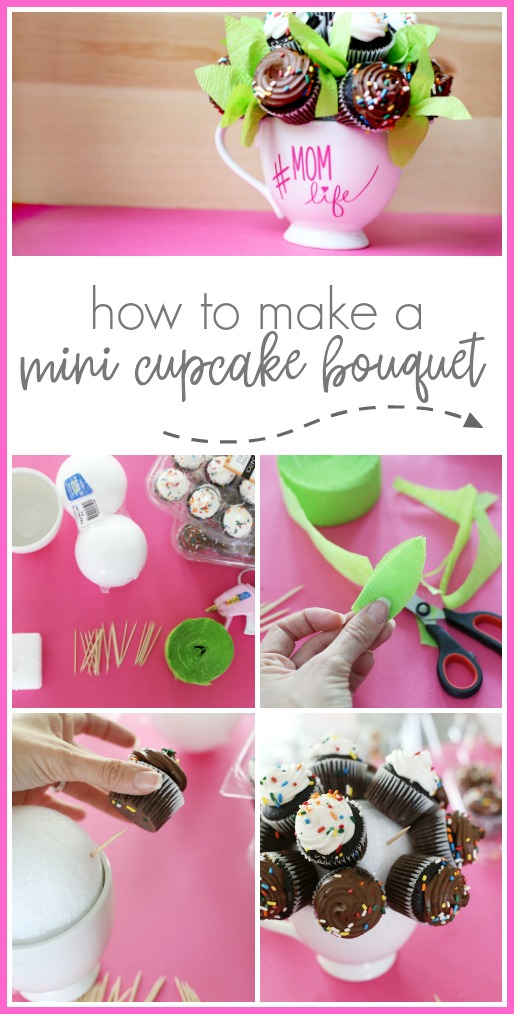 Go here for how to use vinyl.

—Foam Ball to fit the mug (mine was 4 inches, but my mug was pretty large) 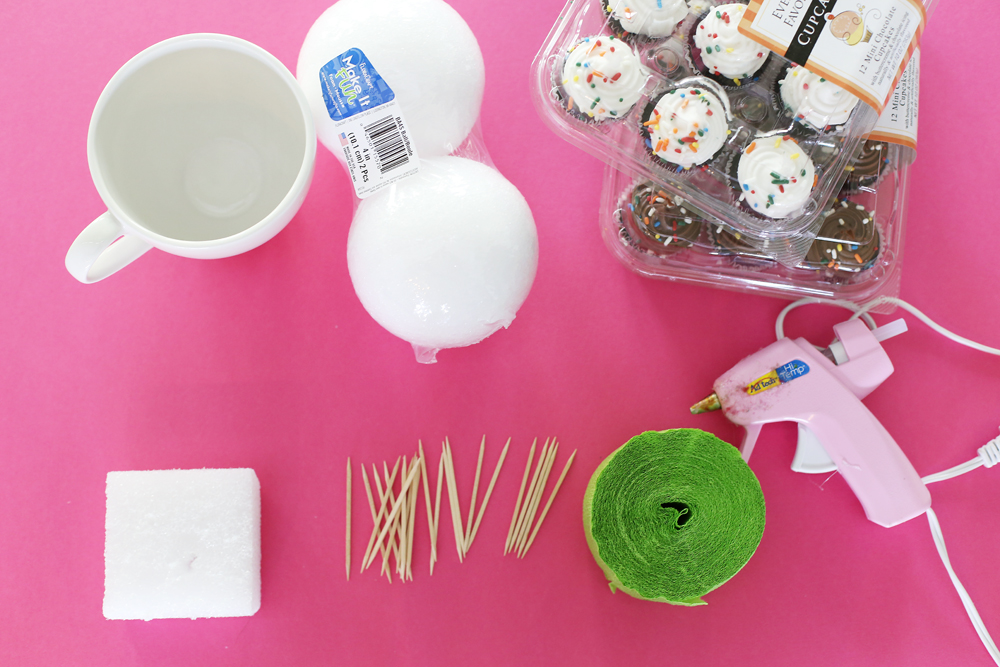 In case you like to watch the process in action, I put together a how-to video for this project, yea!!

Base Preparation for Mug

First fit your foam ball into the cup.  It may need to be cut down or adjusted.  Mine sank too low into my cup so I used a scrap of foam under it to make it a little higher. 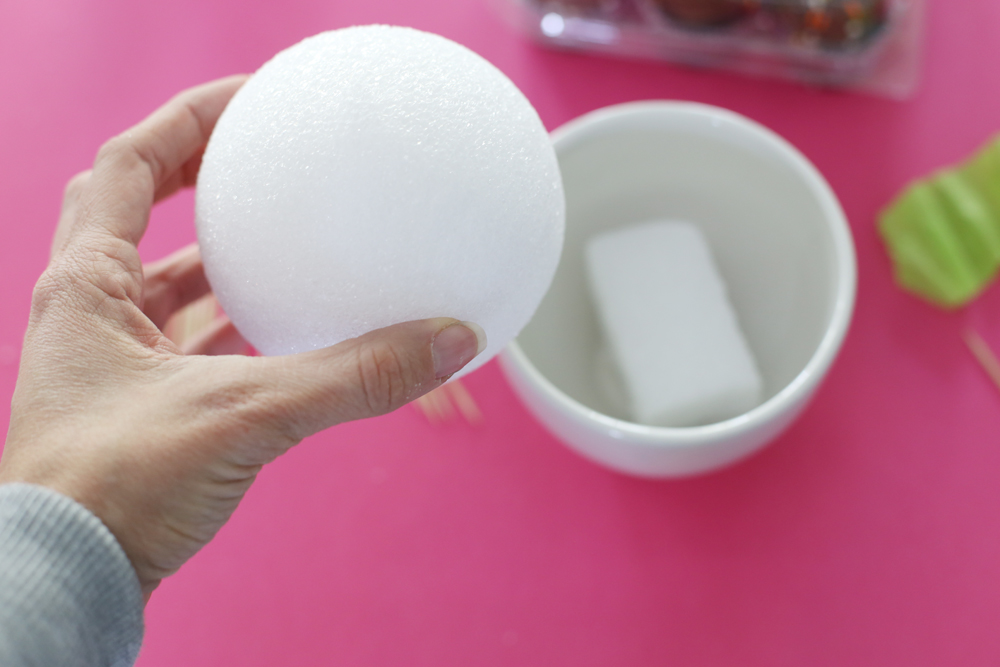 Now, it’s time to attach the cupcakes.  I tried a couple of different methods so I could pass along the best info.  At first I put the toothpick in the cupcake and then tried to place it on the foam, as shown below: 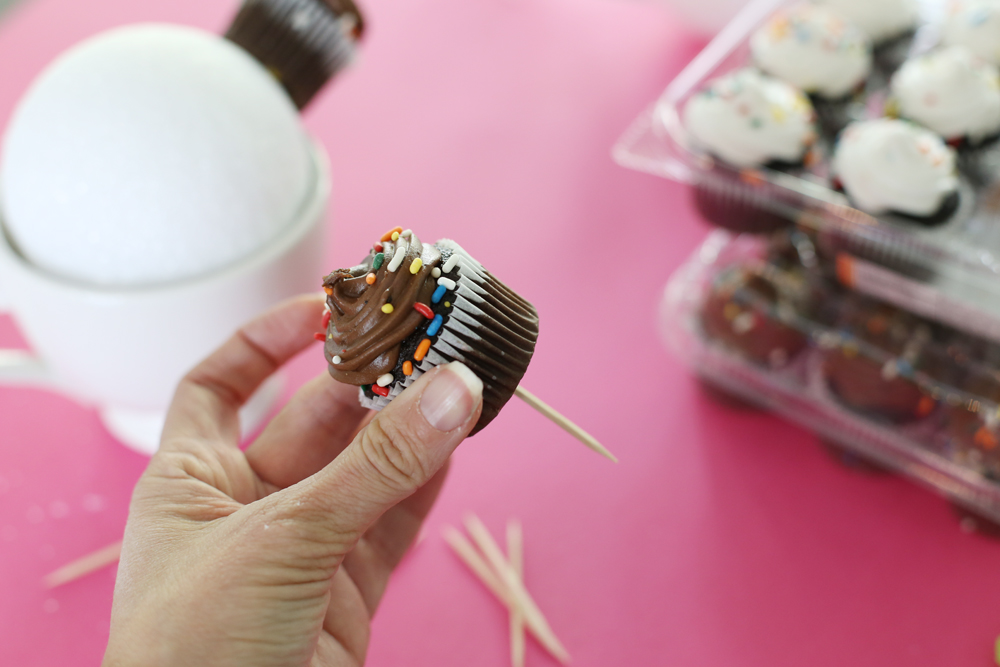 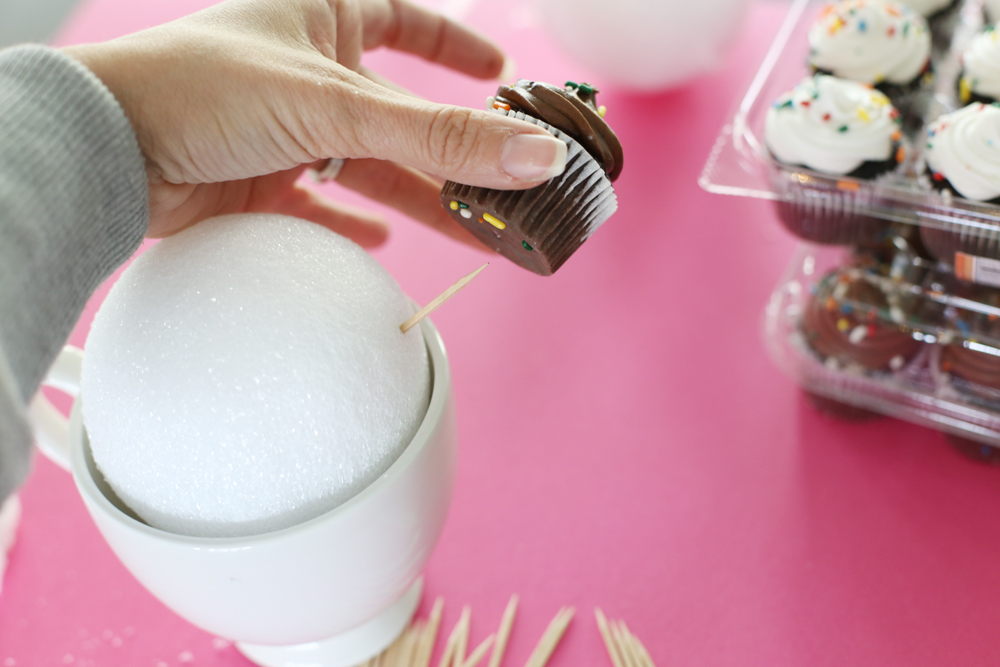 Since these are mini-sized cupcakes, they won’t slide down the foam – a single toothpick is enough to hold them into place.  That’s what makes this so easy! 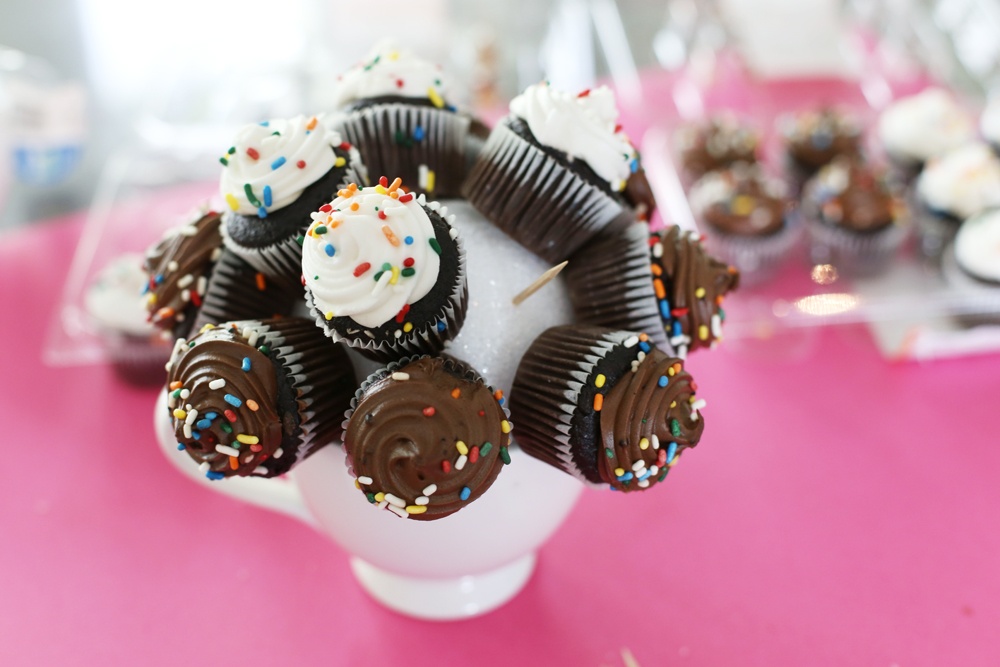 Once you have all of your cupcakes placed, you’ll notice that there are still gaps, as if your bouquet is missing something.  Most floral bouquets have greenery as filler, so we’re going to make that as well!  Fold your crepe paper until you have four layers, then cut out a leaf shape.  Hot glue the leaves onto a toothpick and place into a space in your bouquet. Repeat until desired. 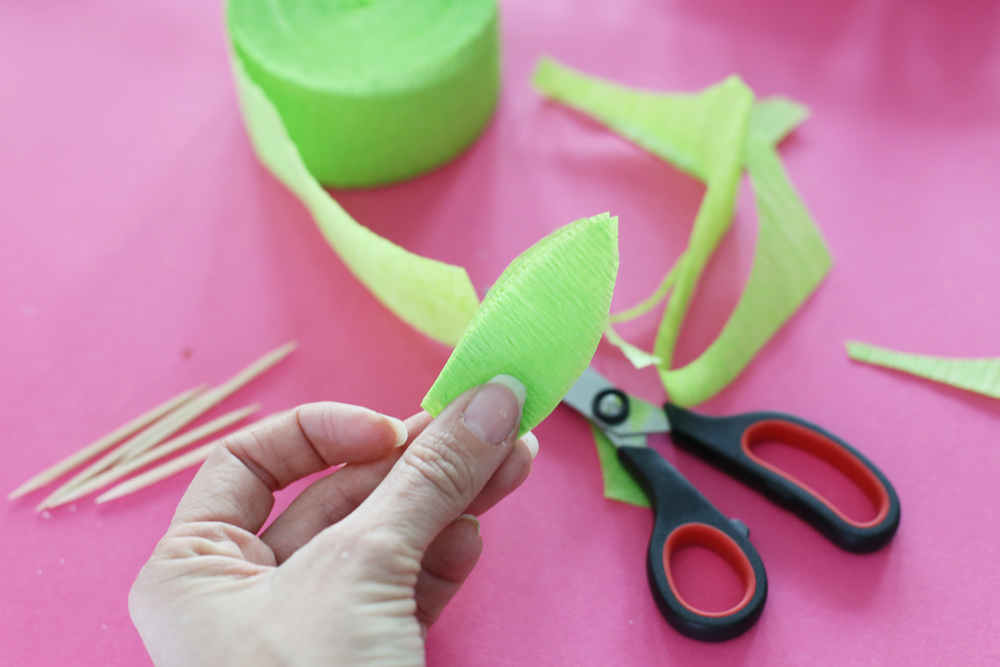 And that’s it!! I added some vinyl to my mug to personalize it a little – such a fun gift idea! 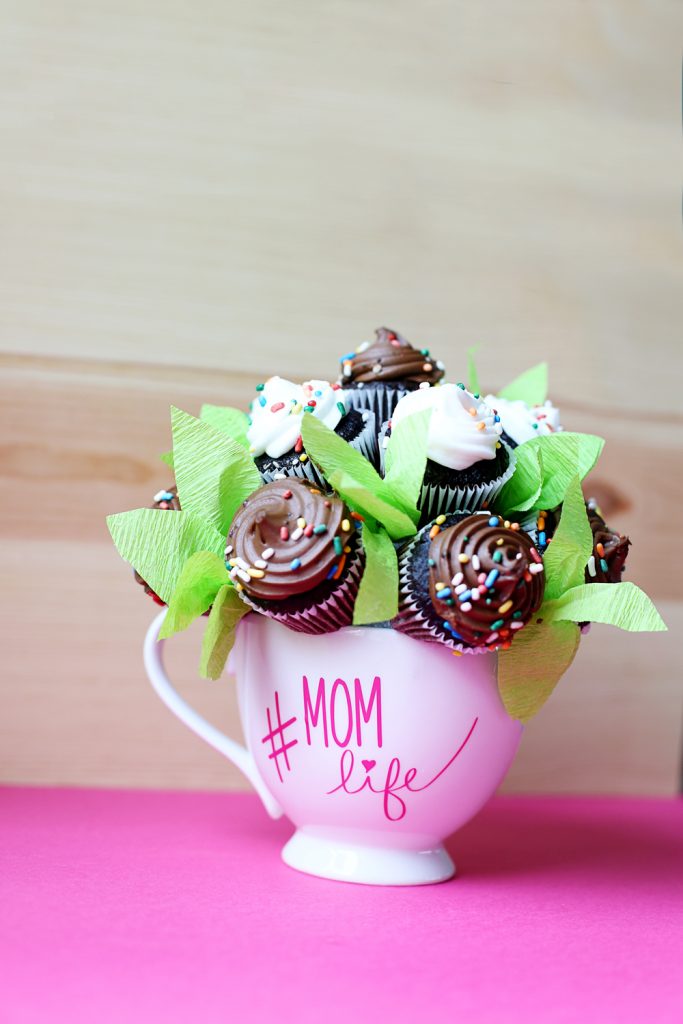 So go pick up your goodies and get to creating – it’ll probably only take about 10 minutes and you’ll have this yummy gift to give! 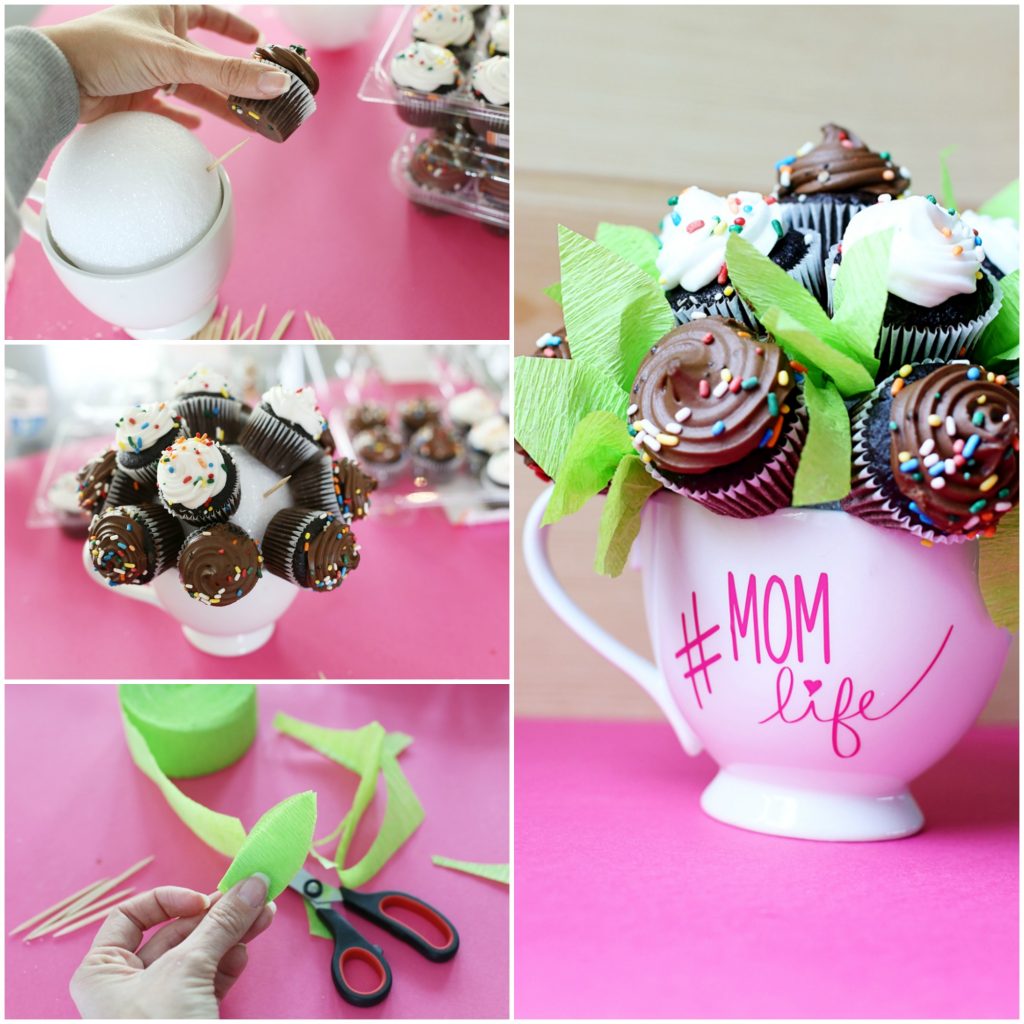 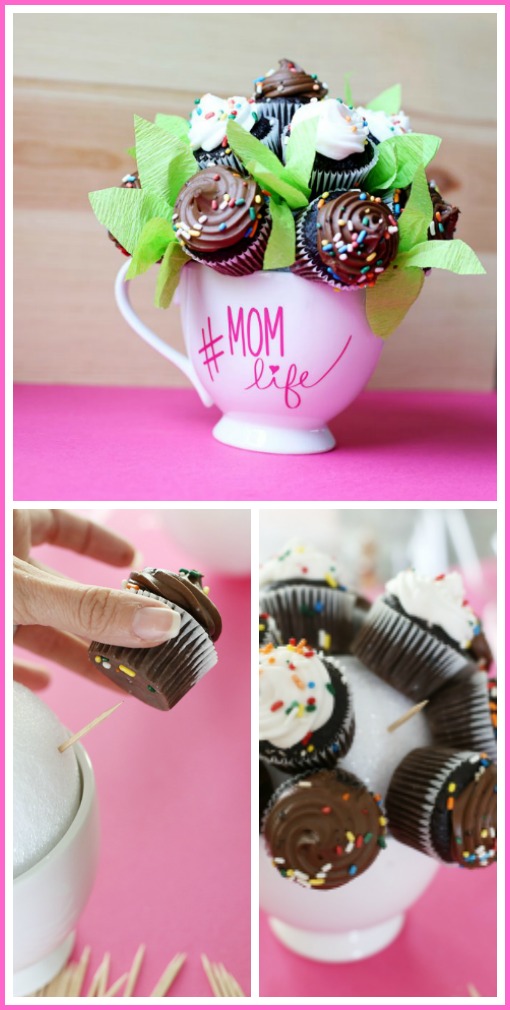 Looking for other Mother’s Day Craft Ideas? Be sure to check out:
How to Make a Photo Pendant
Last-Minute Mother’s Day Gift Ideas
Cute Custom Fabric Pots