Hi, my name is Shannah {from Just Us Four} and I love spaghetti squash! I will go ahead and debunk the myth that it actually tastes anything like spaghetti because really…it doesn’t. It would be great if it is did but well, it is still pretty delicious even though it doesn’t taste like its namesake pasta. Where was I?
Oh, I love spaghetti squash. It is so versatile and super easy to make. Recently, I transformed a super heavy Italian favorite into Chicken Parmesan Spaghetti Squash and it was a total success. So, as all bloggers do, I came here to share my success with you. 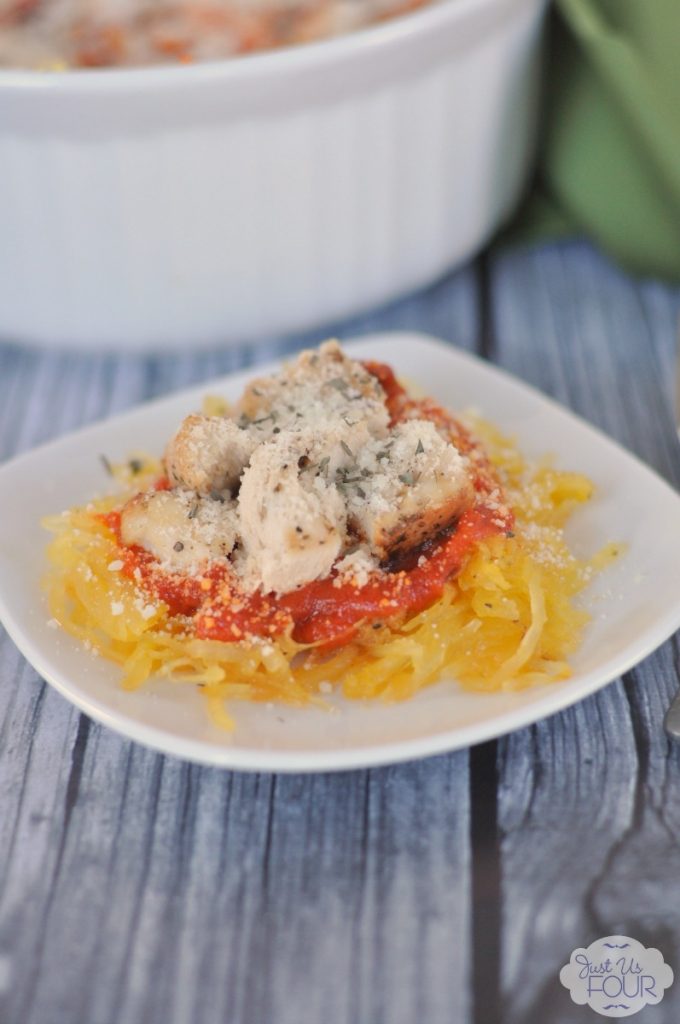 This Chicken Parmesan is so easy to make! While the spaghetti squash may not taste like spaghetti, it is a perfect compliment to this dish.

1) Preheat oven to 400 degrees. Slice spaghetti squash in half and scoop out the seeds. Brush the cut sides with 2 Tbsp of olive oil and season with salt and pepper. Place, cut side down, on a large rimmed baking sheet. Bake for 30-40 minutes or until easily pierced with a fork. Remove from the oven and, using a fork, gently pull the squash from the skin to create “noodles.” Place in oven safe dish.

2) Meanwhile, combine breadcrumbs, Parmesan cheese and basil in a bowl. Stir to combine.

3) Heat 1 Tbsp of oil in a large pan over medium heat. Season chicken with salt and pepper. Add to pan and cook for about 5 minutes on each side or until done. Remove from heat and let stand for 5 minutes. Cut into pieces.

4) Add chicken to spaghetti squash. Top with marinara sauce. Sprinkle with breadcrumb mixture. Return to oven for 5-10 minutes or until heated through.

We’ve made this several times now and my family raves about it. Anytime I can get something like squash into my kids, I call it a win 🙂 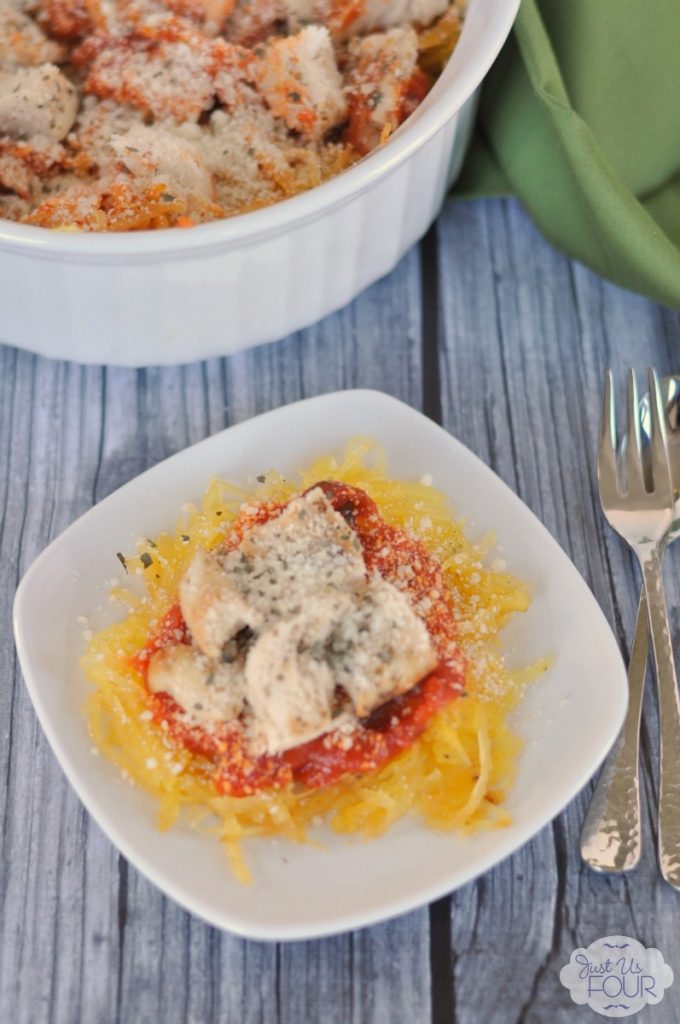 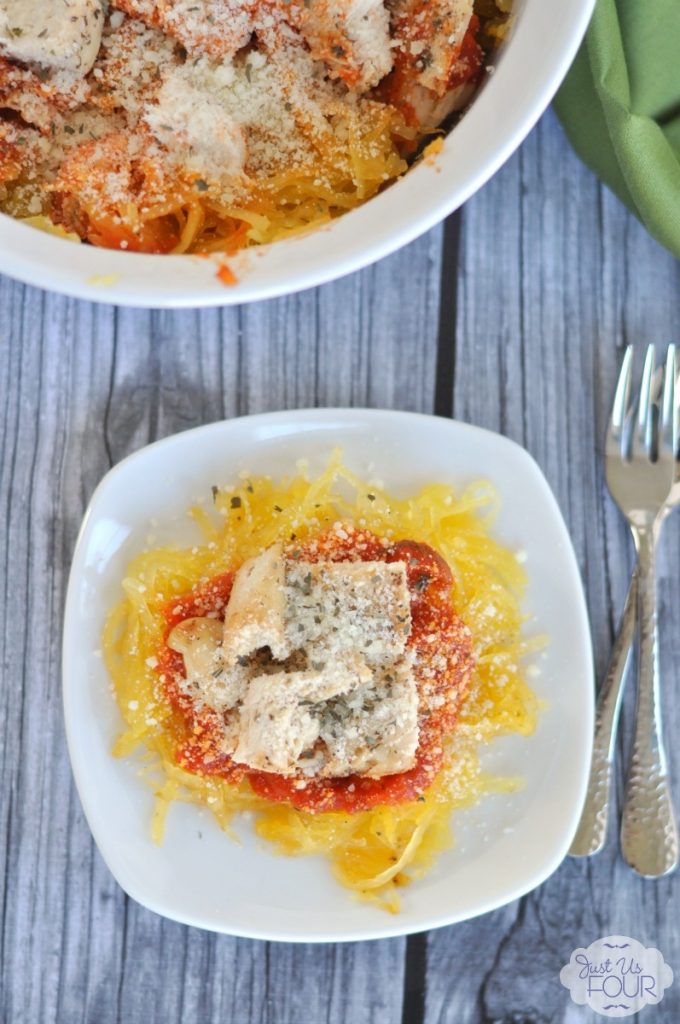 I would love for you to come pay me a visit over at Just Us Four where I am sharing the perfect recipe for you to use those Thanksgiving leftovers in {you can click on the pictures to see them}! 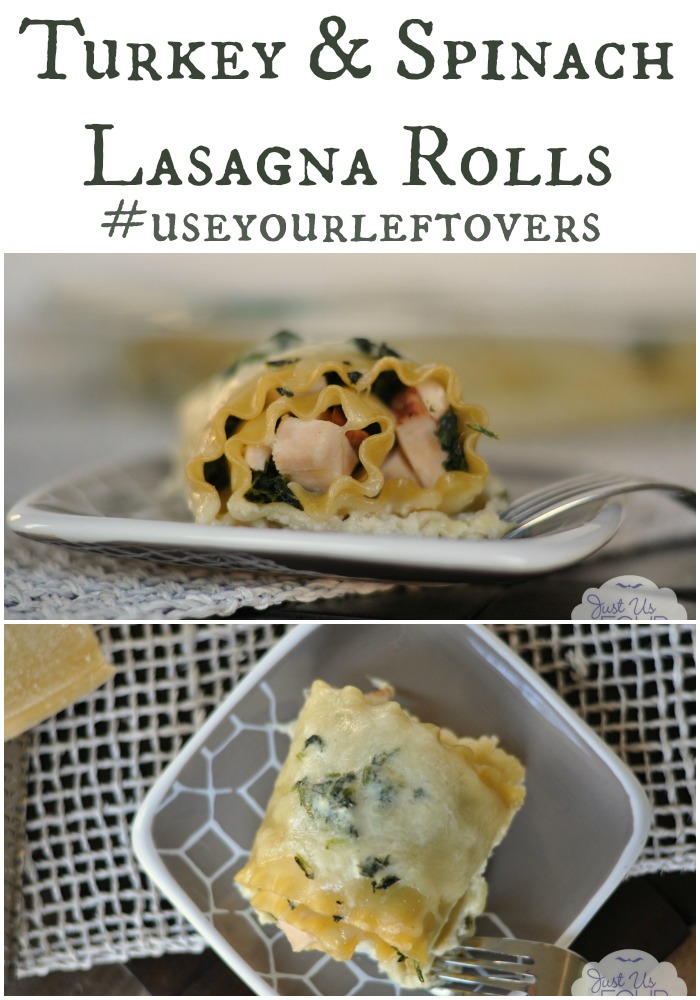