When people know you’re “crafty” you get asked to do a lot of crazy things.  Like make a Scout Troop Flag.    This thing gave me trouble from beginning to end, and the whole time I made it I thought “never again”.  But then it came out alright and maybe it wasn’t so bad… and I guess it was a hit with the boys: 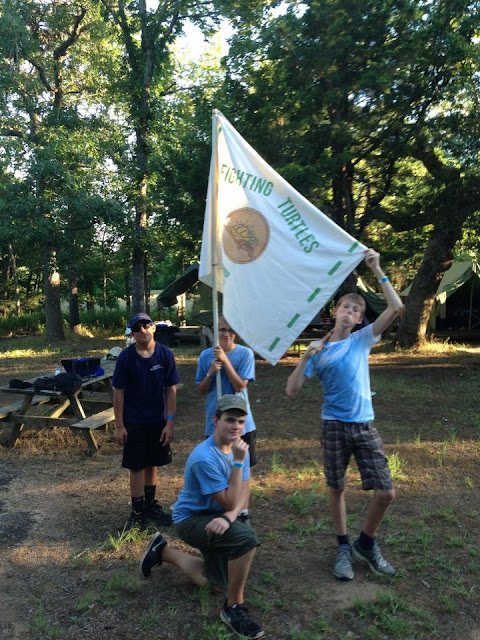 My uncle wanted a flag for his troop, and apparently their mascot is the Fighting Turtles?!  He sent me this image that he wanted on the flag: 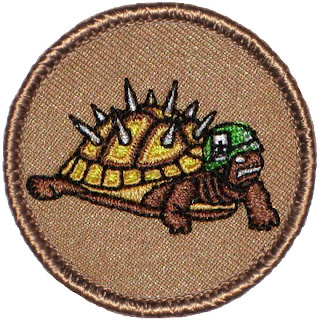 So I went with the good ole fabric transfer things – I’d never actually used them.  It’s special paper (in the craft department by where all the tshirt embellishment stuff is) that you run through your printer.  Mirror your image if that matters.  Then you iron it onto your flag and be done.  Or so I thought.
The first challenge was that the flag was huge – so the turtle needed to be as well.  I used photoshop to make it giant and then split it into 4 parts, so the turtle image covered 4 pages.  And I printed out the 4 pages and then put it together onto the flag like a puzzle.  Figuring out how to cut the image into multiple pages took me way way longer than it should have. 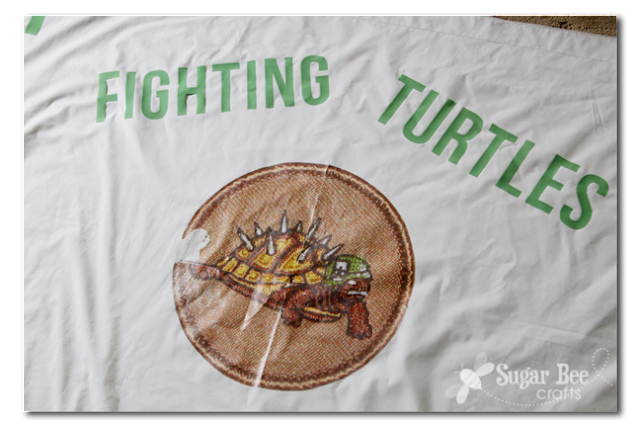 Lining them up on the flag was a little tricky.  Then one of the sections didn’t secure that well.  I had already peeled off the backer sheet so I thought I could over it with a cloth and use an iron to heat it and stick it down, because that’s what I do with vinyl.  But no!  The transfer stuff stuck to the cloth and pulled off an ever bigger chunk – oops.  I just told myself it was the “distressed” look and went for it.
Then I was going to put in gromments (like my kitchen curtains) but I didn’t have any like I thought.  So I bought some smaller grommets at Walmart (because Joann’s is a little bit of a drive) and of course grabbed the refill pack so it didn’t come with the setting tool.  Doh!  I ended up just sewing giant buttonholes where I was going to put the grommets.
I cut the words with my Silhouette out of flocked vinyl, but should have had more on hand because I wanted them to be bigger.  Oh well.
The base of the flag is just a sheet, which I would recommend.  You know I love sewing with sheets  – so much yardage for such little cost.  Win win.
Pin it to Pinterest