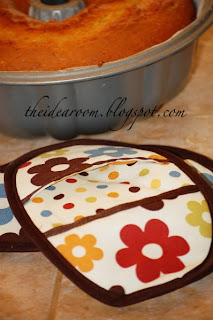 I love the Oven Mit that Amy made over on The Idea Room a while ago – it’s been on my to-do list – here is hers, to the left.  When I whipped up my mom an apron and had a little leftover chicken fabric I thought, I should make a making oven mit.  I even bought the therma-fil (it’s like batting with a piece of foil in it – you use in things to insulate from the heat) and bias tape (but the wrong kind – more on that below).  But the project was still on the back burner – until today, when I wanted something quick and easy and Mother’s Day is a few days away – a potholder isn’t anything compared to the giant ceramic chicken my brother bought my mom, but oh well.
So I downloaded the free pattern from The Idea Room and cut out all my pieces: 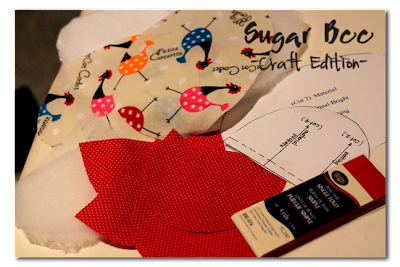 Then basted (that’s just sewing with big stitches) the batting to the right fabric: 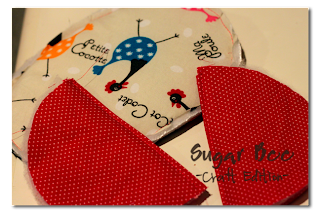 Then sewed it together and cut close up to the seam to prepare for the bias tape: 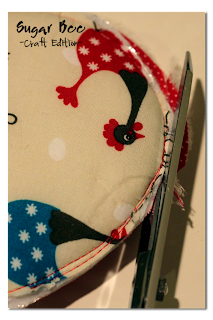 But of course I then realized I bought single-fold bias tape; but to wrap around something, like an edge, you need double-fold.  When I’m rolling on a project I just want to keep going – so I sewed two pieces of single-fold together to make some makeshift double fold.  I’m not good at attaching bias tape – and this had a curve, even trickier – you can see where I messed up – oh well. (this happened in several spots – some are just off-camera) 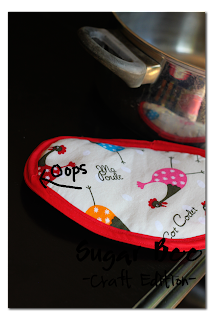 So, in the end it was a quick project but I want to make another one – I know I can do a better job.  I think I would switch which fabrics I use – put the red dot under the chicken where the handles go.   And get the right kind of bias tape, and go slower around the edges so I don’t get wrinkles. Or maybe I’ll make a square shape or something. 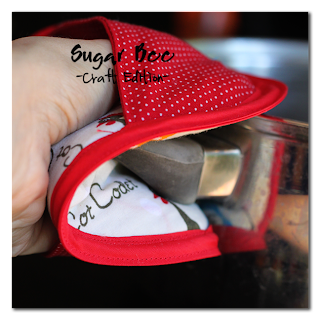