Yes, you read that right, this post is about the I Spy Quilt – wahoo! 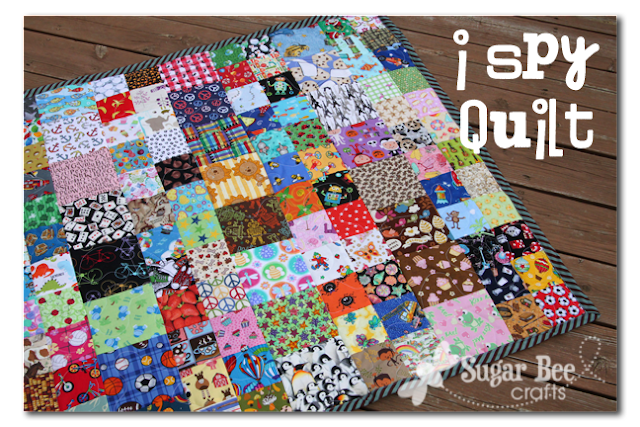 I signed up for a couple of swaps.  I probably wouldn’t have done anything with the squares – you know, waited a few years while they sat starring at me, but when Kimbo sent the squares back she sent a letter saying everyone could showcase their quilts by Nov 1st.  The nerve of her, expecting me to actually follow through to the end with a craft project…..

But look – I actually finished it!  I thought it would be perfect for taking to all those outdoor things – mainly, my son’s flag football games, so the other kids could have a place to sit and be entertained all at once.  We’re well into the season, so I almost didn’t make it, but I can still tote it along to the final 2 games. 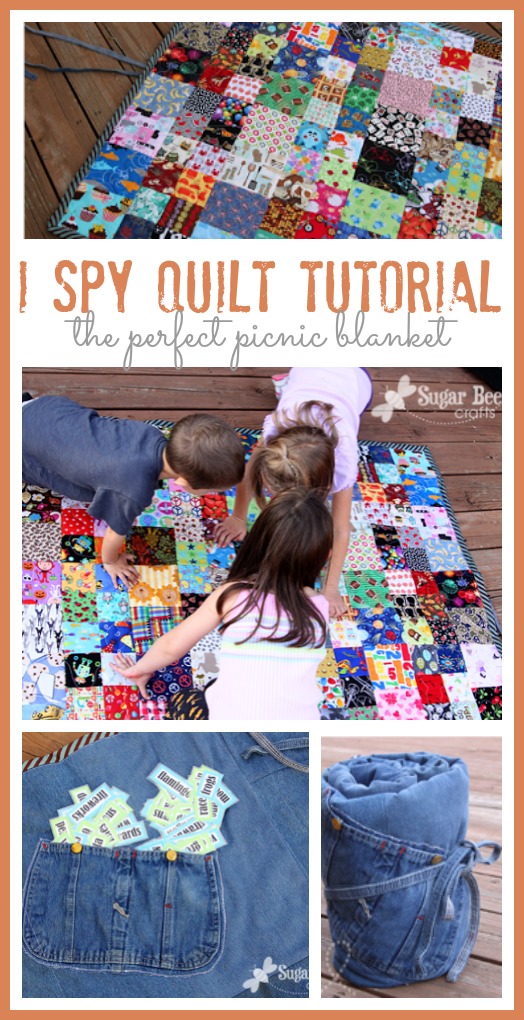 So a quick rundown – – if you are a real quilter, you might want to avert your eyes……

First off, I participated in 2 different swaps.  I cut a bunch of the same fabric into squares, then mailed them off and the swap host puts everyones fabric into a big pile then divys it out, so I got back a bunch of different fabric squares.  Perfect – except for that the 2 swaps I signed up for were different sized squares – whoops.

So what I did was laid out the squares into larger square pods.  Each larger square had 2 big squares and 6 small squares inside of it.  I sewed those 8 squares together into their pod.  Some I Spy quilts have plain fabric between each square, but I liked the look of them all touching, jumbled together (make it tougher on those kiddos!) I placed everything out, but of course lost track while I was moving piles from one place to another, so the quilt looks nothing like this pre-layout: 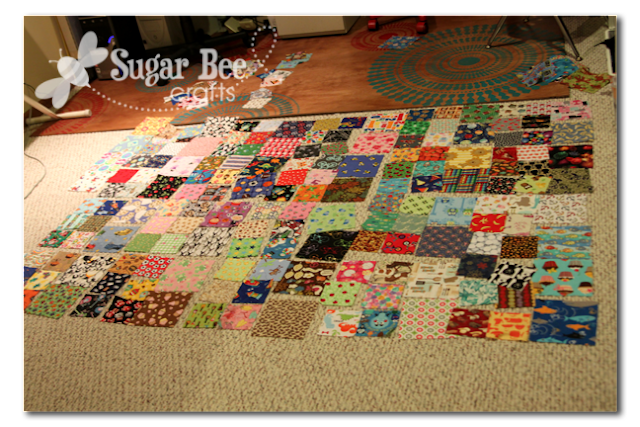 Since I wanted an outdoor blanket, I knew I was backing it with denium.  For durability, and because I have a huge pile of discarded overalls from my uncle (he knew I couldn’t say no to trash clothing).  Since I wanted to back it with denium, I didn’t think I could quilt it very well – sounded too thick to swirl around, etc.  So I just took my pod things, put a piece of batting under them, and quilted them individually.  There’s a name for this type of quilting, without the back on – I don’t know what it is. 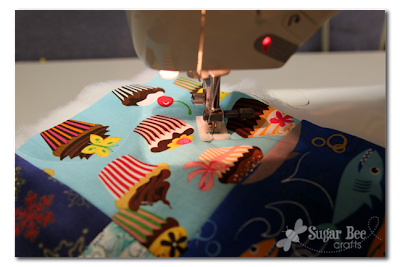 My pile of progress: 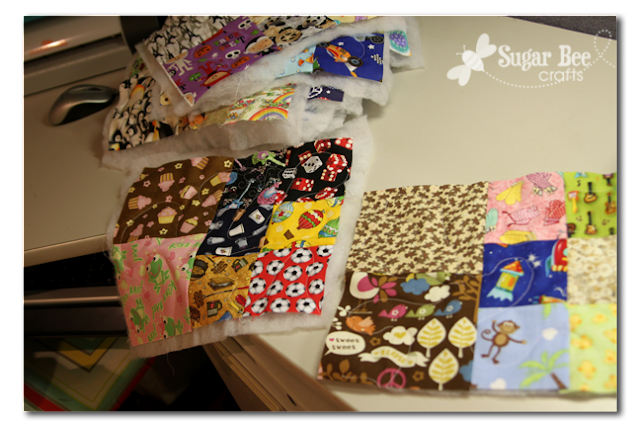 Then I took those quilted squares (well, they’re kind of rectangle-ish) and sewed them together – – see the back, you can tell what I’m talking about: 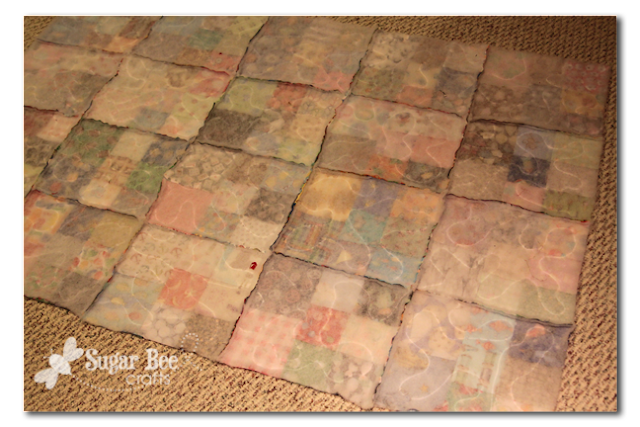 Then I sewed a bunch of jeans together haphazardly for the back.  To hold the front to the back, I sewed down a few rows, just straight.  Here’s sewing the rows: 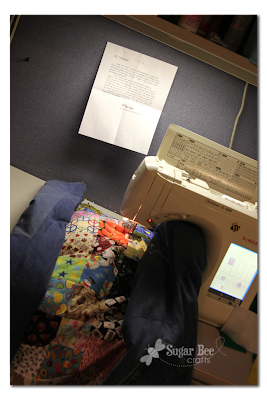 Did you notice that I tacked up Kimbo’s letter right by my sewing machine – it’s been there a couple of months – it’s like she’s heckling  me every time I sew something other than my I Spy quilt 🙂
A view of the wonky back – I just claim that “wonky” was the look I was going for: 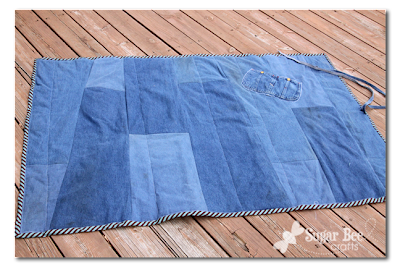 The original plan was to embroider a whole list of all the things to find on the quilt – sounded very long and involved and I just wasn’t looking forward to it.  Then Kim said she was going to make cards for hers – I thought that was genius and quickly stole the idea.  I cut off the front pocket from the overalls and just zig zagged it right on the back of the quilt – it has snaps and everything, so it’s perfect to hold the cards in. 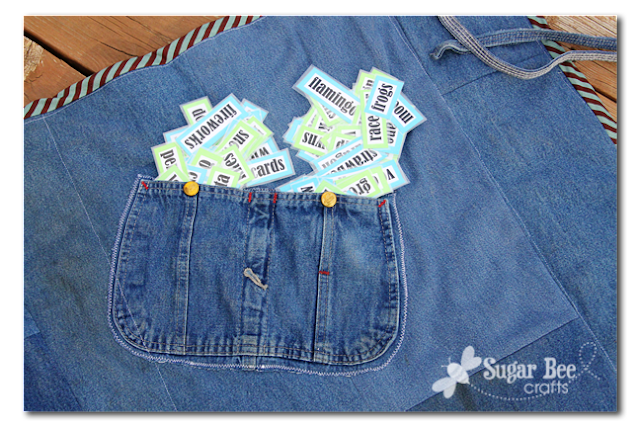 I borrowed  a laminator from a friend to make the cards durable – and it was awesome.  I think I need that machine!
A view of most of the front (quilts are so hard to take pictures of!): 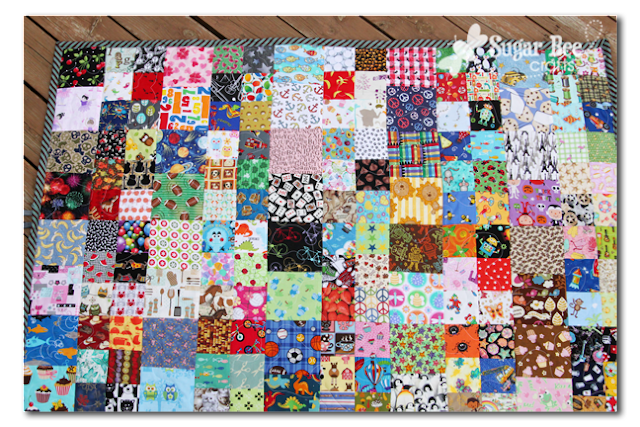 In this picture you can see I sewed in a couple of ties when I put the binding on: 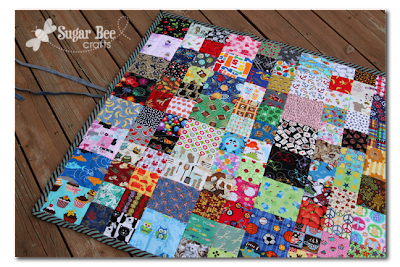 That way when I’m traipsing onto the football field with 3 kids in tow and dragging various chairs, jackets, etc, it’ll be easily transportable – I can hand it to a kid to carry and if they drop it, it won’t come unfolded or anything.  All tied up: 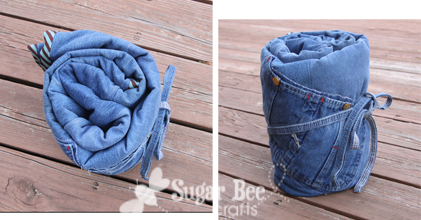 And of course, the fun of playing with it – – it’s been a huge hit so far.  The younger kids can point out things and name what they see, etc.  The older kids can read the cards and hunt around. 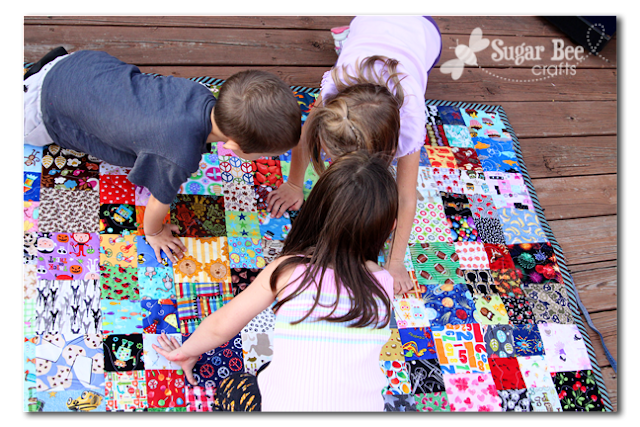 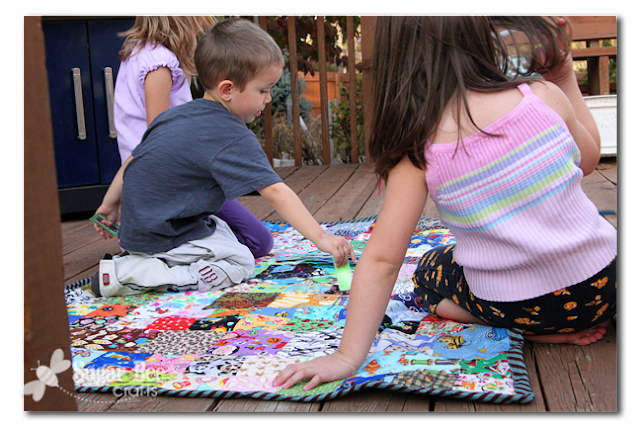 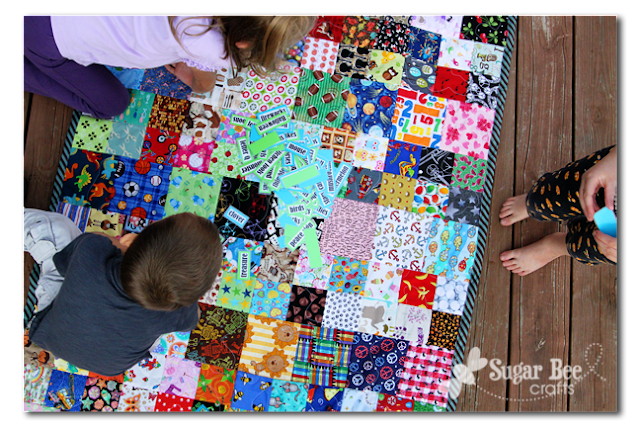 I love my I Spy Quilt – – you should make one!  Underneath it all, it’s just sewing straight lines – you can do it!

Along those lines, I have extra squares  I’ll sell for $20, including shipping, if anyone wants them – just email me, mandybeez at gmail.  They are the ones I didn’t use because they weren’t my taste, they were duplicates (whether exactly or in theme, like there were several owl fabrics), or I just ran out of room – I didn’t want a huge quilt.
My quilt: 40 large squares (6 inches) and 120 small squares (4 inches)
The leftovers for sale: 59 large squares and 82 small squares (if I counted right!)