3 shares
I saw this cute fabric at Joann’s and knew I need it.  I was thinking shorts and even cut the pattern pieces, but as I was laying them on the fabric, my older daughter said “not SHORTS, we want SKIRTS” – huh?  Ask and you get, I guess.  I knew that the would actually wear it if they had a hand in the design process, so Skirt it was. 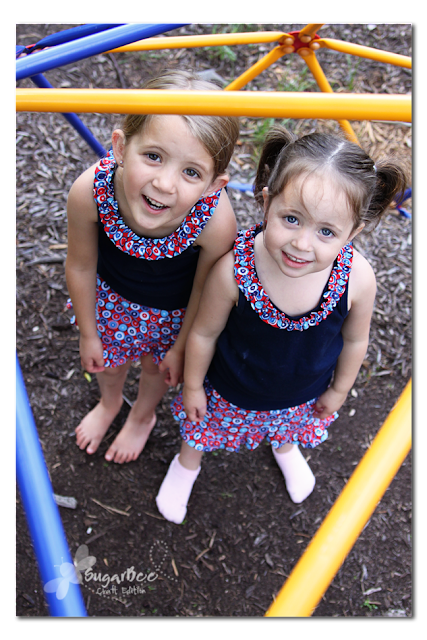 My only problem with skirts is that they are hard to play in – but lots of store-bought ones now have built-in shorts.  So that’s what I did.  Normally I’d look up a how-to, but I was without internet all yesterday afternoon, so I had to wing it.  But that means I whipped together a tutorial for you – let’s get started.
First I cut used a pair of shorts-under-skirt and traced around it on the fold of a T-shirt.  I was sure to put the bottom along the hem of the shirt so I didn’t have to hem the shorts.  I normally don’t like making shorts/pants via the tracing method because the crotch area always turns out a little wonky, but I figure this was under a skirt so it didn’t matter.  You can see more about this method of making pants at SamsterMommy so I won’t go into details.  So make the 2 pant legs and sew them together, but don’t finish the top/waist. 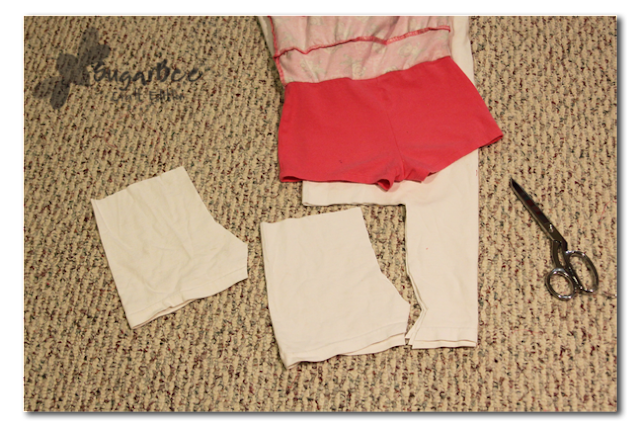 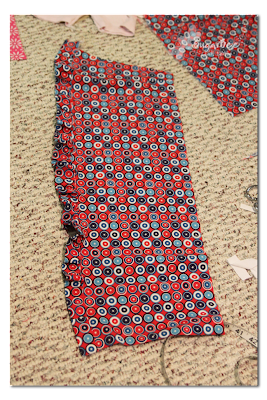 For the ruffle I thought it might flip up so I wanted the fabric on both sides.  I cut a strip of fabric 3 inches wide and folded it in half, wrong sides together.  I then sewed the raw edge to the bottom edge of the skirt using that fabulous Gathering Foot on my serger.  But you can gather it and sew it on the normal way too. 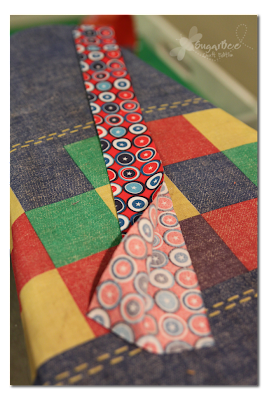 I thought it added just the right about of wow factor to the skirt: 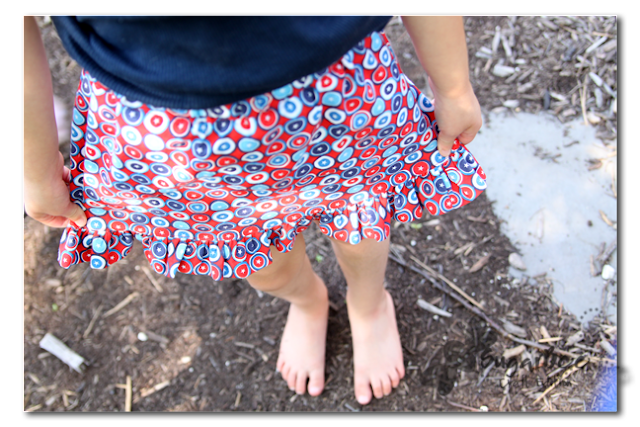 After adding the ruffle, sew the rectangle into a tube by sewing the end edges right sides together.  Fold down the top edge 1/4 in and then 1/2 (or however wide your elastic is) – I serged instead of the 1/4 in.  But before you sew that casing (tube) for the elastic to run through, put the skirt, wrong side out, into the shorts which are wrong side out.  Here’s a picture: 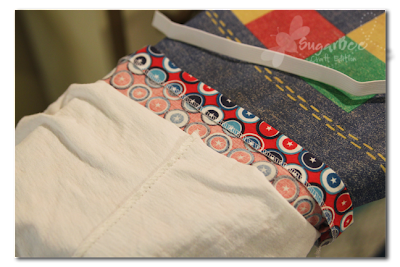 Then, slide the top edge of the shorts under the edge of the casing.  When you sew the casing, you will also be attaching the shorts to the skirt.  Hope that makes sense.  Thread elastic through and you’re done.
Moving on to the shirt.  Here too I wanted the ruffle to have material on both sides.  So I sewed a tube of fabric and turned with my trusty turning tools.

Then I gathered the strip: 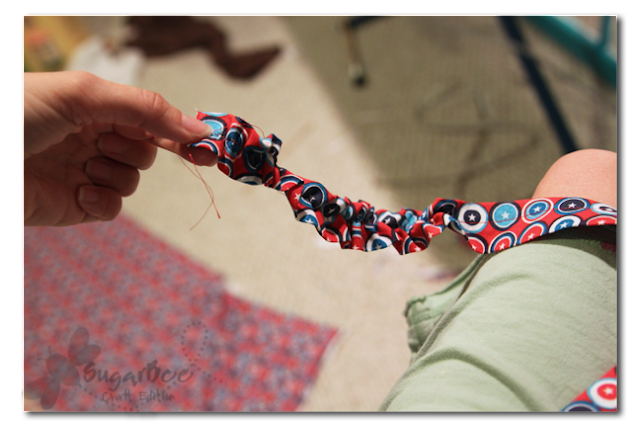 And pinned it to a $2 Old Navy tank top (that was one crazy sale!) 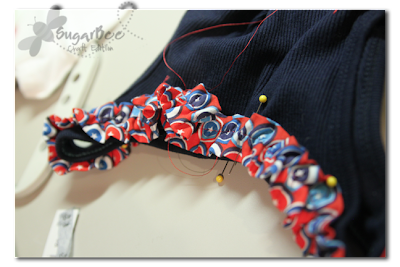 Then just sew along the gather stitching.  It brings the whole outfit together. 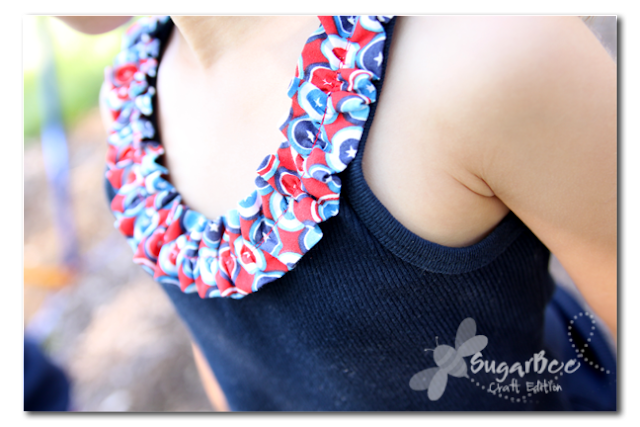 They turned out really cute.  For some reason I don’t have a great shot of the girls just standing still showing off the outfit – oh well.  I wanted to take pictures when they were playing to emphasize that with the shorts underneath they are good to go and conquer all sorts of jungle gyms! 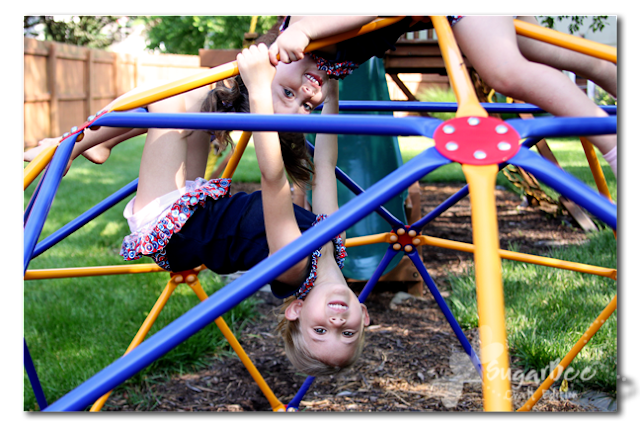 See the hem flipped up – but it’s okay because the underside is fabric.  And here’s the best posed shot of the outfit. 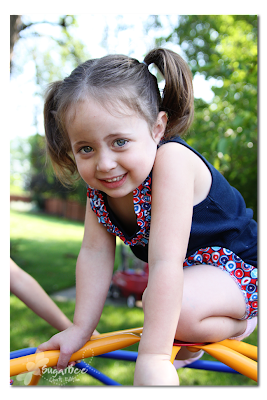 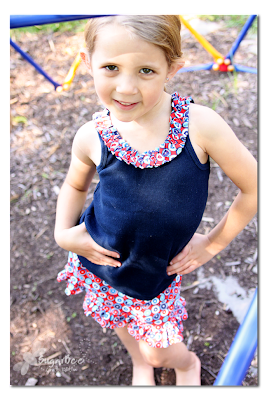 The fun just kept on going… 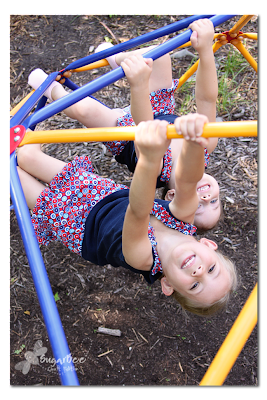