636 shares
Want the awesomest most fastest Pinewood Derby Car??  It’s that time of year, so I thought I’d let Trevor do a guest post about tips and tricks to make a fast car, using the car from last year….take it away babe….how to make and build a fast pinewood derby car: 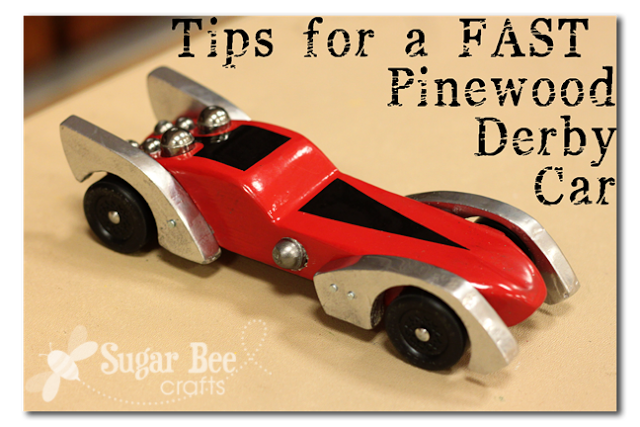 So you want to go fast?  Really fast?  Good.  So do we.  To make your son’s car fast, you need to help him follow a few simple rules and also apply a few tricks here and there.  For our area, all of these hints are legal, but make sure you read the rules in your area just in case. And remember to let your son do the work. It may take a bit longer, but he will have fun and will learn valuable skills.
First, from the engineer in me, a little review of the physics behind the race (for a complete physics review, go here or here).  All the speed in your son’s car will come from POTENTIAL ENERGY being converted to KINETIC ENERGY.  When the car is at the top of the track, ready to go down, it is full of potential energy, or the force of gravity pulling the car back to earth.  If the track were to suddenly disappear, the car would fall to the ground, converting the potential energy to movement, or kinetic energy.
Theoretically, the fastest the car can go is the speed at which it would be traveling as it fell right before it hit the ground. Of course, your car (or your son’s car) won’t be going that fast since it loses some of it’s kinetic energy to FRICTION and other forces. Friction losses come from the rubbing of the wheels against the side of the car, against the axles, and against the track. There is also a little bit of friction from air, called drag. Energy is also converted into rotational energy, i.e. the spinning of the wheels.
This post may contain affiliate links.

So in essence, we want to maximize the potential energy in your car and minimize the losses due to friction and other forces. While I can’t give away all our secrets, here are a couple of tips to do just that.

Weight
The easiest way to maximize the potential energy in your car is to make it as heavy as possible. Find out what the maximum weight is (usually 5 oz) and make sure you are right at that weight. Use an accurate scale and weigh your car throughout the build and design process.  Usually, additional weights will need to be added to your car. Tungsten is the recommended material for weights (denser than steel and safer than lead).

Put the weight towards the back of the car. On an inclined track, this will give you a little higher center of gravity, which means a little more potential energy.  Look at the car in the first picture. Most of the weight in it is in the back rear of the car. Just be careful not to put so much weight back there that it causes your car to do a wheelie.

One commonly used method is to make the car just a little heavy, then remove material at the race site by drilling a little wood out of the bottom of the car. This is the method we used last year. 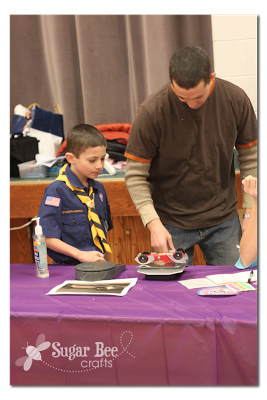 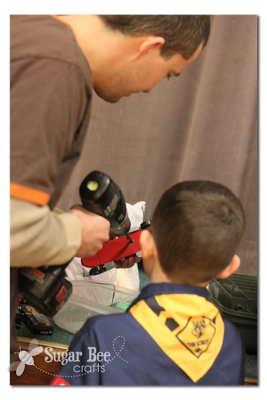 Friction
Next, we need to get rid of the friction. Lets start with the wheels and axles. The axles that come with the car are really just small nails with imperfections from the manufacturing process. If you look closely at a new axle, it will have small “fins” between the head of the nail and the shaft. These fins sit right where the wheel spins and will cause a lot of friction and must be removed. We did this by inserting the axle into a drill chuck for polishing. We have a drill press, but if you don’t, a standard drill will work as well, but you’ll need two people (one to hold the drill and one to polish). 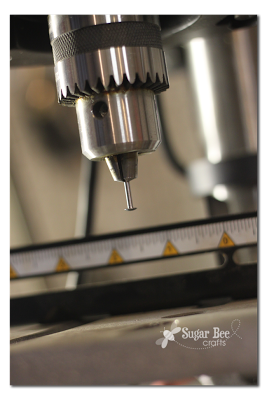 Next, use a small file to grind off the fins. Strangely, the best file that I had for the job was a file on my multi-tool. Hold the file parallel to the head of the axle and, while the axle is spinning, lightly touch the fins to grind them off. 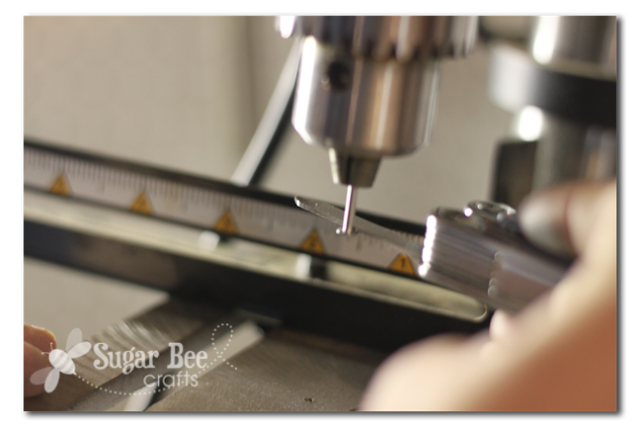 Then we start polishing the axles. This is a fun job that your son can do. Start with a rough grit sand paper and cut it into strips. Have your son hold the strip and pull it against the axle while it is spinning. Move the paper back and forth and change it out often. Fold the sand paper in half and push the exposed rough edge down gently on the head of the axle. Be careful not to pull too hard as you could bend the axle, which would really slow things down. 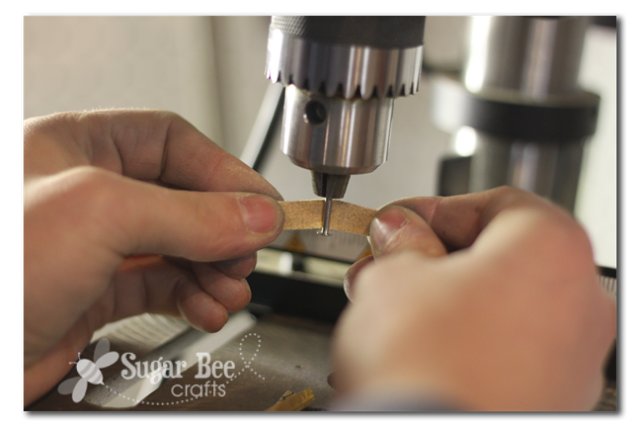 Move to a finer grit of sand paper and repeat the previous step. You can move through several different grits to eventually get down to a very fine (1600) grit paper. 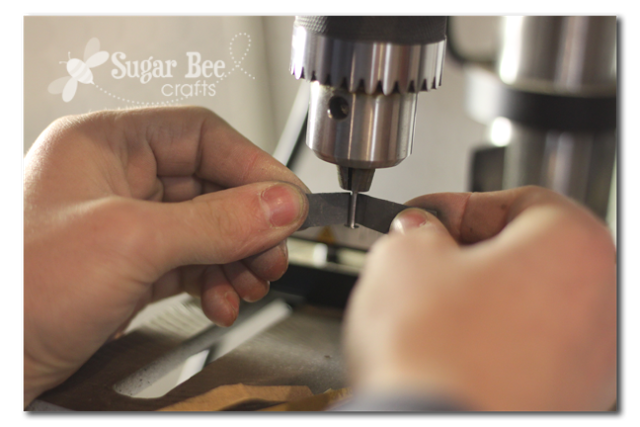 Once you have the axle mirror smooth, finish it off with a bit of steel wool. We added a little graphite powder to the steel wool and rubbed it into the axle while it was spinning. 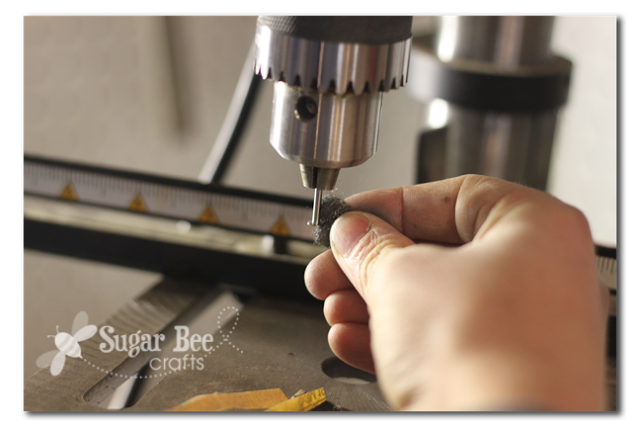 Another area of friction comes from where the inside part of the wheel hub contacts the side of the car body.  Make sure to leave a little space between the hub and the wheel so that the wheel is not pinched against the car. You can buy spacers to get the spacing just right. If you’re big into painting your car, you can also help create a smoother surface by not painting the area of the car where the hub will rub.  My son’s car had several coats of paint plus clear coats, and we didn’t want paint build-up to slow down the wheels. We used small stickers to cover up the axle locations before painting. After painting, we very lightly sanded the hub area and rubbed it with graphite powder to create a smooth surface. (Free painting tip: poke several pins through a piece of cardboard and then rest the car on top of the pins to elevate it slightly). 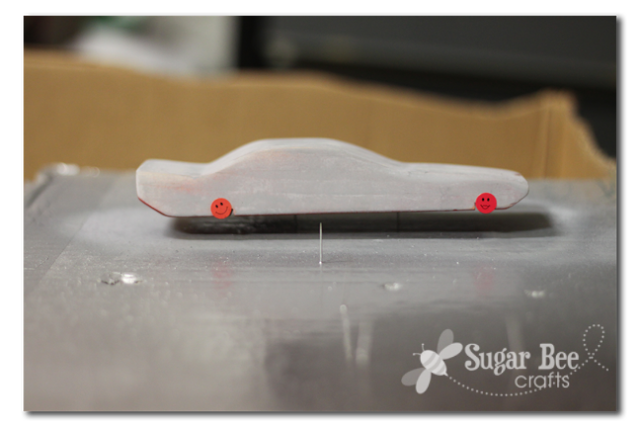 Axle Location
The next tip that we’ll share is axle location. The block comes with pre-cut slots in which to mount your son’s axles. However, I would not recommend using them as they are usually not square, meaning they will cause your wheels to be ever-so-slightly out of alignment, which could pull the car to one side or the other and slow it down, especially if the wheels ride against the edge of the track.

Instead, drill new holes just outside the grooves. A #44 bit is the perfect size, but may be hard to find at your local hardware store, so I’d suggest ordering it online. The new hole needs to be drilled in perfectly straight, so either use a drill press or a guide (like the one below).

Note that it’s better to put the new wheel location on the outside of the grooves rather than closer together on the inside.  Placing them outside gives you a longer wheelbase, which will help the car go straighter as it will resist turning forces. 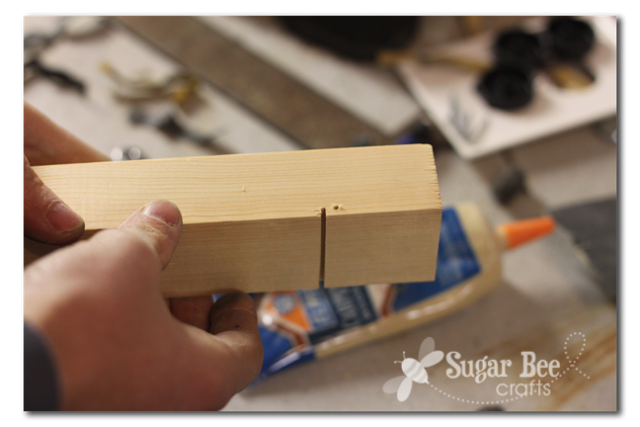 The last tip is one that most people know, but is also one of the most important. Use a dry, graphite based lubricant between the wheels and axles. There are several to choose from and not a whole lot of difference between them.  However, you will be amazed at the difference it will make in the speed of your son’s car. Add a very small amount between the axle and the hub, then spin the wheel several times. If you get a chance, do a few test runs as this will allow the graphite to work into the wheels.

Here is Reed’s car from last year coming down the track. 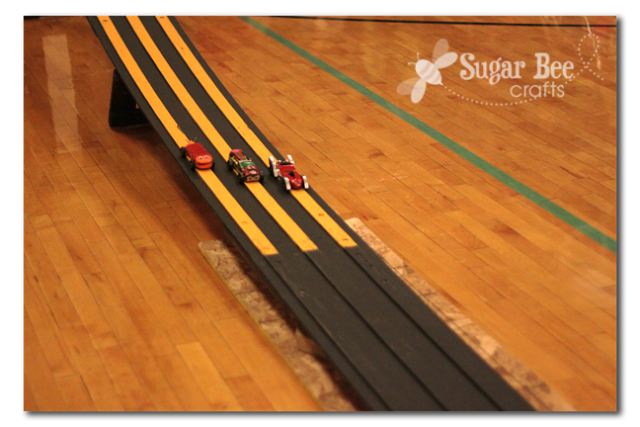 On a side note, our pack had fun, inexpensive, and easy to make trophies. They were small blocks of wood with Matchbox cars on top, spray painted gold. 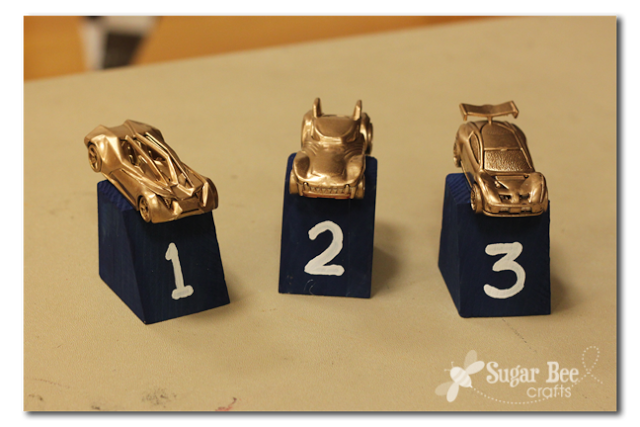 Well, I hope you both have fun making your son’s car. Remember to involve him in every step of the process. You can help him do most of the work while ensuring that things are done right. Be sure to explain why things must be done right and the benefit of taking time to do so. In my opinion, it should be fun for the boy but a little bit hard too, so that he remembers the effort that it took to build. That way, when he sees his car going fast down the track, he can equate hard work with positive results. Winning isn’t everything, but teaching your son that research, correct application of principles, and hard work creates positive results is a valuable lesson.

Trevor
blogging at So I Married a Craft Blogger

Make your own Pinewood Derby Trophys