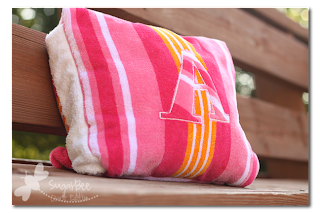 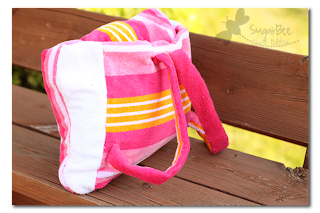 My list of crafts to-do gets longer everytime I host a link-up.  I found this last week over at The Train to Crazy – I’ve been making hooded towels since before they were the cool thing to make, but I had never thought to do the backpack convertible thing.  Follow the link for the tutorial.  Here are a few things I have to add:
I used a towel from Target – it was 7 feet long.  So instead of buying 2 smaller towels  like the directions call for, I just bought one and cut the pieces off of one end, like so: 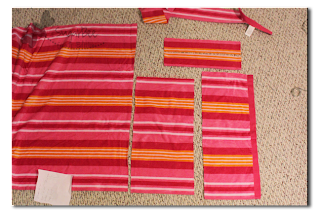 Then you’ll have a raw edge on one end, so you need to hem it like you would hem anything (turn under then turn under again and stitch into place): 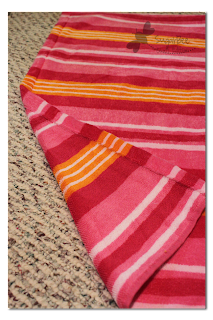 When attaching the hood to the towel, I couldn’t quite tell in the picture in the tutorial, but there will be a bump of material on the inside.  I don’t mind this because it’s enclosed so no raw edges show – it’s called  “french seam” and I learned about it when I made my baby sling. 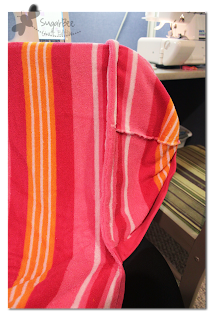 Now, about here is where I started cursing this whole project.  This happens everytime I sew hooded towels.  There’s a lot of bulk and my machine doesn’t like it.  By the time it was all over I think I broke 5 needles.  Enough that I had to take a break during the project and run to the store to buy more needles.  Ugh.
And remember that I bought a bigger towel than the instructions?  Well it was wider, not just longer.  After sewing on the pocket I realized that my towel wouldn’t be fitting into it.  So I seam-ripped it off and opened it up and added some strips of fabric (I happen to have some terrycloth) to the pocket.  While it was off I attached the straps so I wouldn’t have to attach them through both sides of the pocket (trying to cut down on needle breakage). 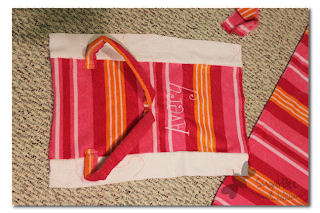 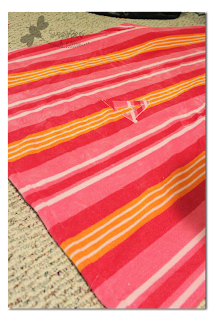 It turned out cute in the end – the perfect gift for the little’s girl’s birthday pool party.  Next time I’m not sure if I’ll use a beach towel.  The hooded towels I have for my kids are made from bright colored bath towels – I like them for kids because they’re not too big.  But beach towels come in such cute material, it’s fun to use it. 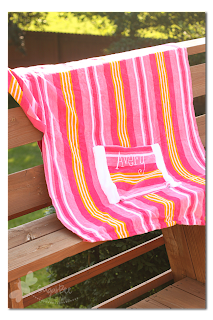 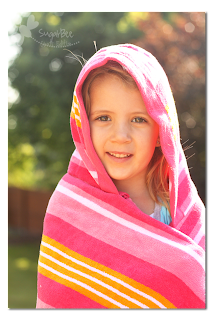 Thanks again to The Train to Crazy for the free tutorial!

Be sure the visit the link parties!!
Thanks for checking out this post from www.SugarBeeCrafts.com – – click on over to read it in its entirety – you’ll love it!