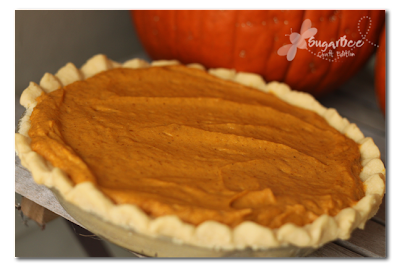 Are you intimidated by pies??  Don’t be – you can do it!  Last year I tried a couple of crust/pastry recipes, and the best by far was my mom’s – the secret was buttermilk.  So pick a recipe that calls for buttermilk, or use this one:
(makes 2 crusts)
1 C Shortening
1/2 stick Margarine
1 Tbsp veg oil
–squeeze all these butter-type products together
3 C flour – mix in (with fingers – not too much!)
1/2 C buttermilk (you probably won’t use it all)
dash of salt
–bake approx 10 minutes at 350

So those instructions were for making crust by hand – last year I discovered that the food processor worked wonders – throw it all in and hit the button.  Another tip is to roll out the crust onto wax paper – then when you put it on your pie pan, just pick up the whole wax paper with the crust on top of it and flip it over onto the pie pan: 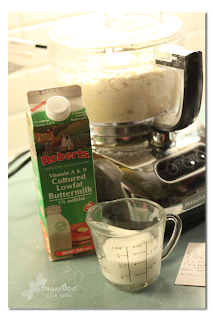 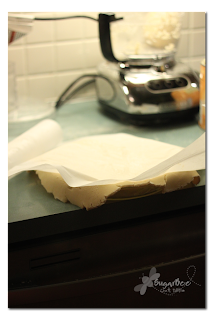 Now, I made a Pumpkin CHIFFON Pie – growing up, I thought this WAS pumpkin pie.  I probably didn’t have “real” pumpkin pie until college and thought “was IS this stuff – ick!”  Needless to say, I prefer the “chiffon” version – if you’ve never had, you must!  It is light and fluffy and delicious.  Best topped with whip cream.  Here’s the recipe, with commentary from my mom:

Directions:
Separate 3 eggs. Place 3 egg yolks in large saucepan and 3 egg whites in a clean glass bowl (cover bowl with a paper towel and set out on counter – Do NOT refrigerate). Add ½ cup sugar, pumpkin, milk, and spices to the egg yolks in the pan. Completely blend. Cook over medium heat stirring frequently-constantl­y until mixture has thickened (at least 10 minutes of simmering popping – if you haven’t been burned by popping molten pumpkin mixture you’re not doing it right). In a cup add 1-tablespoon gelatin (1 packet) to ¼ cup warm water. Let dissolve (make sure it is completely mixed in and dissolved). Pour gelatin water into thickened pumpkin mixture. Stir in and mix completely. Set pumpkin mixture in a cool place (on porch, in garage, in refrigerator, or on counter – will take longer) until cooled. Stir mixture occasionally to speed up cooling. When pumpkin mixture is completely cooled begin chiffon mixture. Whip 3 room temperature egg whites in mixer until stiff peaks form. Slowing add ½ cup sugar to egg whites. Fold in egg white mixture into pumpkin mixture. Do not beat mixtures together; you want to keep the fluffiness of the whipped egg white mixture to make the pie light…hence the ‘chiffon’. Pour blended mixture into a cooled baked pie shell. Place in refrigerator (or cool place) and let set.

So here I am, stirring away at the popping pumpkin (wearing that fab apron from Sonshine Designs): 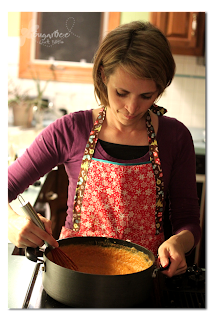 And here is the pumpkin mix cooling outside – as a kid I remember having to run out to the porch and stir the pot that was sitting in the snow.  I guess you could use the fridge, but where’s the fun in that….. 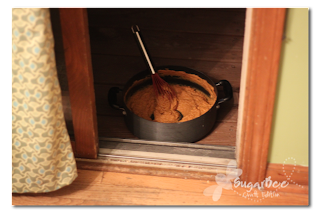 I made 2 pies this year for my husband’s work food day – he was nice and left one at home for me (well, and the kids..) 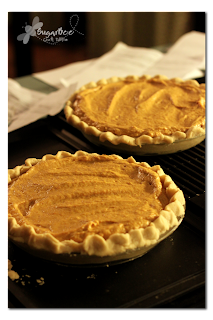 Last year my mom was out-of-town right up until Thanksgiving, so I was assigned to make all the pies – – here’s my post about it from my family blog last year.  It sounded intimidating, but I did it and I want all you out there to know that YOU TOO CAN MAKE A PIE – just TRY IT!! 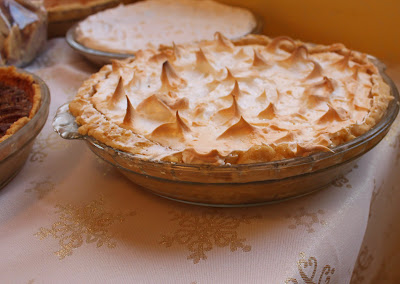 I was put in charge of pies this year. YIKES! My mom is the pie maker extrodinaire. But she had no time and so it was assigned to me. No Pressure! But what’s funner than making pies – having people over to make pies (and having them bring their children to distract my children) – so my cousin Kate and SisInLaw Krista joined in. We cranked out about 20 pie crusts between us and filled them with deliciousness. My crust edges weren’t as pretty as my moms (or Kate’s) but they were just as yummy – due to the buttermilk and 3 kinds of butter – pure healthiness. The only mishap was melting my spatula into the pumpkin chiffon (it’s probably happening in the picture below and I’ve yet to realize it). On my Wish List – silicone cooking utensils. End results: 2 pumpkin, 2 chocolate delight, apple, lemon meringue, peanut butter cream, pecan. All yummy. 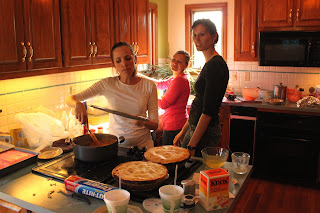 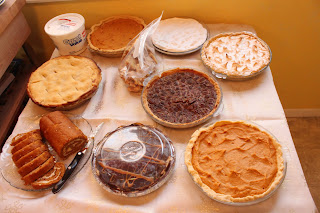