0 shares
Alright, all you with your camera previously on the “green square” – did you try out the ISO?  Flip your camera to “P”?  More about that HERE.  We’re moving on today, but still practice with different ISO settings so you can see what it can do for your pictures.
Today I want to touch on something called “Focus Lock”.  First grab your camera (still set on P – you can’t change anything if you’re in full auto) and find the AF button (auto-focus) – it looks like a square with little solid rectangles in it – it’s circled in the picture below.  In the picture the arrow points to your wheel where you can scroll through your AF choices. 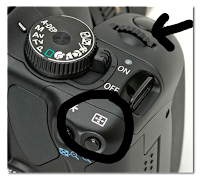 Your AF is probably set to Automatic Selection.  You want to change that.  Let me tell you something you might not believe:  you are smarter than your camera – you are human, it is not – you know more.  There are still times that I think my camera knows better than me, but I’m working on that.  Anyways, YOU know what you want to be in focus in the picture but your camera doesn’t – let’s say you want to take a picture of your child off-centered – you know you want the child in focus, but your camera might not focus on them because they are off-centered.  So never let your camera pick your focus point – you can do it! 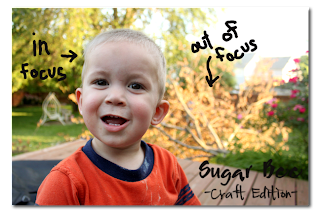 Push that AF button mentioned before and scroll until the dot in the middle is lit up – that will set your focus point always in the middle.  Test it: when you push your button to take a picture down half-way to focus; when you’re looking through the viewfinder, does the red light only light up a dot in the middle? (did you know that to focus a digital camera you push down half-way, let it focus, and then push it all the way to snap the shot?)  That red dot shows you your focus point – and you want it right it in the middle.
Now wait – did you catch on – this means the focus will only be on the middle of your picture.  But pictures look best when the subject is off-center – how’s that work?  Use the trick called Focus Lock.  Aim for what you want focused (my little boy’s face) – put it right in the middle of the viewfinder – push down half-way to focus on him.  Then while still holding the button down half-way, pan slightly to the right so he is in the left of the frame, then push the button down the rest of the way.  It’s called focus lock because you lock the focus on him by pushing down half-way.  Then when you move the camera, it doesn’t refocus – it keeps him as the main focus even though he’s not centered anymore.
Does this make any sense?? Go out and try it.  Find an object set away from it’s background (like a post across the street from a house).  Take pictures with the object in focus and with the background in focus.  Try to put the object off-centered in your pictures.  Here are the pictures (SOOTC: straight out of the camera) that I took when I was in my class (I was actually practicing manual focus, but that’s irrelevant) – I was a beginner at focus lock, just like you, but I did it, and so can you! 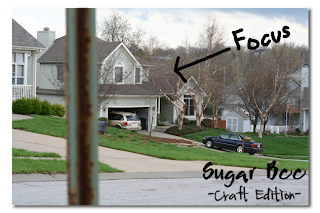 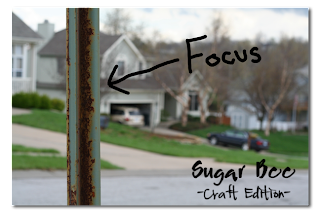 Really, let me know if you have questions – I’ll try my best to answer them, or I might pass them on to my photography friends who know way more than me…