Do you remember this shirt?? It’s from a What-I-Wore-Wednesday,HERE, but it went CRAZY on Pinterest because people thought it was a tutorial.  Side Gathered Shirt – Tutorial. 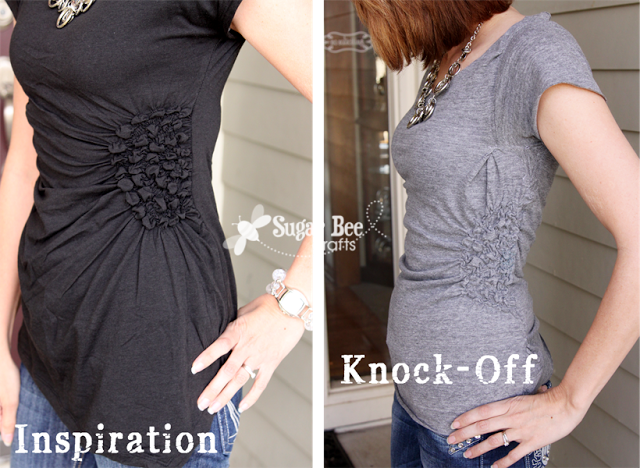 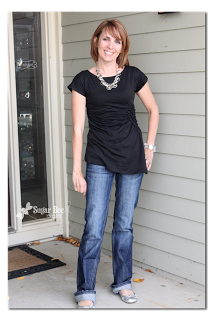 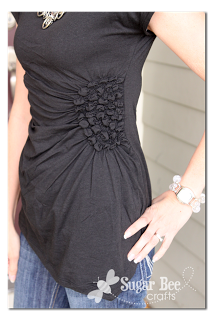 Well, for all you that have been waiting and waiting on this, NOW it’s a tutorial – wahoo!!  (awesome pose I have going, I know – but in the other picture my eyes were close, so you get this one) 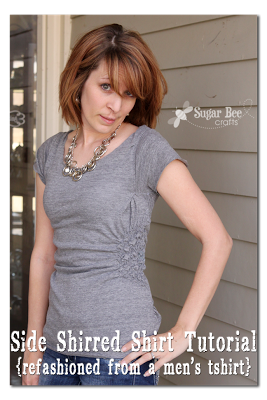 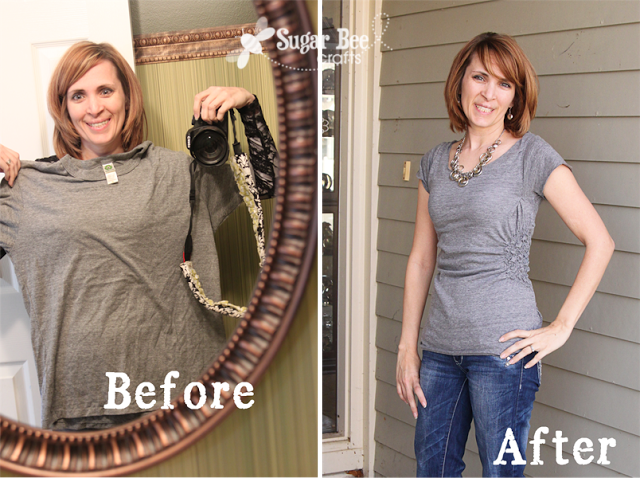 –> First you need a big tshirt.  The original shirt was a pretty thin tshirt – you know, how some tshirts are regular feeling, and some are thin.  So I knew I wanted a thin one so it would drape nicely.  I scoured the mens section of the thrift store and hit the jackpot – one that was plain (no decals) and thin (see how the light comes through it) – perfect.  I’m sure people were thinking “why is that crazy lady and all her kids feeling each shirt in the men’s section??” 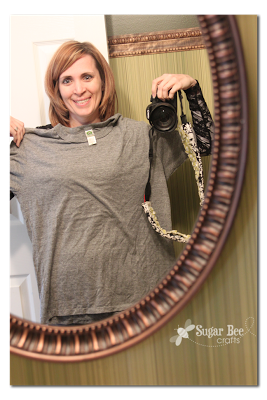 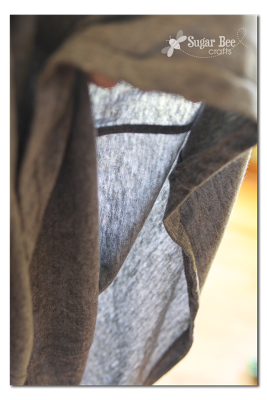 Don’t be scared of it – it may be your new best friend!  I love sewing with elastic thread – it just makes things more fun.

For posts about using elastic thread in your bobbin:
–Shirring (sewing with elastic bobbin thread) hints HERE and HERE
So, handwind your elastic thread on your bobbin.  Also, you can change your needle to one for knits if you want.

To gather the side, you are going to sew rainbows of loops.  I drew a picture so you could see what I mean – there’s a couple loops in the center, then 4 archs of loops surrounding it.  I made it one continuous line of sewing: 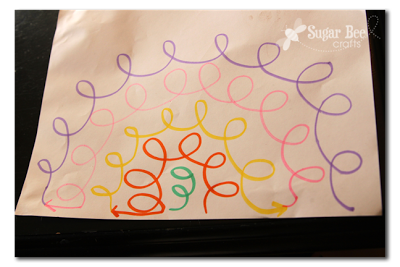 It’s several half-circles, all looped.  I used a fabric marker to draw on my shirt the first row, but just eyeballed it after that.  I’m not going to say this was easy – it’s a bit tricky.  It does get better as you work your way out from the middle, so stick with it.  Try to hold your shirt flat as best you can and that will help. 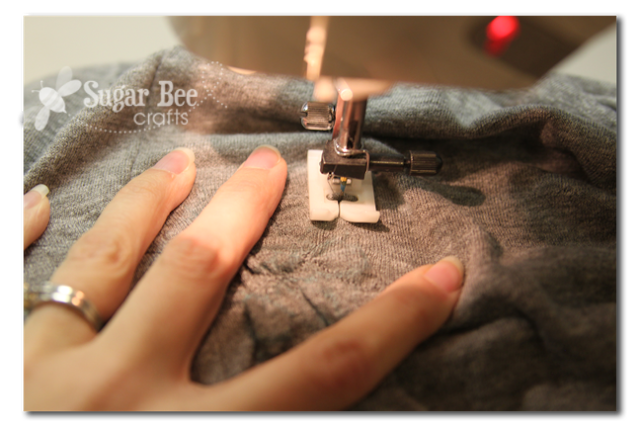 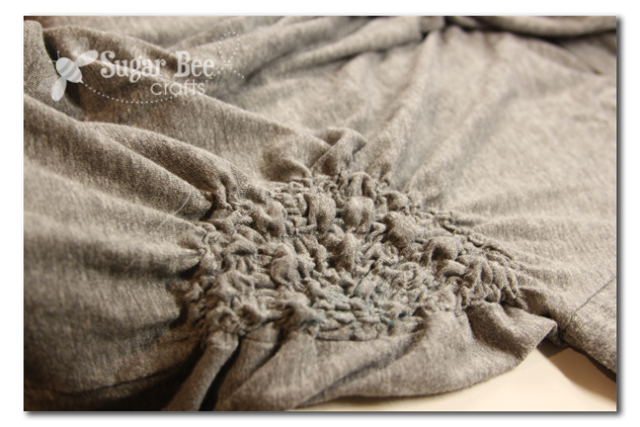 Here is what the underneath side looks like – you can kind of see the loops if you look close: 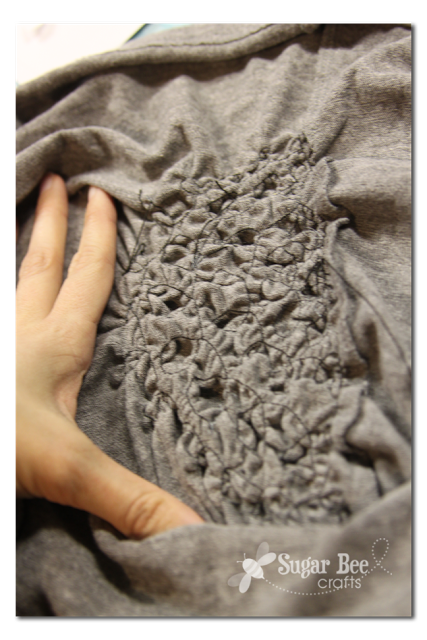 Now, as mentioned in the this post with the shrinking shirring video, – you need to steam the elastic thread so it’ll shrink and pull in on itself – – use your iron to squirt steam on it: 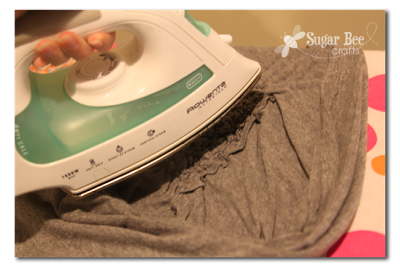 Now, time to alter the shirt to fit – – here’s the size difference: 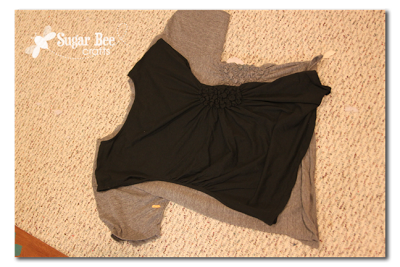 I started by turning it inside out and sewing on that dotted line, taking in several inches.  After that I kept trying it on and taking in different spots – shoulders, more on the sides, etc.  It was tricky and it’s still not quite right.  Kudos to all you who refashion giant tshirts – it’s tricky! 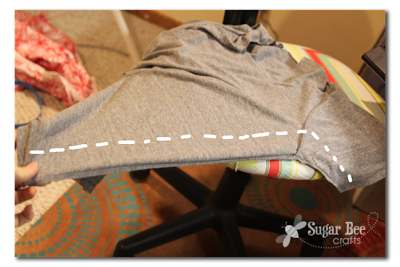 Here’s a side view of the shirring and refashion.  The shirring looks pretty good – you can kind of see where I tweaked it to fit better by pulling it tighter across the chest and tacking it down – that’s why there’s a weird spot near the armpit: 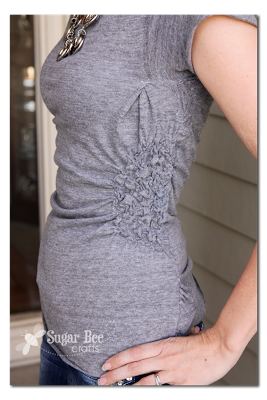 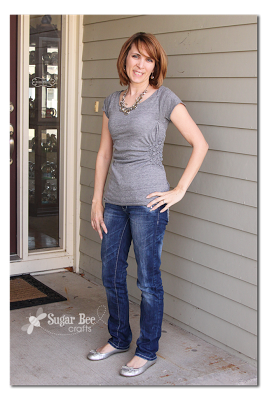 For the neck and arms I ended up just cutting off the ribbing and leaving it as-it.  I tried to hem it in a spot but it was really puckery, so I unpicked it and thought leaving it looked okay and just went with it.

It was also really big across the shoulder area in the back and it’s pretty obvious where I took it in.  I think next time I’ll grab a shirt that’s only a size or two bigger, instead of extremely big like this one (I wear a small and it was an XL): 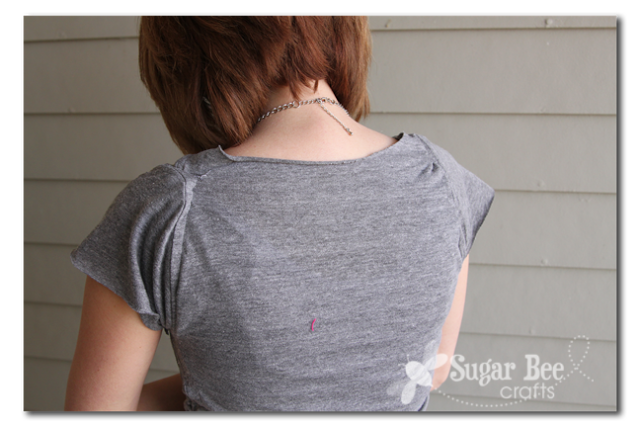 But overall, I’m pretty happy with my first attempt – you’ll have to let me know if you give this a try!! 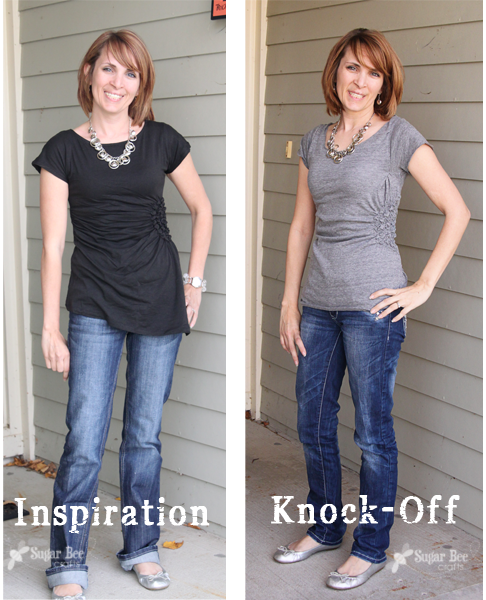 Enjoy your Side Gathered Shirt!!