I was able to make cupcakes for a baby shower a few weeks ago – happy day!  I have seen so many cute cupcakes out there – aren’t cupcakes all the rage right now?? – and I’ve been wanting an excuse to make some.  The theme for the shower was pink and flowers, so I made plain cupcakes topped with flowers made out of Gum Paste.  I had never used gum paste before, but it was kind of like fondant except that it dried hard.  I used the tutorial over at the Make It And Love It CAke Series (love that series – makes me feel like I can actually tackle cake-decorating).

I made some of my flowers curved out and some flat – but I loved the curved ones most.  I didn’t have a “molding cup” and I’m cheap so instead of buying one I put the flowers out over my measuring spoons.  By the end I had every spoon I could find on the counter with gumpaste flowers drying on them. 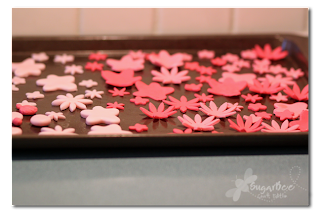 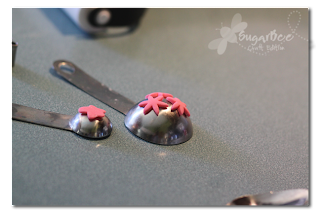 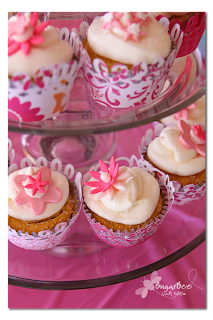 The cupcakes were lemon with a raspberry filling – the cake was a mix (with extra oil added) and I made the raspberry filling by blending the raspberries and heating it and stirring in sugar and cornstarch.  I found a tutorial on filling cupcakes, but of course I can’t find the link now.  Basically I cut a cone-shape out of the cupcake and put in filling, then cut a piece off the cone so it was then a lid and put the lid back over the hole in the cupcake.  I thought they were pretty yummy.  And I made those cupcake liners too – cute, right? 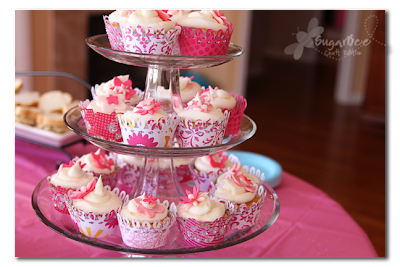 And I had nothing to do with anything else party related, but I had to take a picture to show you these flower balloons my friend made – just 5 pink balloons and 1 yellow balloon – genius!
She hung them around the entryway to the room – super cute. 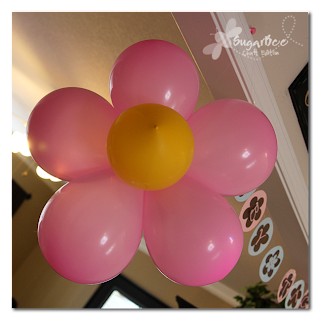 Have a great Halloween!!  Save those candy wrappers so you can put them to good use….. (do you think the kids get annoyed when I say “don’t rip it open – bring it here so I can cut it for a nice edge” – I’m sure they just think I’m crazy….)