This post may contain affiliate links for which I receive compensation; all opinions are my own.

If you’ve been reading my blog for a while, you’ll know that I am a die-hard family costume person – I just LOVE doing a family group costume!!  So today I have the idea that we went with last year – the Easy Family Costume Idea – SCARECROWS! 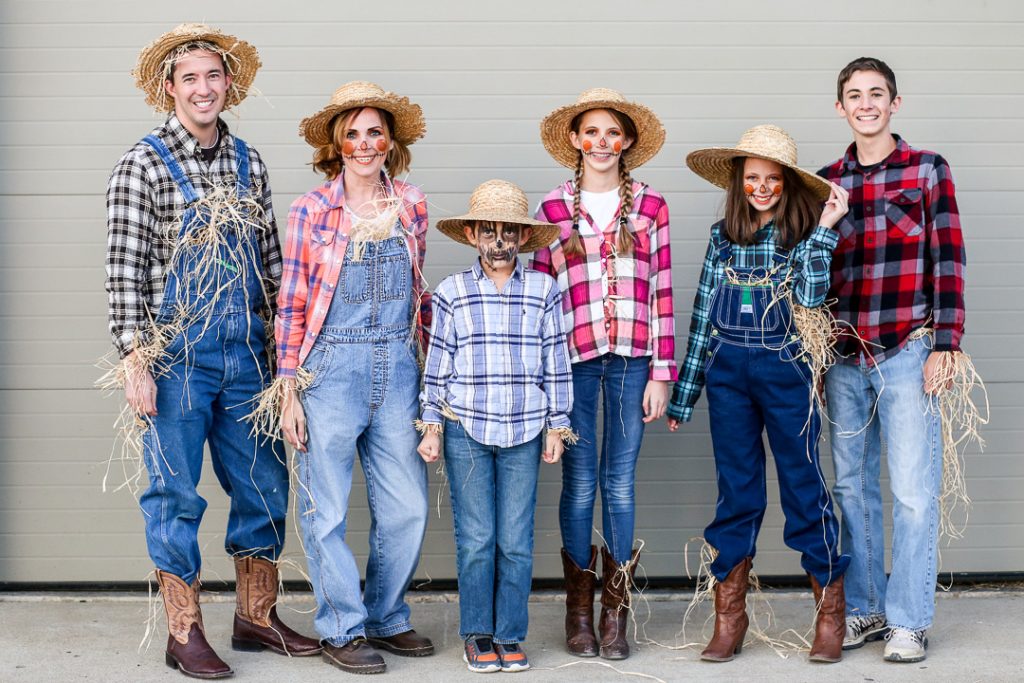 Every year we debate our family costume and can never decide and then the week of Halloween we end up pulling something together last minute that turns out to be awesome!  This post may contain affiliate links. 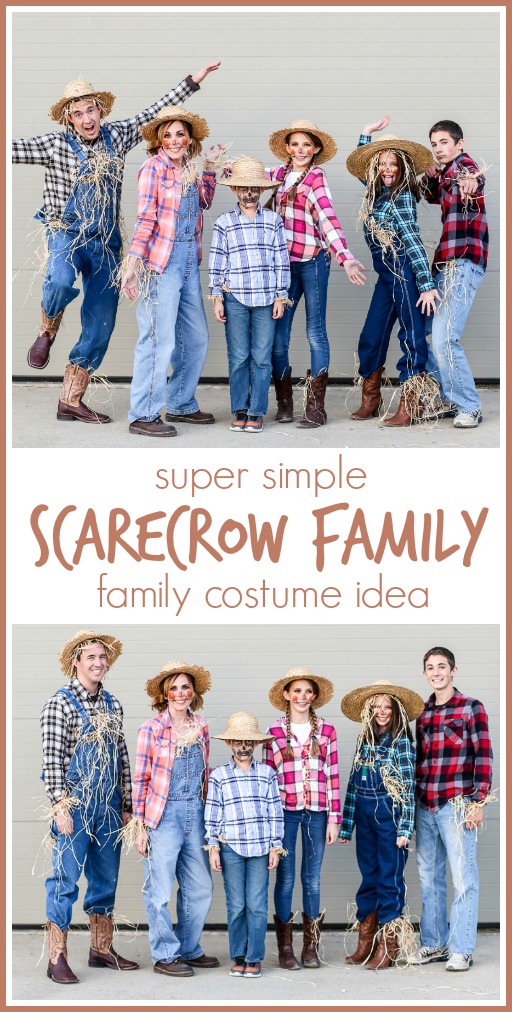 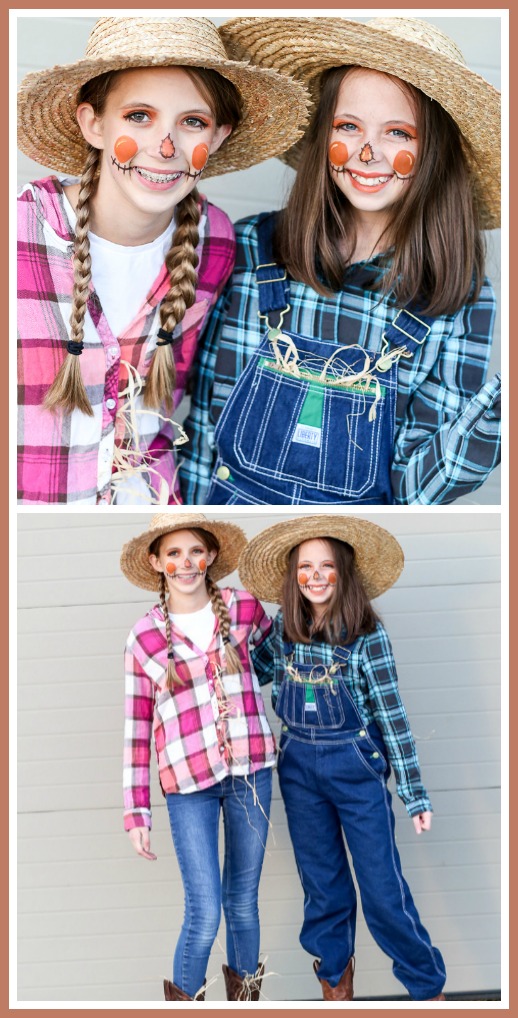 How to Make Family Costumes

So I know what everyone things – that your kids won’t be on board with a family costume.  It’s okay, mine aren’t really either!!  BUT, it’s a compromise.  We do the family costume thing for events like Fall Festivals at church or work parties, and then for school and trick or treating the kiddos can all pick their own individual costumes.  It’s a win-win!  I’m sure your next thought is that doing more than one costume is a lot of work – well, we just aim for simple!  So the simpler the group costume, the better!!  That’s how we make family costumes, just by using things that we can find that we mostly have on hand.

In year’s past we’ve been:

Bandits/Robbers (bought striped shirts, then we all had black pants already, and for the policeman bought a badge from the dollar tree)

Angry Birds (this one actually WAS a lot of work – but totally worth it!)

We’ve also done star wars and then football players (the baby was a football!), but that was before I thought to blog about it!

This was a super easy family costume idea to pull together.  My 9yr old said he only wanted to be a scarecrow if he could be a creepy one (hence the creepy makeup and no smile in all the pics!), but hey, as long as he’s on board, I’m okay if he wants to take creative liberties on the theme 😉

plaid shirts (most of us had these, and I grabbed a couple more at the thrift store) and boots (well, the boys didn’t have boots – oh well!) and overalls or jeans

straw hats (I found these ones at Michael’s – I think they’re meant for fall decoration?! – these ones looked great too and I might have tried them if I had more time to order) 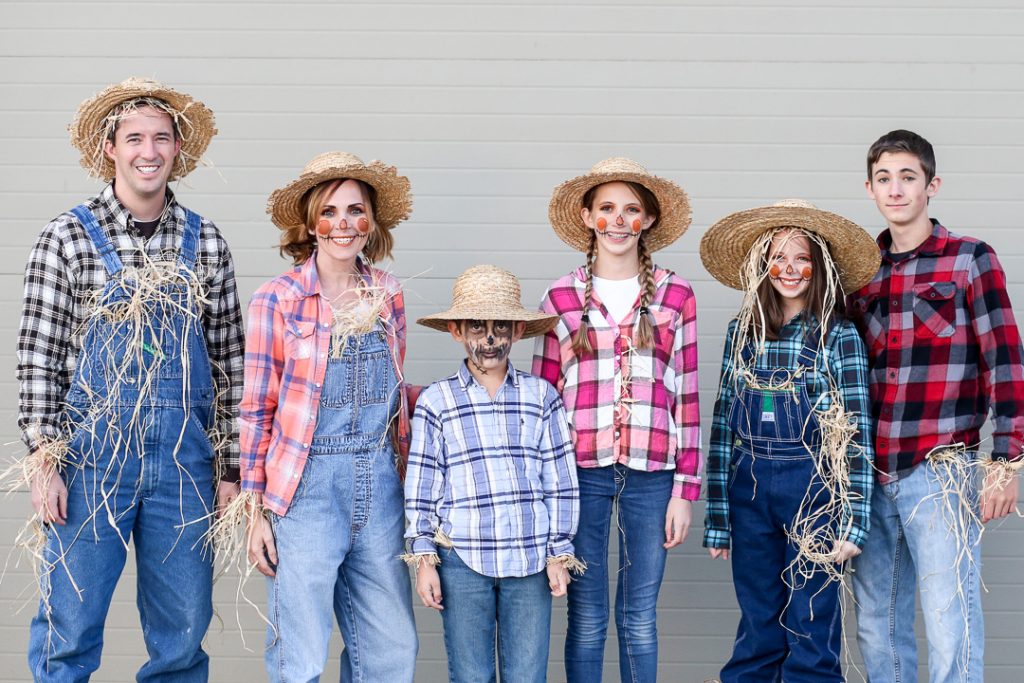 How to make a Scarecrow Costume

Straw Hats: we took the straw hats and tried to “distress” them – cut up the edges, stomped on them to break them in, even burned the edge on a couple of them. You could use this hat from Amazon and not have to do any distressing.

Outfits: we just wore plaid shirts and jeans or overalls, everyone kind of did their own thing

Raffia: once you’re dressed, stuff raffia in random places like you’re a stuffed scarecrow. Coming out of the buttons of the flannel, in your pockets, in the tops of boots.  We even tied some on hairties and then slipped those onto our wrists so that it would be sticking out of our sleeves. 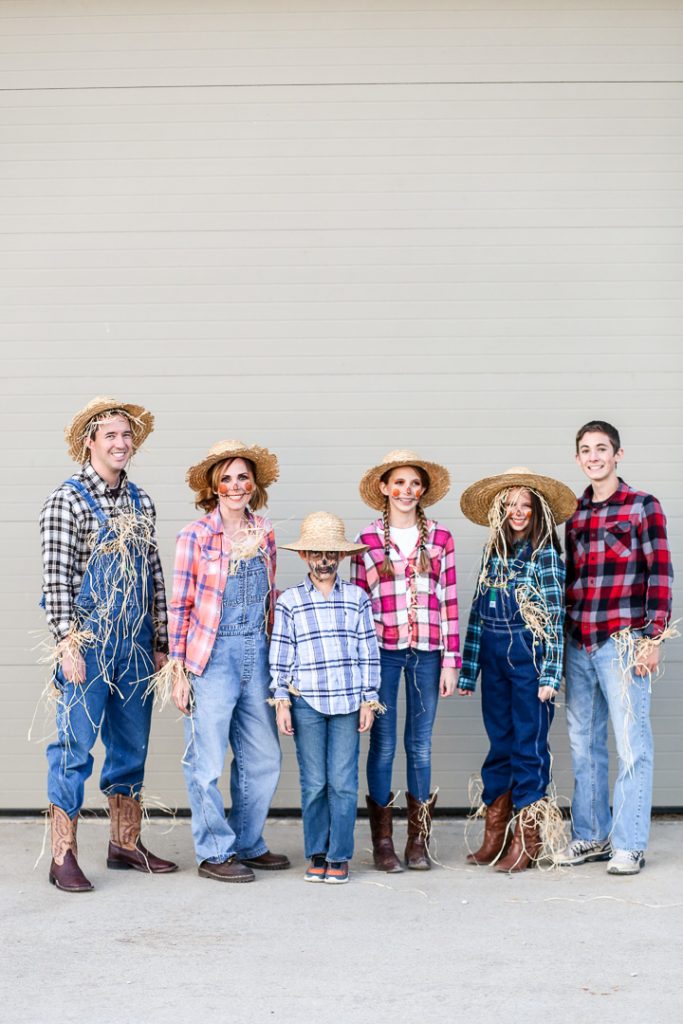 Makeup: all costumes are better with exaggerated makeup!!  As mentioned, my 9 year old wanted “creepy scarecrow” makeup.  The girls and I went with fall rosey cheeks and “stitches” smiles.

Have you ever noticed that there are some super inappropriate ideas for teen costumes out there?!  My girls loved this idea and I loved that it was cute and simple and fun.  It was a great costume idea for a teen or tween. 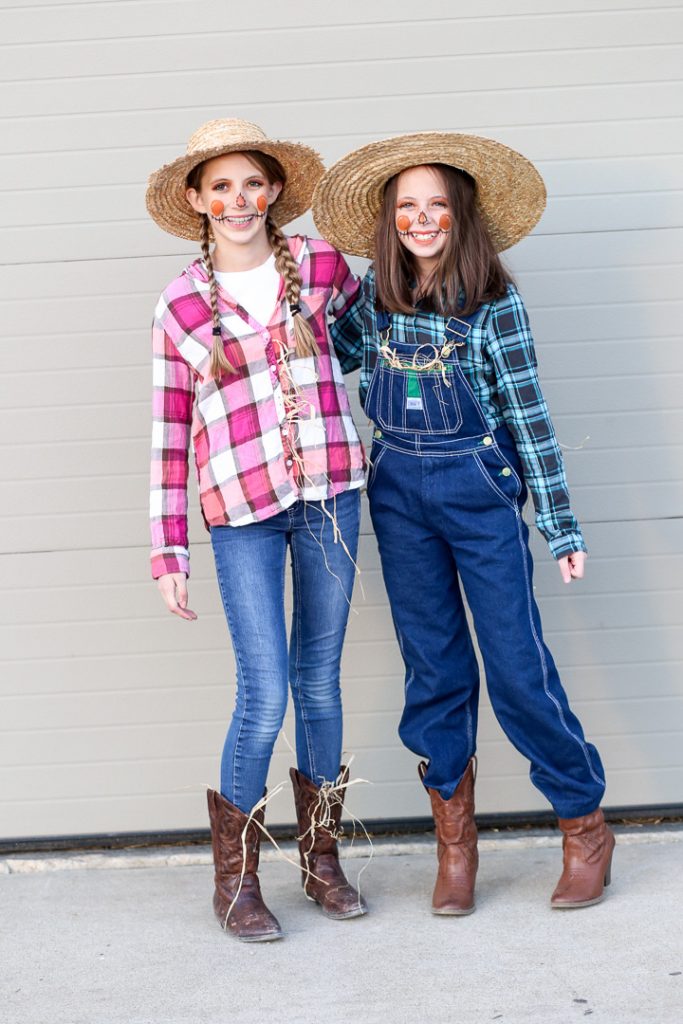 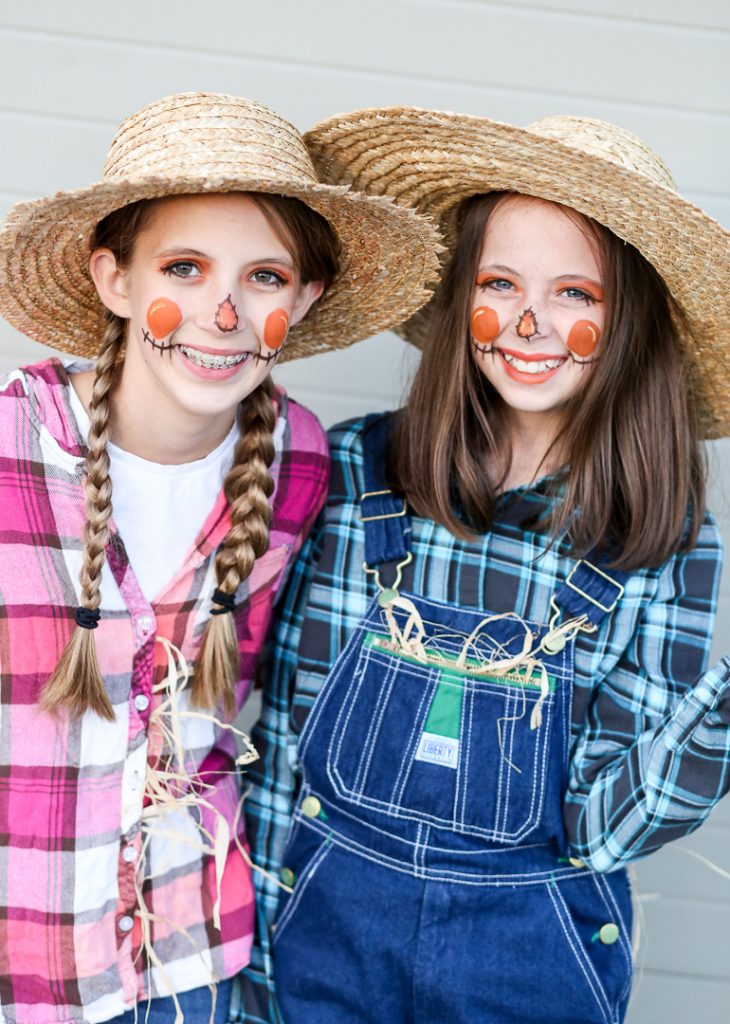 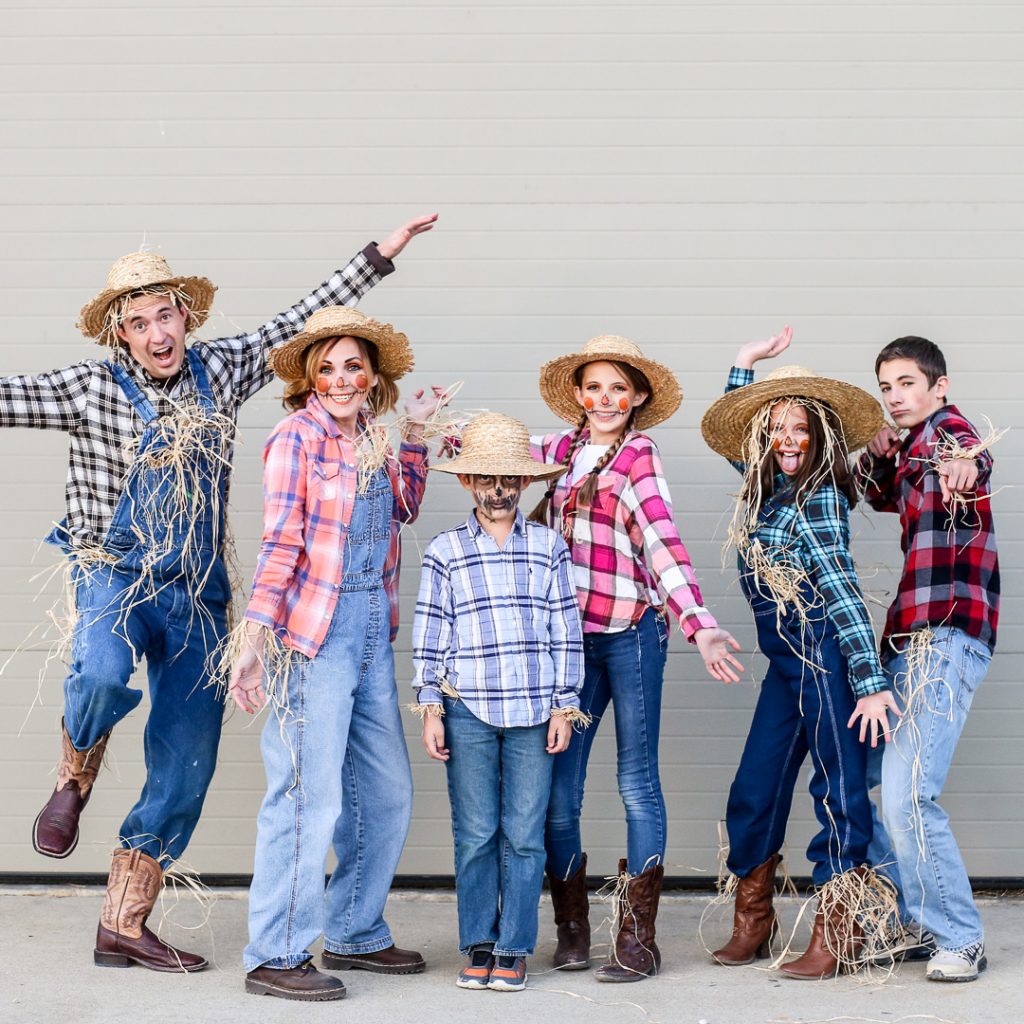 If you are browsing family costume ideas, I have a bunch of others here: Family Costume Ideas