What you’ve been asking for – the next installation in our house-building story.  And this one is hard to write – you know, when you buy a house you have to stop looking on realtor.com cause you keep thinking “What If” when you see other options.  This is like that – as I took a step back to our other house plans, I thought, I like that plan! What if!  But it’s not what we ended up going with – and I do like what we ended on.  So let’s walk through this part of the story…

As I mentioned when I talked about the land, we were spending every spare second for months hashing out house plan ideas. Late night after late night, for months.  It’s weird to wrap up months and months of life into one blog post.

We had a few general ideas of things that we wanted – master on the main level, upstairs kid rooms, guest room, formal living room, pantry, open concept, craft studio, etc.  Spoiler alert – what I’ve learned from this whole process –  building a home doesn’t mean you’re building a dream home…. but it’s still dreamy.  You don’t get everything you want – well, maybe if you’re a billionaire, but with a budget you have to be a grown up and not get everything you want.  But that’s okay!  It’s still dreamy. But yes, there is a ton of compromise.  I think about the only thing on what we thought was our “non-negotiable” want list that we kept was master on the main level.  Everything else ended up being negotiable – who knew.

And so we found a builder, gave him our want list, and he had a house plan recommendation for us, and in general we liked the one he recommended.  We had been browsing a ton of plans online and we liked his out of all of them.

Trevor bought some home design software so we could work on the house plans. There were a few tweaks we wanted from the original plan, and that turned into a few more, and pretty soon, we had a pretty different layout than where we started.  But it worked great and had a cute farmhouse feel. 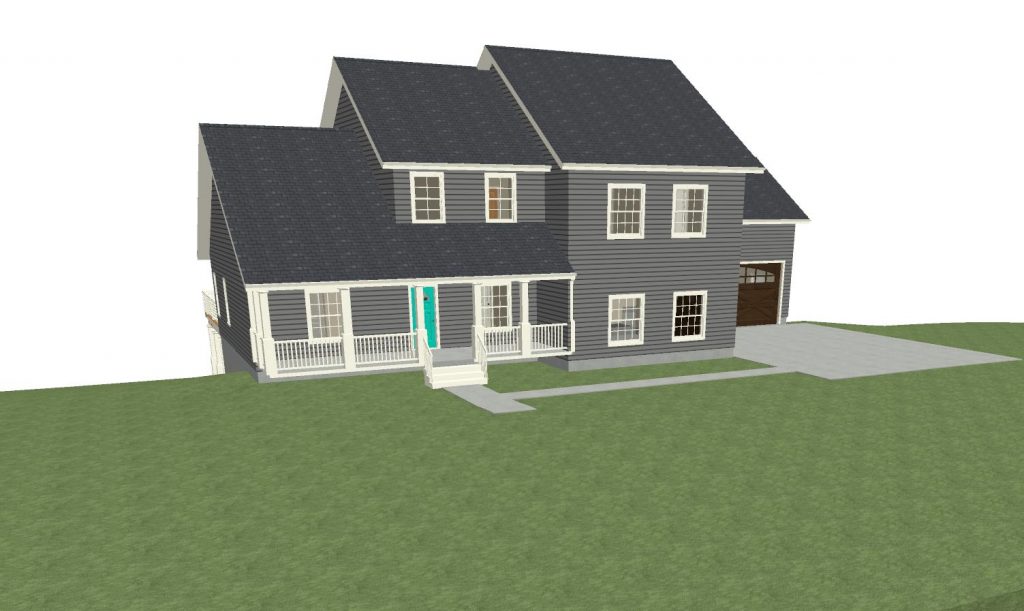 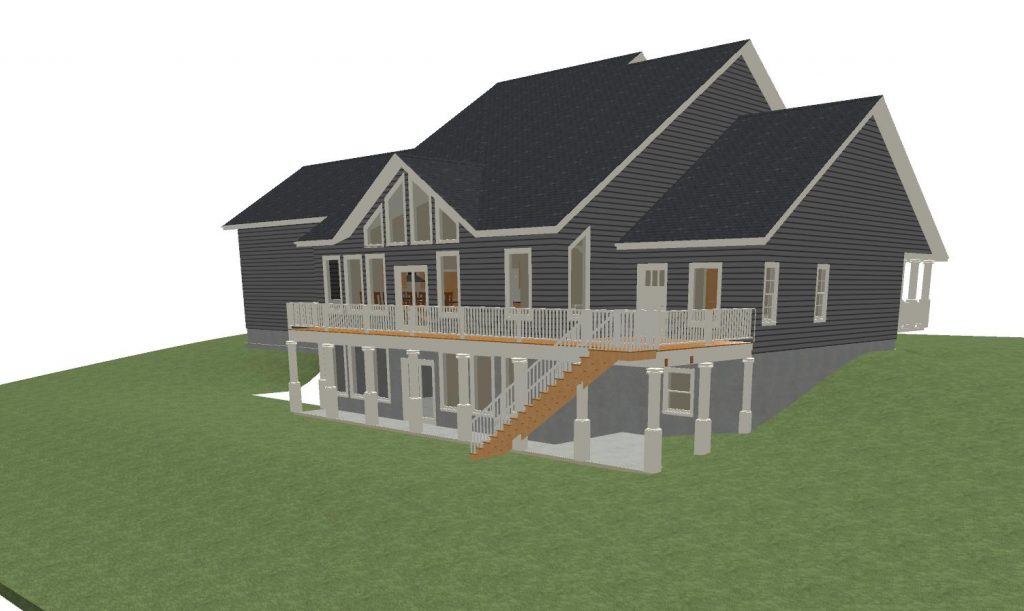 Cute, right?!  Trevor did a great job designing it and we had most of the things we wanted.  And so we took it back to our builder.  And then he came back with our estimate – over budget.  Like way over budget. {here’s where the “what if” comes in, because we actually ended up spending more on our current build than this one that we would have had built for us…. should we have gone with this one?? what we picked will be better for us in the long run, but still, it would have been a whole lot easier to have someone build it for us!}

So now what?  we’ve already jumped in to purchase the land, but we can’t fit the house we want to build in our budget.  So we tweaked that plan, over and over, trying to make it smaller, take out things, like the deck, etc.  But we couldn’t get it to hit in budget.

Trevor’s dad is an architect, and he helped with tweaks.  He then had a whole new house plan – and I actually really really liked it.  But then it turned out that one would cost even more than the first, of course! 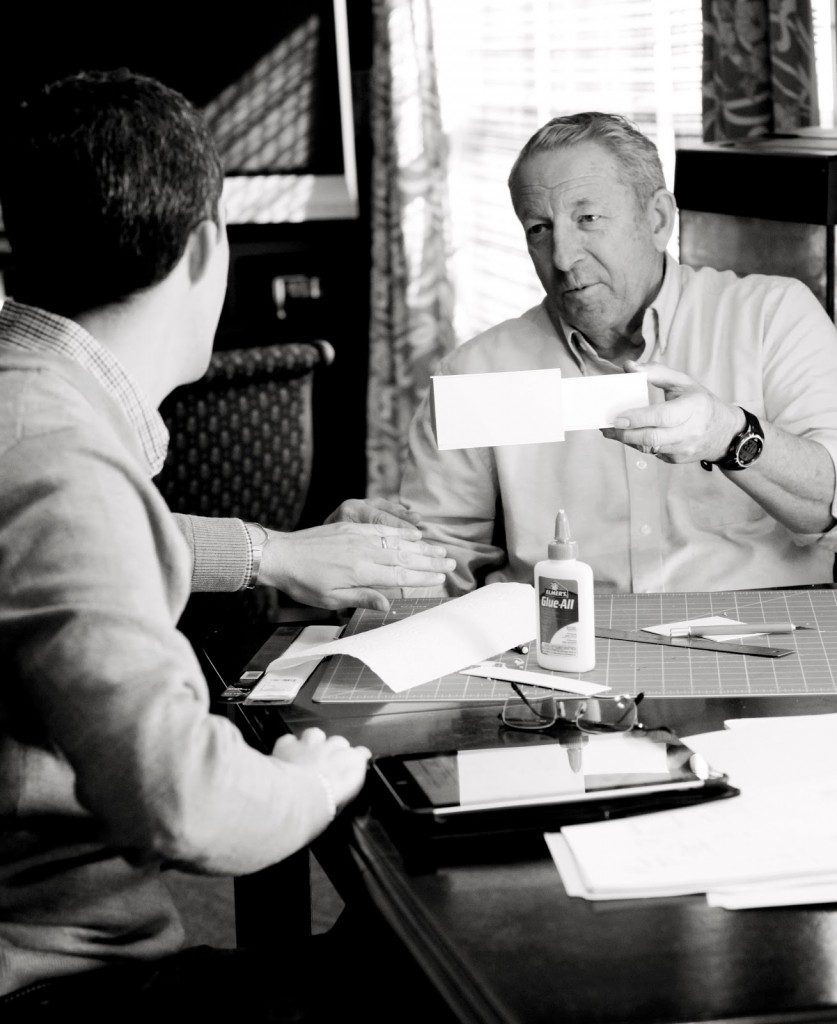 Somewhere in all this talk of how to make it work, we touched on the idea of building it ourselves.  So we thought that for a little bit.  Then we thought that was incredibly crazy and there would be no way.  No way.  So we met with the builder more.  We tried another house plan.  And another.  All trying to tweak the layouts we’d already been over for months and months.

Trevor’s dad was in town, and with roadblocks on everything else, he and Trevor started over.  Blank slate.  This time they were back to the idea of a self-build.  If we were going to build it ourselves, it would need to be a really simple structure.  So they started with a rectangle and filled it in from there.  We based the design from the starting point of this inspiration house:

It was the perfect mix of country and modern.  It had a nice low profile that would sit well on our land site.  And in addition to that – it was basically a rectangle, so easy to self-build.

After tons more planning, it started coming together.  There were no inside pictures of the inspiration house, but the center area is probably a vault.  We tweaked it so that we could fit the kids bedrooms up in that loft area.  Added a garage, etc.  And we cut back a little on the amount of windows – we really love all the windows in the inspiration house, but it turns out windows are really really pricey, so again, compromise is the name of the game when it comes to home building.

Things we got: kids rooms upstairs (they were adamant about not having a room in the basement, but at one point even this was on the chopping block), master on the main level, and ….. craft studio on the main level!!  That’s probably what sold me on this house plan, because I lost a sitting room that was going to double as a guest room, and having that was at one point on my non-negotiable list.  But turns out everything’s negotiable when a main level craft studio is at stake 🙂
It’s really hard to design a house for all phases of life – now, with all kiddos at home, then empty nest, then again a big gathering house where all the grandkids can come and visit.  That’s the biggest pressure – this is a forever house.  We want it to work for everything.  We even planned the main level to be all wheelchair accessible (wide doorways, etc).   Because it shares a driveway with my parents, so we’re for sure settling in for life.  We already have some regrets and what-ifs, which I’m sure I’ll cover in future house posts…
So here we are: house plan, check!  We got it approved through the bank and the county and so it’s good to go.  Next up – how are we actually going to build a house?!?