0 shares
I think you know I recently attended a craft blogger’s conference (yep, there are such a thing) called SNAP. I will tell you a little about it, but first, the ultimate dilemma was What to Wear!
I grabbed this new shirt the day before I left when I ran into JCPenney to get my son some new shoes.  It was on display and I couldn’t decide if it was cute or if I was delusional, but I posted it on FB and most people liked it, so I kept it.  I wore it like many of you suggested – no belt, dark pants.  I had some big giant yellow earrings on to pull in some color, but you can’t see them in the picture: 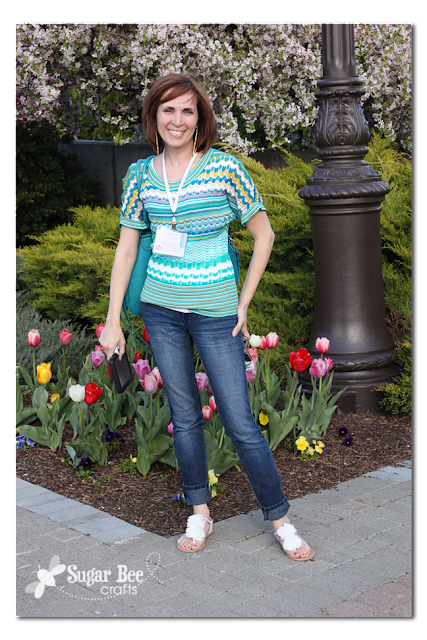 The next day I wore the same thing I wore to my segment on TV.  Every day I wore those flat sandals with the poofy flower things – they are cute in person.  Blame Kate for the blurry picture: 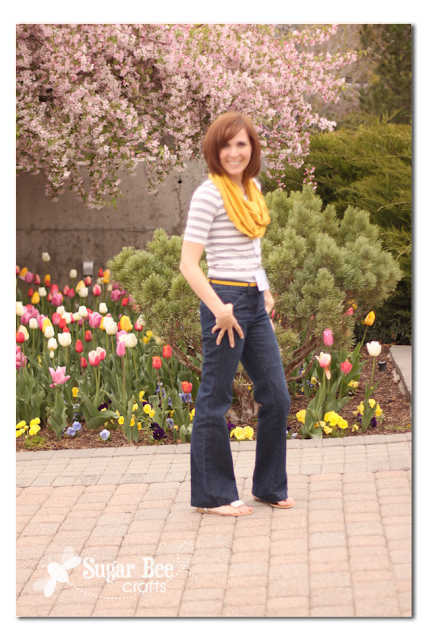 Mustard was the color those first two days – it seemed like everyone was wearing it.  Day 2 it even came down to it being Mustard and Gray stripes – seriously, this is a picture of 4 of the 6 people sitting at a table in one of my classes – we all had that theme (Kelli is wearing a yellow cardigan, but you can’t see it too well in the picture) 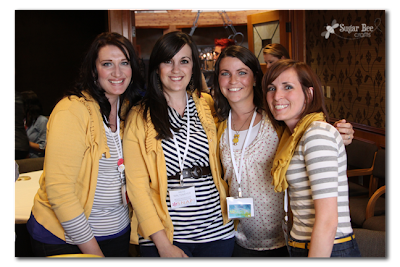 Day 3 I thought a ton of people were wearing Tangerine – maybe it’s because that’s what I was wearing so I noticed it more…I went with curly-ish hair that day: The final day was when we flew out, so I wore a maxi dress because it’s so comfy so I thought it’d be a good way to look nice for a plane ride but still be cozy.  I forgot to take a WIWW picture, but on our way to the airport we did some sight-seeing, so here’s this: 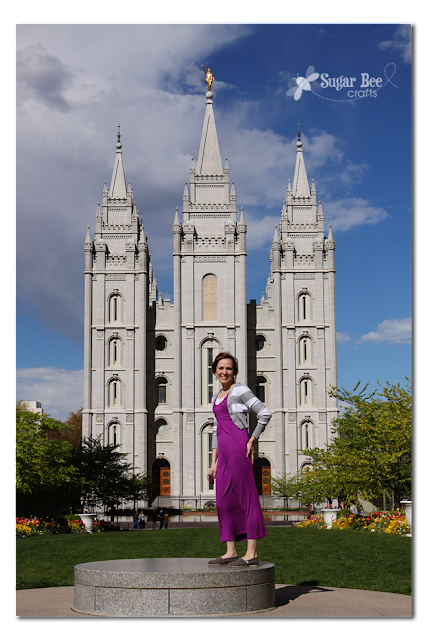 So I thought I’d write up some posts about SNAP – because I feel like I went for YOU, so I want to share what I learned in each class, etc, in case it is something you wanted to learn about too.  So maybe next week I’ll dedicated my afternoon posts to the classes I went to – I took notes knowing I’d share it all with you.

But a brief overview if you can’t wait til then:
–wowza, crafters are TALL!!  I am not kidding – I felt so short!!  I went with my cousin Kate, who is almost 6′ 1″  – – there were probably 10 gals her height or so, and they were all wearing big giant wedge shoes.  Crazy!
–You should pack light – I thought I did good to pack in just a carry-on.  Then I signed in to the conference and got a giant grocery bag full of swag and realized I’d have to fit in all in my carry-on for the plane ride back.  I rolled clothes into super-tight balls and somehow made it work for the ride home.
–I’m not outgoing.  I knew that going there, but it’s been confirmed.  I thought I did great talking to people and meeting people, etc, which was super fun.  But lots of bloggers seem to know each other and have groups of people they know, where I thought I just kind of floated around – which was fine.  I was glad I took Kate along with me.  But maybe she was my crutch and I would have found some sort of “group” if I was alone — who knows.
–I like blogging.  I like crafting.  It’s super fun to be surrounded by tons of people with the same interests.  Being the in midwest, not many craft bloggers are close, so I’d never had the fun of being around others before.
–Social Media is a big deal.  Everyone tweets and updates statuses and such during classes.  I guess it was my welcome-to-the-real-world.  I think I need to get a smart phone just so I can be a part of Instagram….
–I didn’t take too many pictures – weird, I know.  I would chat with bloggers, big and small blogs, and I just didn’t want to be all “now since we talked, can I get my picture with you??” and like I said earlier, I didn’t really hang out in groups of people too much, so no big group pictures of fun….  But I’ve already spotted myself in a few crowd pictures from other bloggers, so I’ll have to grab those and post them….
–Bloggers are awesome in real life.  Super nice and easy going.  Fun to be a part of it all.
–Business cards were a BIG deal – – good thing mine came in time!  I’ll probably do a whole post about them, because they’re awesome…