I’ve stenciled a lot recently – I’m a huge fan!  But I had only done walls (in several rooms) and boards.  When my Master Bathroom needed some pop of color via wall art, I thought a stencil would be perfect – so I attempted to stencil a canvas – – and here’s the tutorial, almost project fail, and how to win out in the end! 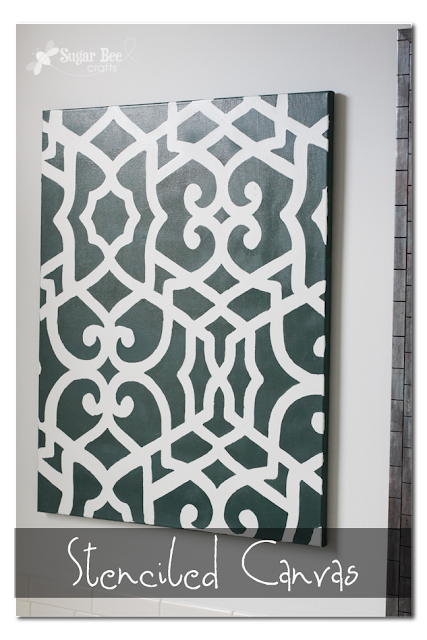 If you remember, my master bedroom has a focus stencil wall (um, I don’t think I even did a room reveal on that room!  guess I should get on that) 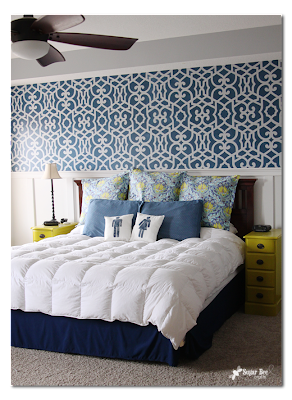 So I knew I wanted to incorporate that somehow into the bathroom.  I thought about stenciling the wall, but the hardest part about stenciling is wall edges and corners and ceilings – so I morphed my idea into a big piece of art, to avoid the trouble of wall edges.  And I was wondering how heavy a giant board would be, when I was wandering around Michael’s and their canvases were on sale half off – so I thought, canvas!!  Easy to hang, and a blank, well, canvas.

The strip of colored tile running along the tub and shower is a bluey sage-ish green, and I didn’t have a perfect match – so I grabbed a bunch of craft paint and mixed until I got the perfect color – I was pretty proud that I got it right 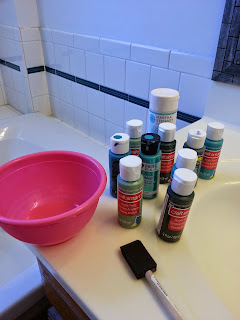 I centered the stencil on the canvas, then filled in the edges as I went. 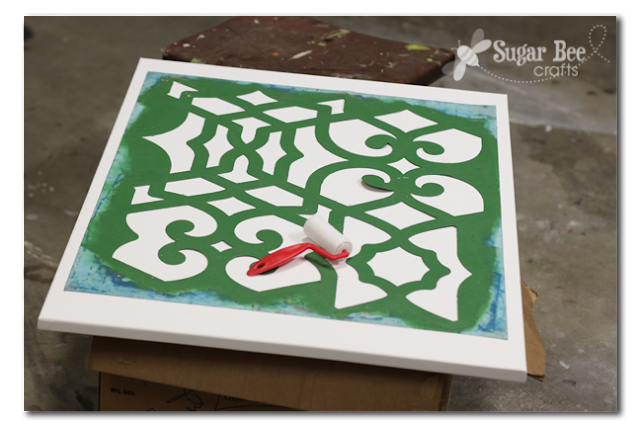 Okay, grab your stencil and your paint and a little roller and jump on in… 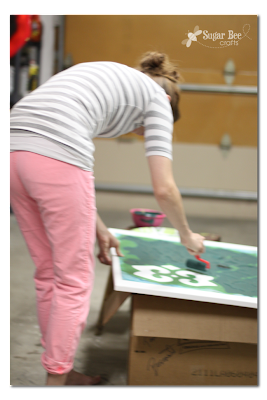 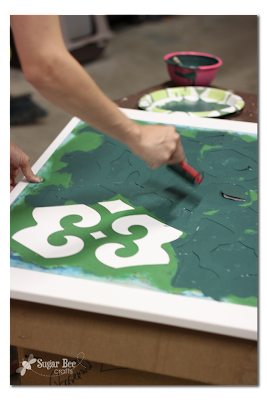 So, the first project fail is the bleeding issue.  A wall is stiff and you can push your stencil right on it, etc.  A canvas has give – so when you’re rolling on top of the stencil, it pushed down and you don’t have a good seal between the stencil and the surface.  Hence you get this: 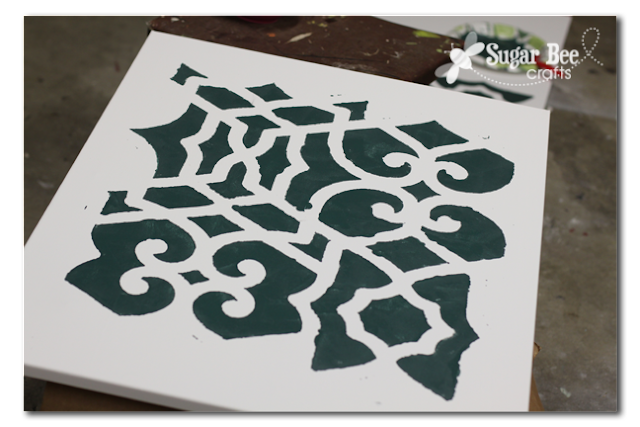 But, it’s not a super huge area, so I thought I’d just go back and fix it by hand.  Which I’ve done.  On the wall.  When I used wall paint.  But remember – here I used craft paint – fail number 2 because it really bleeds in color.  I painted 2 coats of white and realized that no matter how many coats of white, that green would seep through because it was craft paint. 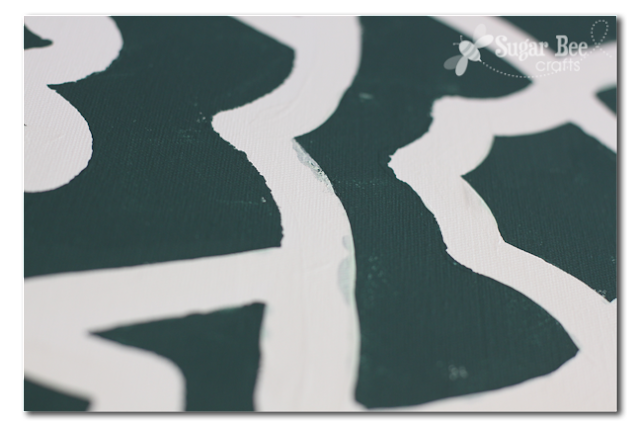 SO, I needed to seal that craft paint.  I sprayed the whole canvas in a clear sealer: 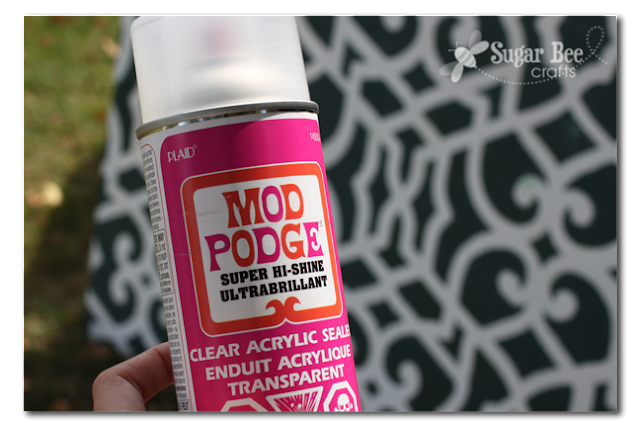 Which worked!  But then when I did my touch-up layer, the sheen was different, so chalk that up to fail number 3.  You can kind of see it in this picture: But that was an easy fix – I just sprayed a second coat of clear over the canvas.  Done and Done! 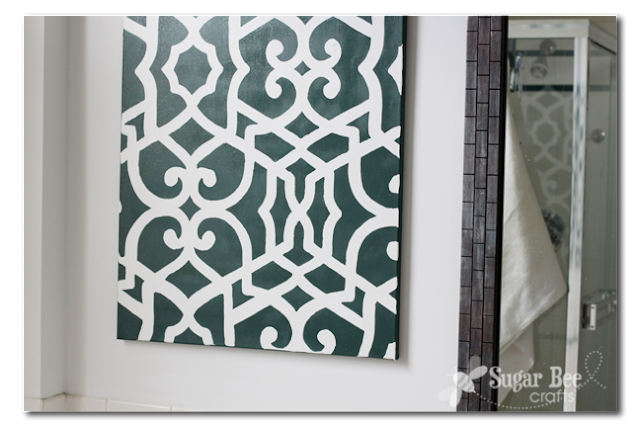 I hung one up vertical over the bathtub and one on the other side of the room, horizontal.  They’re pretty big and give the room a nice touch of color, without making a huge commitment like painting a giant vaulted wall. 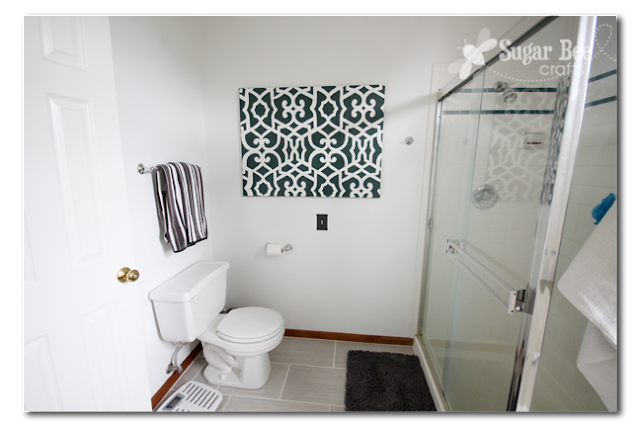 Have you ever tried to stencil on a canvas??  Do you have any tips to make it go a little smoother next time?  My first tip would be not to use craft paint… 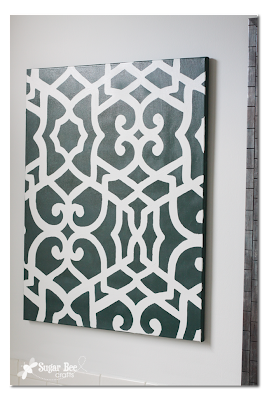