Each week I do a photo post, but it’s your lucky day because this post will come with the whole story – cause I can’t not write it!  So last weekend Trevor and I ran the Warrior Dash.  Let me reiterate that I am not athletic.  Or a runner. I don’t know why I sign up for these things! (You can read the story of when I did a triathlon HERE).

So about a week and a half before the race, I realized it was coming up ( I had looked through the previous race pictures online and thought I was way over my head and not rowdy enough) and tried to get out of it.  You know, what was I thinking signing up for it in the first place.  But of course the deadline to transfer registration is 2 weeks, and that had passed.  So I made myself do it because otherwise it would have been a wasted ticket.

So the week of the run, after knowing I couldn’t get out of it, I thought I should train.  I ran 2 times that week.  I could run a mile without stopping, and I thought that was pretty good.  I was just aiming not to be last at the Warrior Dash and I figured I could just go around any of the obstacles that looked too hard.

When we got there, everyone looked intense.  Buff people.  Lots of muscles, etc.  I was out of my league!!  I kept trying to spot someone I could beat so I wouldn’t be last, but I couldn’t pick anyone out that looked wimpier than me.

A couple of before and after shots: 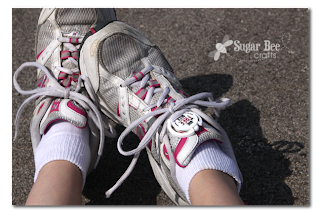 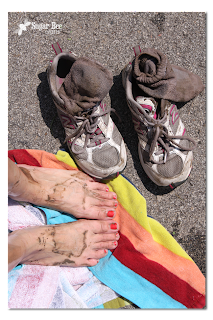 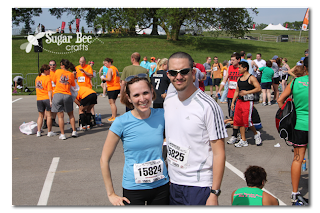 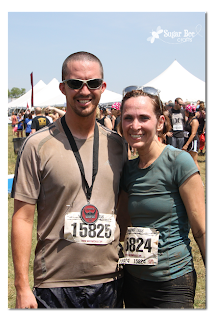 So yeah, I did it.  And who knew – it was actually fun!!  When I did that triathlon I thought “never again” but right after running this I said “I would for sure do this again – it was fun!” which is an odd thing for non-athletic me to say.  (Random fact – I was picked as Athlete of the Year in 6th grade – everyone was in shock – might have been a mistake…)

So here I am (in blue on the edge) heading under the start gate:

And running out of the gate: 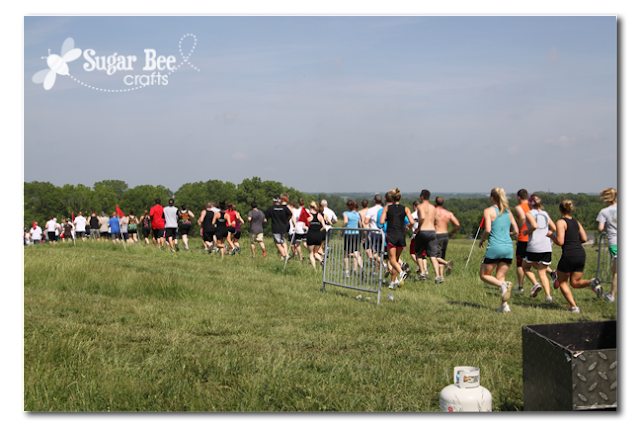 Do you see that giant crowd of people – it was a big pack – which I was super grateful for.  Trevor sped ahead to get in front of the pack.  I liked staying in the thick of things.  We would run and then come up on an obstacle.  But with a big pack of people the line would back up.  So you’d wait several minutes before getting up to your turn to do the obstacle.  So essentially, the entire race I would run about 1/4 or 1/2 a mile, then stand around and catch my breath, climb through something, then repeat.  Now that’s my kind of race!

My regret is not doing it with more people I know (my brother was there too but again, he was much faster than me) because then I would have taken a disposable camera to catch action shots at all the obstacles along the course.  We did get a few pictures at the last obstacles that can be seen by the crowd (my sis-in-law had my camera)

No one told me to pose for the fire – – all the guys (3 in our group) had fun fire jumping shots – see, here’s Trevor: 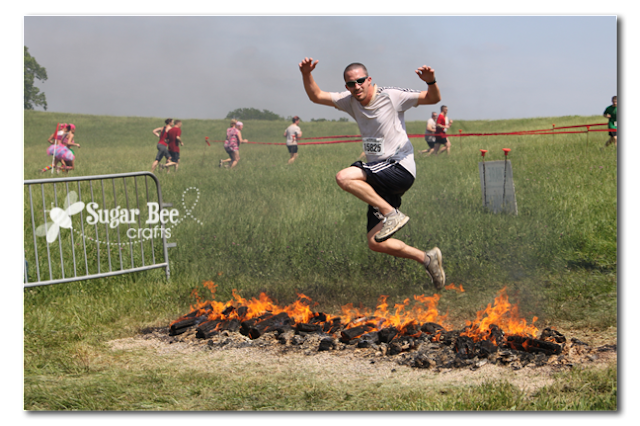 Now, maybe I didn’t take this very seriously – this posing-while-running shot kind of gives that away: 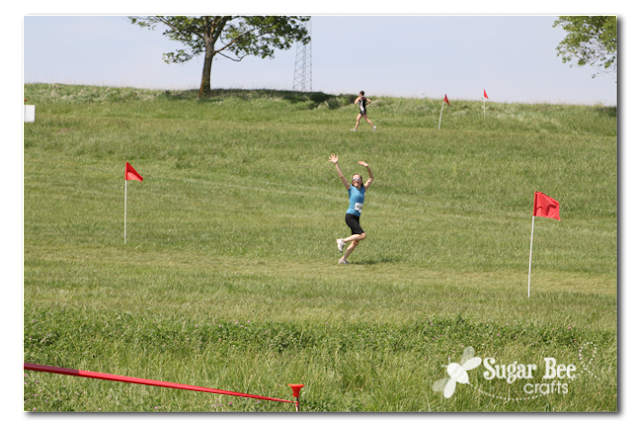 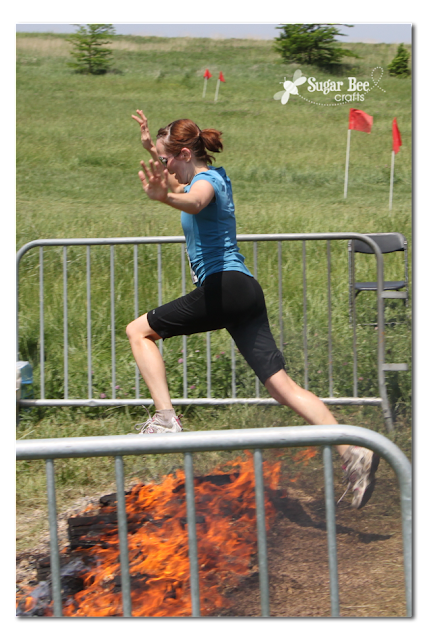 Making my way through the mud pit – which was more like a muddy water-filled ditch: 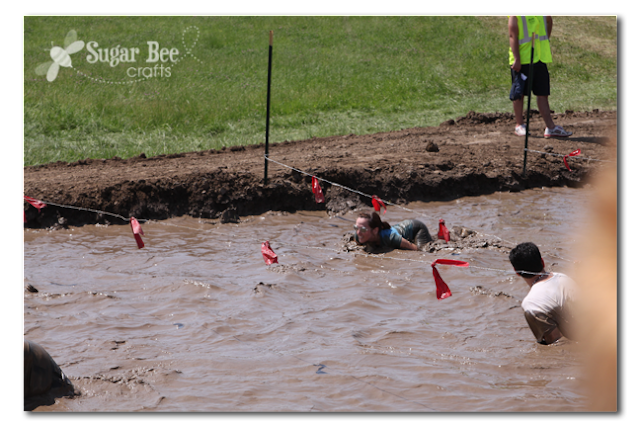 At every obstacle it was slick, etc, because several involved mud or water.  I was careful and made it through everything without falling.  Until the end when Trevor was there taking pictures.  I climbed out of the mud pit and was looking up to find him (he had moved into a different spot to catch me coming across the line) and I wasn’t watching my feet and I biffed it – that’s why my legs and arms are covered in mud.  Here the announcer is heckling me about the fall in front of the crowd: 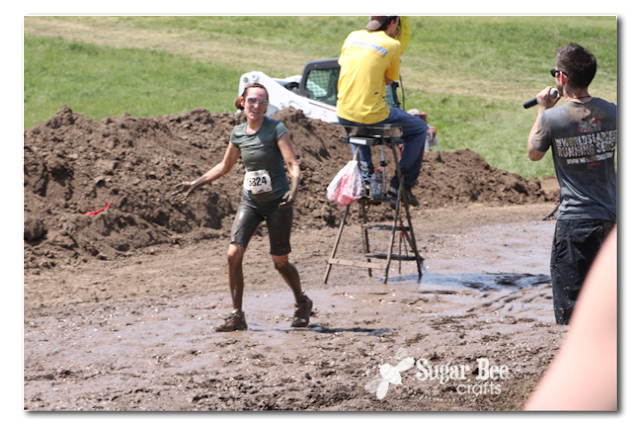 So at that point I thought the race was over until Trevor had to yell “keep running, that’s not the end” – oops – the end was a few more meters ahead.  So here ya go – now I’m crossing the finish mat: 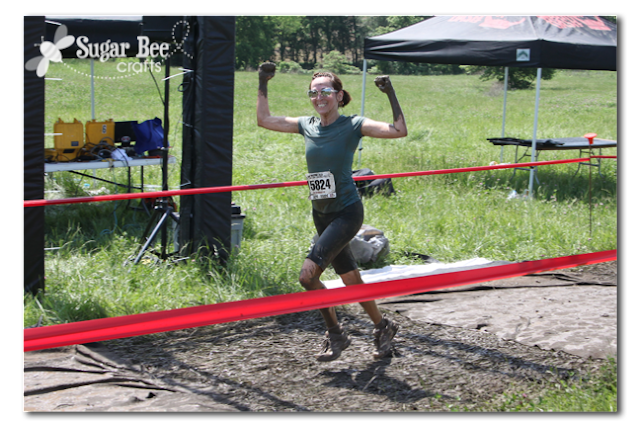 It was fun, and I really impressed myself with my middle-of-the-road performance.  Going into it I thought I’d be in about the bottom 10%, but in my age bracket for women I placed around 400 out of 800 – – not bad!!  That was great for me!

Finished!!  It took me a little under an hour.  About 30 minutes longer than Trevor. 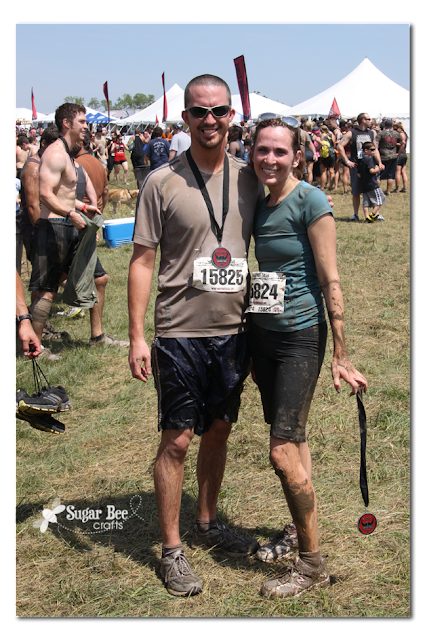 Afterwards you can clean up by getting sprayed by a giant hose – picture a firetruck hose.  And it was FREEZING.  But I was covered in mud and we had driven Trevor’s nice car, so a rinse-off was a must. 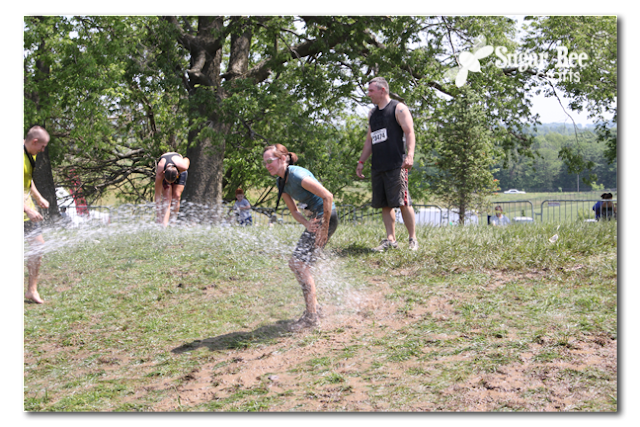 Free snacks at the end (and beer, but that was irrelevant to me).  The giant turkey legs smelled good, but I wasn’t too hungry after a long run in the heat. 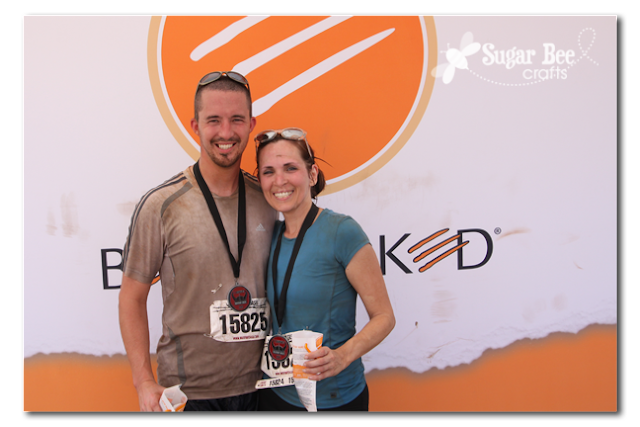 Giant pile of donated shoes – begging to have its picture taken: 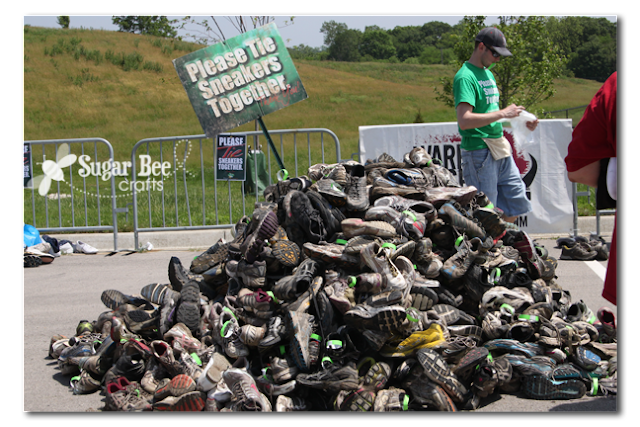 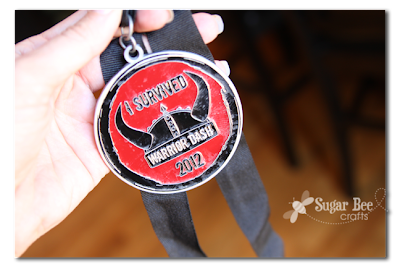 as one of my friends put it “doesn’t it just make you feel so hard core” – yep, that’s me!