I’ve been hard at work this week, transforming some furniture… 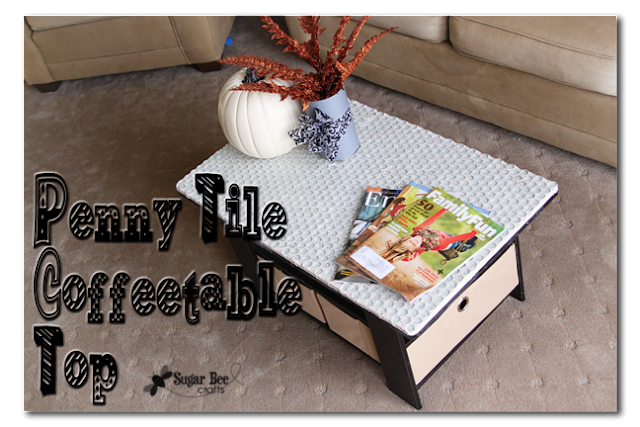 I was sent the Coffee Table from Wayfair.com (check them out – they have EVERYTHING!) with the challenge to give it a DIY spin.  I was also sent a gift card from GiftCards.com to cover supplies cost – and look, it had my blog name on it – fabulous! 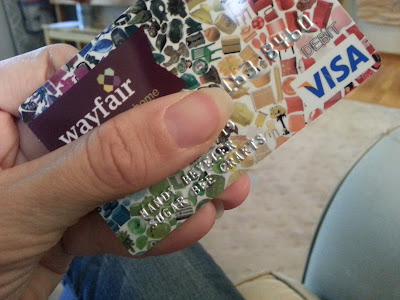 Anyways, first I had to put the table together – and I’m happy to say it was easy to do.  I was able to do it myself, WITH the help of my 3 year old (which we all know adds a level of difficulty to the project).  Putting the pieces in piles to help identify everything: 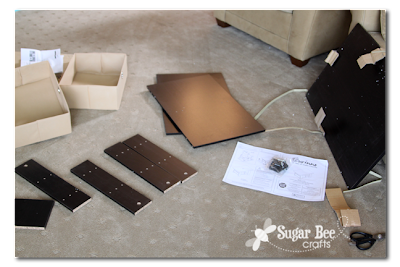 And attaching it all together – – I told him to get a picture of me putting the table together – this is what I got: 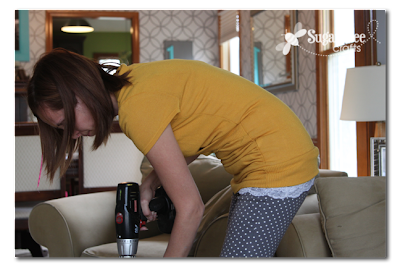 So I redirected him to get me AND the table.  Well, it was a good attempt: 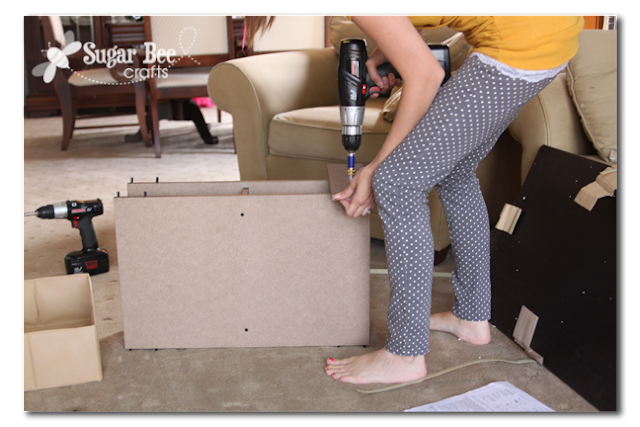 And then one of him hard at work: 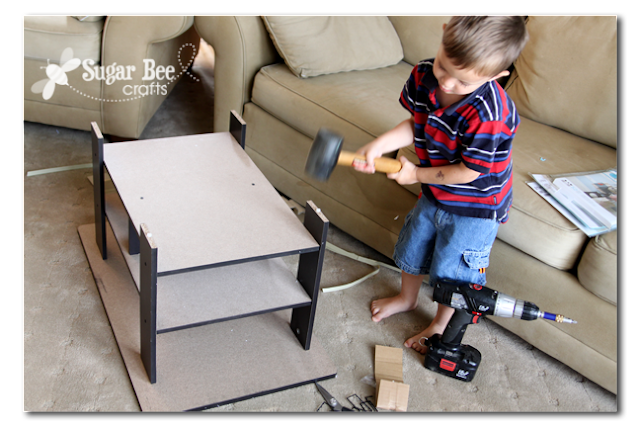 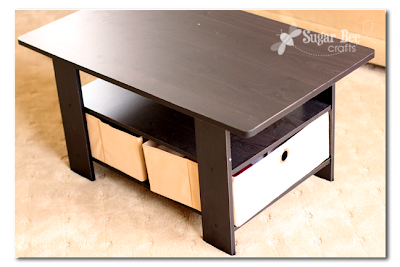 Now for the revamp.  My first thought was “STENCIL THE TOP” because that’s what all of us would do.  But then I thought that was too predicated so I need to go a different direction.  I settled on the idea of tiling the top and headed to buy some mosaic tiles (like in my Large Tile Trivet) – – and that’s when I spotted penny tile for super super cheap – I was so excited I grabbed it instead and headed home. 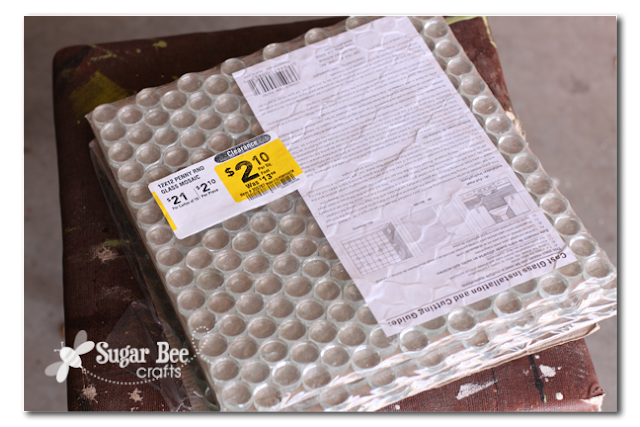 Well, on the way home I realized I had just gotten myself into this deeper than I thought.  With mosaic tile, I was planning on using the sticky Bondera sheet things and sticking the tile down, like I did on the trivets.  BUT, these penny tiles were glass, which means see through, which means I couldn’t use the sticky sheets because they have mesh lines running through them and you’d see that – curses.  So I actually had to use mortar to attach the tiles – here’s that: 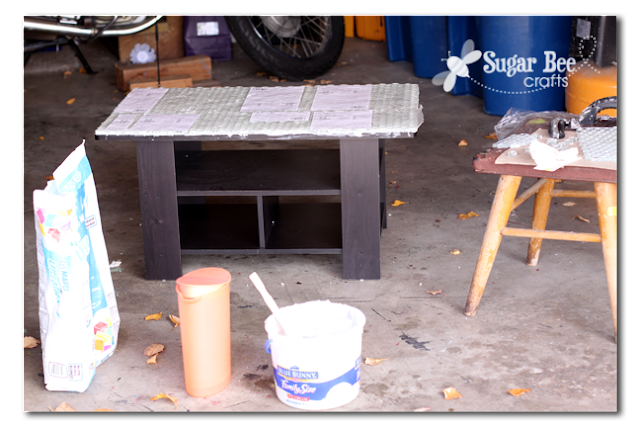 And after that dried a day I grouted over the top.  It’s not perfect….  I didn’t get enough mortar in two spots so you can see the table through the clear tile… 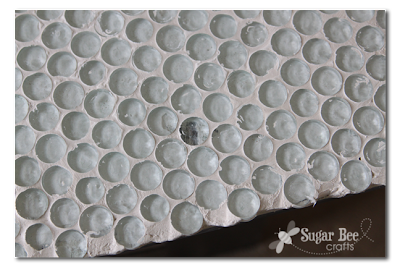 And then after I grouted I realized there was one section that I had left the clear plastic coating on – so I had grouted OVER the wrapper – oops.  I could fix it, but for now there’s just no grout in that part: 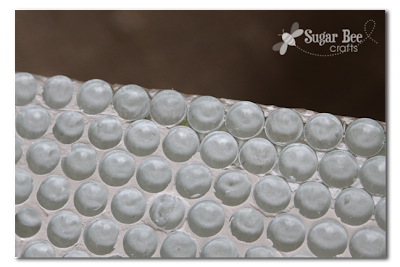 But other than that, it’s looking pretty good!  Penny tile isn’t uniform and has lots of divots in the surface, but still way cool.  And at clearance prices the whole top cost around $10. 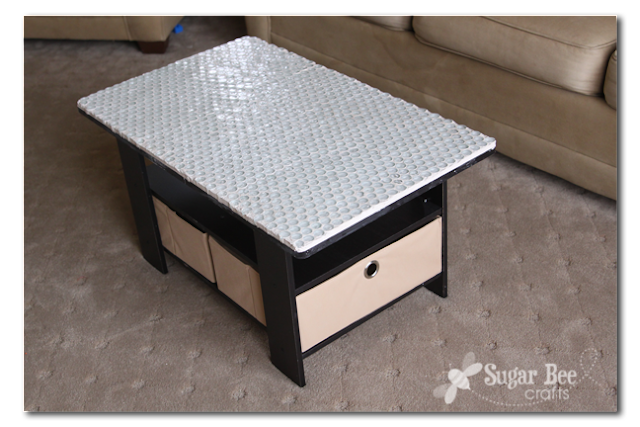 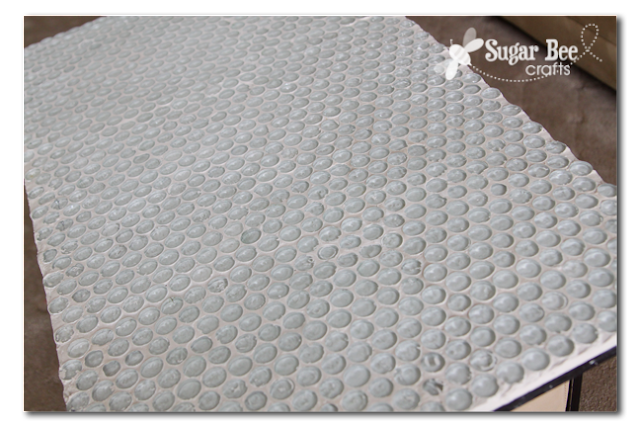 I love how it’s just a little unexpected – gives depth to the ordinary coffee table: 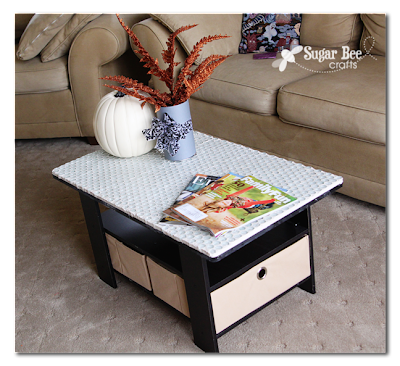 I even tried to “stage” it for you: 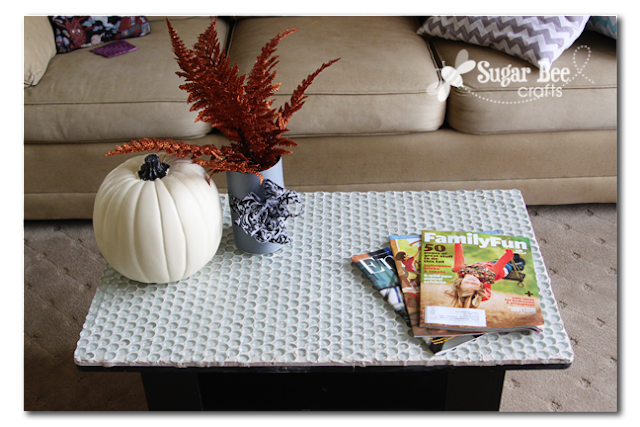 Have you ever attempted tiling?  Have you ever bought a boxed piece of furniture and then revamped it??  You should!