Home » all misc » Paint it Black

Well, Mandy asked me to do a guest post and of course I had to oblige, mainly because my spray paint project is much cuter than her spray paint craft. I also considered titling this post…

How to Paint Your Car with Removable Paint
or

You might know that in addition to being an engineer and a blogger, I also love cars and buy and sell them regularly. About a month ago I bought a Mini Cooper S sight unseen. I knew it was yellow, but I didn’t know it had white wheels and needed a big vinyl flower on the door. It wasn’t drawing too much interest as is, so I decided to man it up a bit. 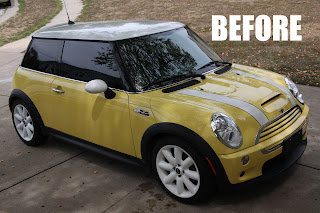 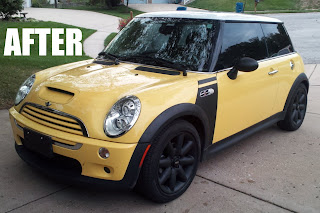 I painted the wheels and mirrors black and added a black stripe to each fender. Now, I was a little hesitant about painting, because what if the new owner ended up like the white after all? So I used a paint called PlastiDip. It’s a spray paint that you spray on and it forms into a tough, plastic layer that you can peel off later if you’d like with no damage to the surface underneath. Look it up on YouTube if you’re interested. I went with the flat black, because flat black is like tangerine tango for guys, but you can buy all sorts of colors. I’m thinking this product has some merit in the crafting world, but I’ll let you gals figure that one out.

It was a pretty simple process. First, put the car up on stands and take off all the wheels. If you don’t have four jack stands, borrow some from your neighbor or use a sewing machine at each wheel (the steel frames in them are really strong). 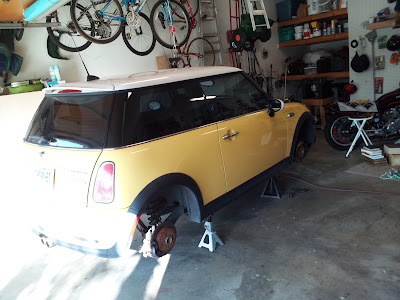 Then, clean the wheels. You’ll need to really scrub them and get them clean and dry. I towel dried them and then put them in the sun for about 30 minutes. 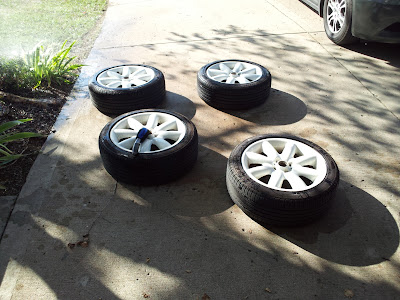 After that I stopped taking pictures, because it’s funner to do the project than to document it. You think I’d know better after being married to Mandy for so long. At this point, I figure I’m talking to a few, hardy souls, or maybe even husbands, as most crafters would check out after seen a car up on stands.

The wheels are easy to paint. I placed them on a piece of newspaper each to protect the cement. You might want to place them in the front lawn instead, which is what Mandy does when spray painting. It leaves nice mini crop circles in the grass for the neighbors to wonder about.

Then I painted the back of the wheels. The first coat should be a light mist. It won’t cover very well but that’s OK. I waited about 20-30 minutes between coats, or until it was dry to the touch. I did 4 coats on the back, which I really wasn’t too worried about, since it’s the back of the wheel and all.

Then I flipped them over and did the front. Again, I did a lot of coats and waited for them to dry in between. Make sure to get all of the sides and angles of the wheels for complete coverage. I ended up doing about 6 coats on the front, which was probably overkill, but I figured the more the merrier. 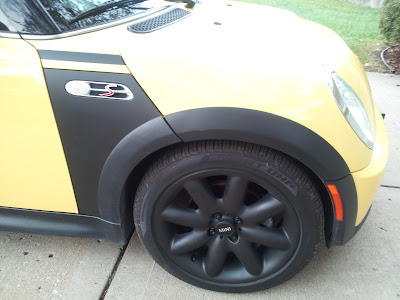 For the mirrors and side fender stripes, I masked off around the car with tape and newspaper. The mirrors took about 4 coats, as did the stripe. When masking, try to use the body lines that separate the body pieces as your friend. It’s important to note that if you mask on a flat surface, the PlastiDip will form a continuous layer over what you’re trying to paint and the tape. When you peel the tape off, the PlastiDip will come with it. For the lower part of my stripe, it wasn’t a big problem since there were body lines that separated that part of the fender from the rest of the car. The upper small stripe was more difficult because it was just a masked stripe. I ended up carefully (as to not scratch the paint) scoring the stripe with a new, sharp razor blade before peeling up the masking tape and it worked great. 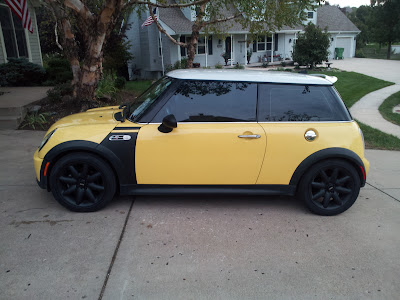 So here’s another shot of the after. It’s a great product and I think it’s much manlier now. Whether or not it helps the car sell is another question.