Home » Blog Tips » become what you want to become

truth:   “We cannot become what we want to be by remaining what we are.”  – – mull that over a little, it’s worth the thought time.  So yeah, what are you trying to become?  a little bit better, a little more awesome – so you need a little change.  That’s where the dreaded goals come in – some people don’t love hearing about or planning for Goals, but it’s time to get over that.  On the other hand, some people love goals – good for you!  Either way, they’re a must. 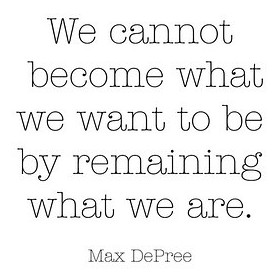 Last week I spoke in our church congregation on the topic of Setting Goals in Faith.  As always, I feel like in preparing for a talk I gained tons of insight for myself.  So I thought I’d share a few things with you – since I have goals on the brain lately.

Did you know:    “Only about three percent of people have written down goals for their lives.  Most studies tell us that the three percent with written goals achieve more than the other ninety-seven percent combined.”  Writing down goals is HUGE — so my challenge to you is to Write Some Down.  Today.  Just do it! 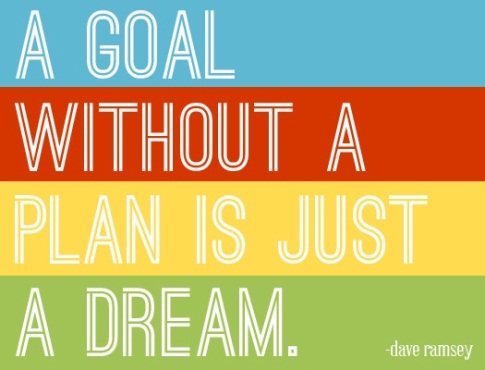 So you know that you should write them down, but what should your goals be?

Before you set individual goals, we should pray and meditate. We should ask Heavenly Father to help us know where we are weak, what we need to improve, and what our goals should be.  You can break it down into four categories:  spiritual, mental, physical, and social.  In addition to setting our individual goals, we should talk with our families and set goals for the entire family to achieve.

Remember, it doesn’t have to be some giant goal.  I like to consider my daily to-do list a goal list.  It can be simple things like that.  You can also set a goal for the week, or a goal for the month.  I think goals for the year can get too lofty and intimidating, so break it down.

Have you heard of SMART goals??  It’s a good way to gauge your goals…

S- SPECIFIC, clear, know exactly what’s expected – answer  Who What Where When Why.  A specific goal has a much greater chance of being accomplished than a general goal.

M- Measureable –  concrete criteria, so you know when you’re making progress.  How Much? How Many? How will I know it’s accomplished?

A – Attainable – Not out of reach or below standard performance (those would be meaningless).  When you identify goals that are most important to you, you begin to figure out ways you can make them come true. You develop the attitudes, abilities, skills, and financial capacity to reach them. You begin seeing previously overlooked opportunities to bring yourself closer to the achievement of your goals.

R – REALISTIC – to be realistic, it must be something you are both willing and able to work for.  A goal can be both high and realistic. (that’s a hard concept, but it’s true!)

T-Timebound – grounded within a timeframe.  “someday” has no sense of urgency.  When you anchor your goal with a timeframe, you’ve set your unconscious mind into motion to work on the goal.

Elder Marvin J. Ashton, said: “The direction in which we are moving is more important than where we are at the moment. Goal setting should cause us to stretch as we make our way”

Remember that setting goals is a lifelong process—one that’s done most effectively when we focus on increasing our own personal best one step at a time.   We are gauging ourselves against ourselves, not others.  I really love this story I found:

Michael Edwards was the first person in history to represent Great Britain as an Olympic ski jumper. He was taller and heavier than his competitors (a disadvantage in ski jumping). He had such bad eyesight that he needed to wear thick glasses while jumping—glasses that fogged up at high altitude. He was entirely self-funded and as a result used mostly borrowed ski gear as opposed to the top-notch equipment provided to other skiers by their sponsors.

The odds were stacked against him. And yet, during the 1988 Winter Olympics in Calgary, Alberta, Canada, Michael Edwards had a perpetual smile on his face. He was already achieving the goal he’d had for many years: to compete as an Olympic athlete. He didn’t care when people told him he’d never win. He didn’t mind that other competitors would be better than him. And he never expected to take home the gold. His goal was to make it to the Olympics, and that’s just what he did.

He had wanted to inspire people, and inspire them he did. The crowds quickly started cheering him on. They loved rooting for a guy who did his very best and chased his goals, even though Michael’s prospects of winning seemed slim to none. As the games continued and he indeed placed last in every event, his popularity only grew. Nicknamed “Eddie the Eagle,” Michael Edwards had people across the globe rooting for him.

His Olympic story shows that there’s a lot to be said for setting goals, doing your personal best, and not worrying so much about those around you.