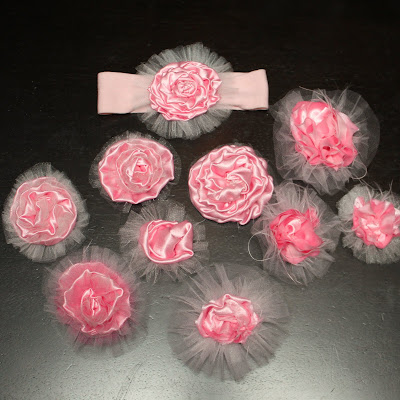 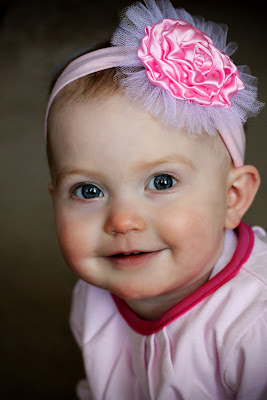 As I posted a week or two ago, I was attempting fabric flowers. Well, I’ve been working with more and tried several different methods until I stumbled upon a revelation: GATHERING! With some gathering, previously lifeless flowers gain the “umph” factor they need. I put together a quick little tutorial for those who like the visuals. I know you’re probably tired of the pink satin and tulle (me too!!) but I’m using up my scraps. Plus they’ll match the skirts I made (that you could win!). Here we go (but first take a minute to admire my little model – what a cutie!): 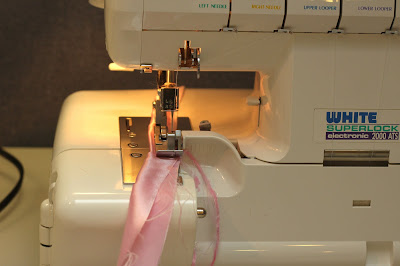 Next, along your serge/zigzag, baste (that means sew with a wide stitch). If you’d like tulle wound into the flower, put it on top of your material and then baste. I found that if the tulle was gathered before adding it, it had a lot more body. 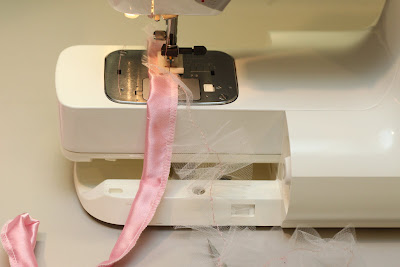 Be sure to leave tails of thread. Pull on one and gather your strip. Below half is gathered and half isn’t – see the difference and the “umph” that gathering will give. At this point, if using tulle, it should look like a bad garter purchased at a discount store. On to the hand sewing. 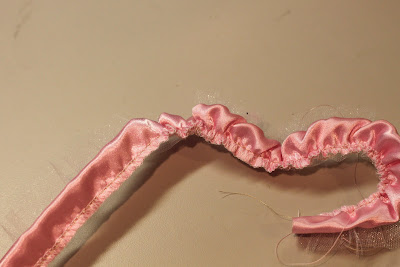 Wind your strip around and around. Just hold the serged/zigzag edge – use pins if you need to. Sometime’s this step is easier if you hold the flower upsidedown. Don’t worry about poofing – the gather should give that effect for you. 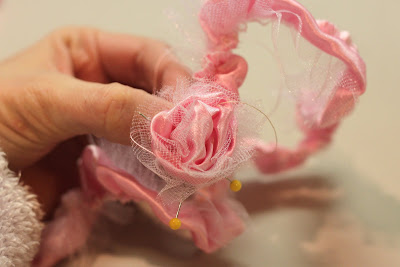 Final step, get your needle and thread (it’s very helpful to have it threaded and ready to go before you begin – instead I tried to thread mine with one hand while precariously holding a flower wrapped just so with the other hand). There’s no right way – just hand sew the back a bunch to hold the flower together. 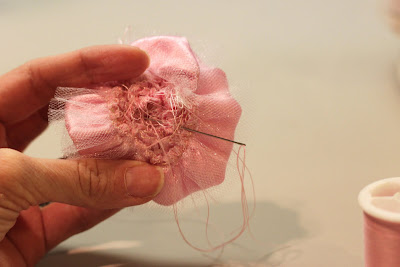 And that’s it – here you go. You can attach it to a baby headband or hairclip or just stick a bobby pin through it and pin it in. 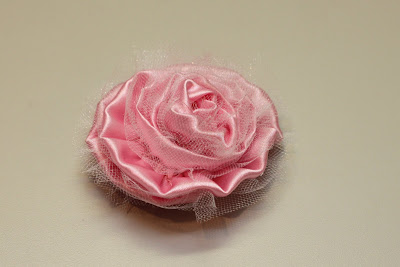 I started experimenting with different styles. I made one without tulle wrapped inside and added a tulle edge at the end instead (like my little model is sporting on her headband). Then I made some “shabby chic”, leaving a raw edge. Here’s a quick how-to on the raw edge with a tulle border – same basic idea as above, but don’t fold your strip of material. Then stitch your baste (sew with a long stitch) without adding tulle. 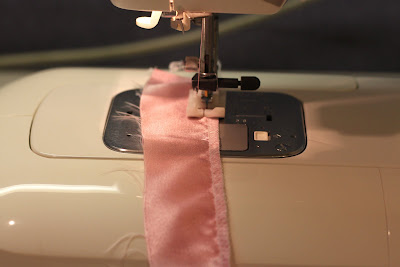 Pull your tails and gather so it looks like this: 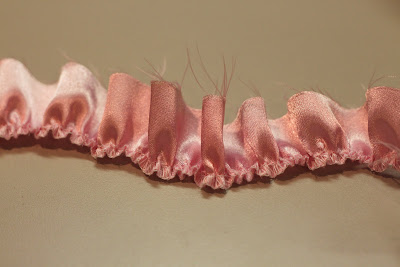 Then wrap around and sew the bottom as show above. After that is done, take some pre-gathered tulle and hand-stitch it around the underneath edge. 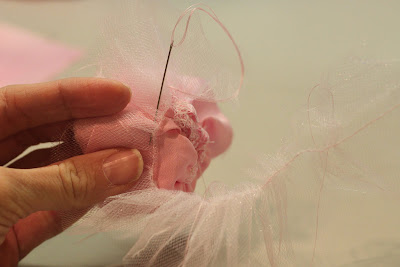 And that’s it. Here’s another look at the variety (3 shabby chic on the right-ish) – but don’t try to replicate any of these – it’s too hard. I tried to replicate the ones I really liked, but I could never make the same one twice. They all came out different. I guess that’s the fun of it. Anyways, go try making one!! You can do it right now, while I head off to a manicure……(those up close pictures of my hands – yikes!)

And don’t forget, I’m giving away a Pink Fluff skirt – scroll down a couple of posts to enter!! (ends Wednesday evening – hope to ship it in time for Valentine’s Day)