Many of you have probably already made Cake Pops by Bakerella, but stay tuned to find out the yummy recipe we discovered. I’ve made them before but apparently didn’t blog about it, because I can’t find it in my archives. Anyways, we did this as an activity for our playgroup – fun times!

First you bake a cake. Then just take your baked cake, crumb it up with a fork, and add a can of frosting. (Ignore the giant cake pices in the picture – we forgot to crumb it up until after we added the frosting – oops). Stir it up until the frosting is all over the crumbs. 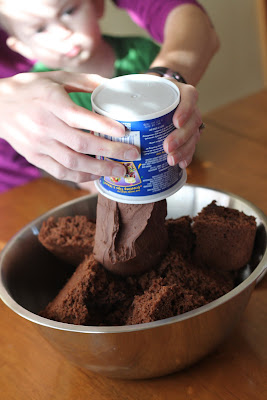 Next you roll the cake mixture into balls. We got creative and pressed some of the balls into heart shapes (heart ice trays picked up at the Dollar Section in Target) but it’s easier to just to balls. 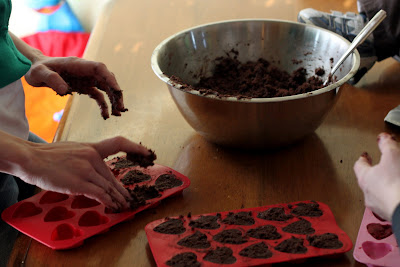 Did you see my little helper’s shoe in that last picture? Yes, he had climbed onto the table and was munching the remains of cake goo. 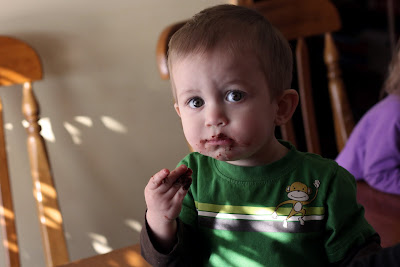 Anyways, on with the story. Stick the trays in the freezer. If you rolled balls, just put them on a cookie sheet and stick that in the freezer (or if it’s still Bitter Cold in your corner of the world like ours, you can just stick everything outside like we did) – leave for about 30 minutes. Next melt some Candy Melts – you can buy these at Michaels with your 40% off coupon. Try 30 seconds in the microwave, stir, and another 30 seconds. Repeat until almost melted (with a few chunks left – then just stir and heat will melt the chunks). Don’t over-cook the candy melts (don’t ask how we know….). I have no pictures of melting or dipping – I guess we were concentrating too hard on the process. But you just drop the ball/heart into the melted melts, swirl around until coated, lift out with a fork and give a couple of “taps” to get off the extra coating, and set somewhere to dry. You can cover them with sprinkles if you want. Or shove a sucker stick in before you dip them. There’s lots of possiblities – check Bakerella – it’s unreal!! Here’s ours: 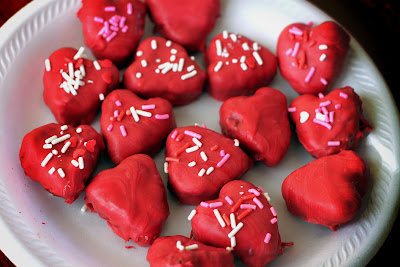 Not quite as cute or perfect as Bakerella, but we thought they looked fun enough. Also, I’m not the biggest fan of how cake pops actually taste – the candy melt is bland and the cake is so rich. I felt that again with the chocolate ones we made. But we also made a batch with a FRENCH VANILLA CAKE and STRAWBERRY FROSTING combo – it was DE-LI-COUS!! I’d highly recommend that combination!!! And it made the insides pink – an added bonus. So go make some!!