I was in search of an easy applique flower tutorial, but didn’t come across one so I thought I’d make my own… 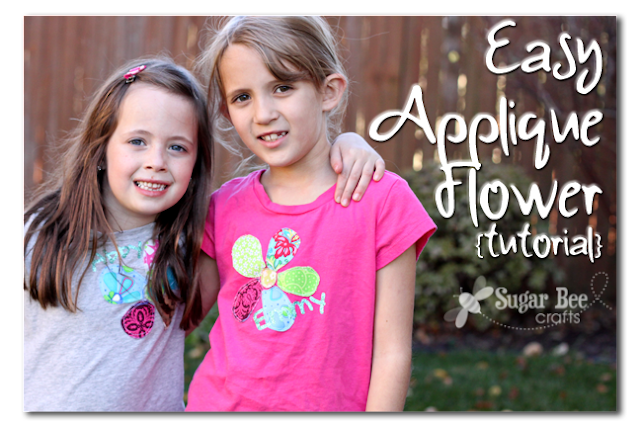 My oldest daughter wanted a “Craft Party” for her birthday.  I wasn’t quite sure what we’d be crafting until I saw tshirts on clearance for $2 and snatched up a stack.  Every girl loves to make herself a tshirt.  The trouble is balancing kid crafting with cuteness, so I thought an applique would be the perfect way to let them express their creativity but still be cuter than a glob of puff paint.

I wish I would have thought to take a picture of them all in their shirts at the party – oh well!

I have a tutorial to walk you through an easy way to do applique – easy enough for 8 year olds.  It’s the same method I used when we crafted Onesies at the Baby Shower a few months ago.

First you’ll need some Wonder Under/Heat n Bond/Steam A Seam – – you buy it near the “notions” section, and it’s in a package.  It’s a sheet of double-sided stabilizer that you will iron onto the back of your fabric (bumpy side does on the fabric).

Trace your shape onto the Wonder Under just using a regular pen and then cut it out.  I had drawn a template so the girls could put the template underneath and see the lines to trace.  Then cut out all the pieces: 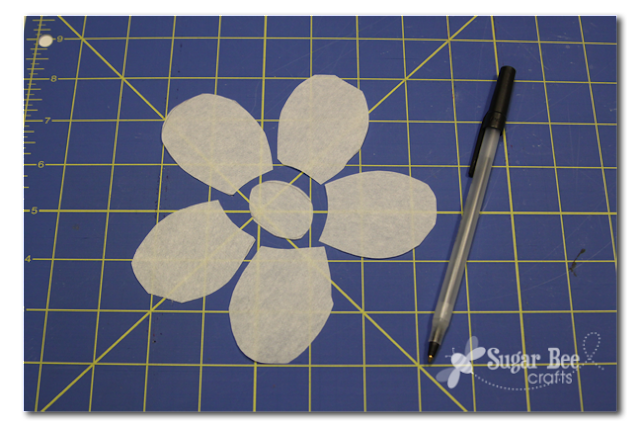 Next I had them choose the fabrics they wanted to use.  They were to cut small squares of each fabric for each petal.  Then they brought it to me and I ironed the Wonder Under (bumpy side down against the fabric) onto the back side of the fabric.  Here is it ironed down and stuck to the fabric square: 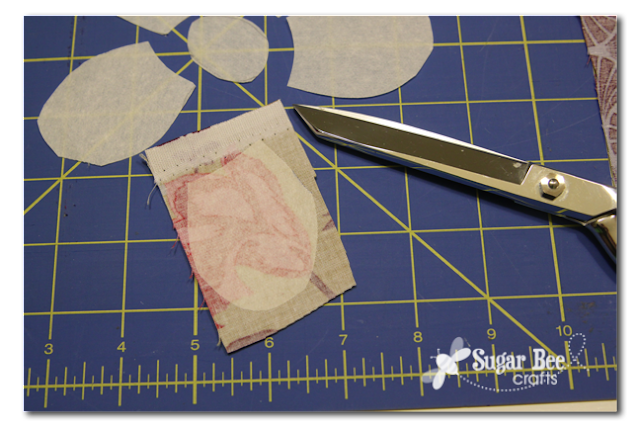 Then they again had to cut around their shape.  It didn’t have to be perfect.  After that peel the backing off of the Wonder Under – it will leave the glue residue behind on the fabric: 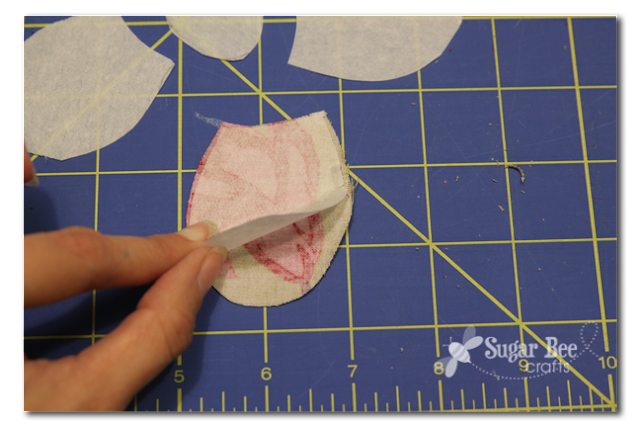 Take all the pieces and position them on the shirt.  Some girls put the flower up high – some down low on the side.  Wherever you’d like it to go.  Then iron it into place: 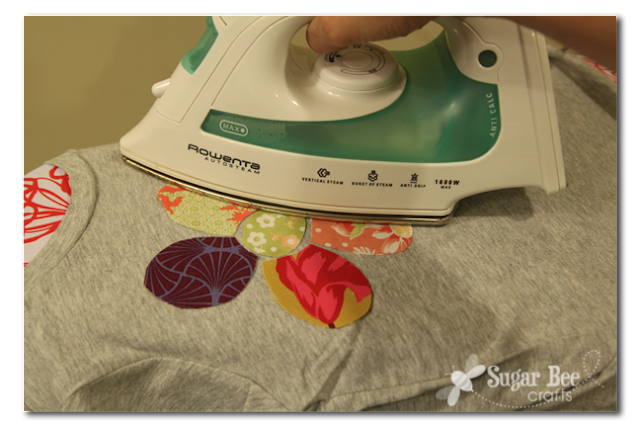 The glue reside adheres the fabric to the shirt.  You could stop at this point.  I think it’s cute to have some stitch lines, so I sewed around the edges of the flowers.  You don’t have to – it could be a no-sew project if you wanted. 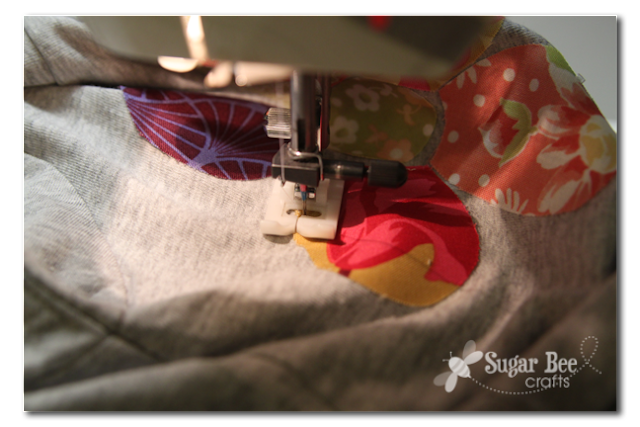 I just sewed a straight line around each petal.  You could also zig zag around it if you want to cover the edges. 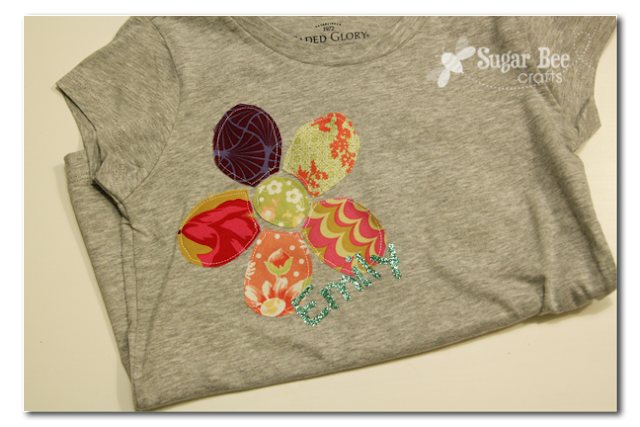 Since I didn’t cover the edges in stitching, it gives a cute “frayed” effect after washing.  The shirt on the left has been washed once and the one on the right hasn’t been washed at all yet: 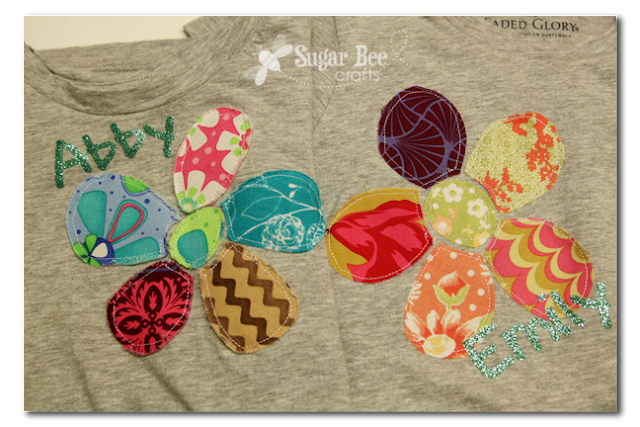 I cut their names out of glittery iron on vinyl – love that stuff. 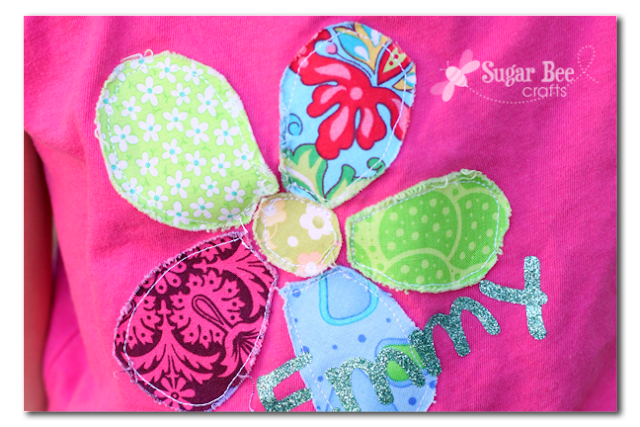 Since I didn’t get a picture of the birthday party crew making/wearing shirts, I drug my girls out for a quick couple of shots – they wanted to do a jumping high five… 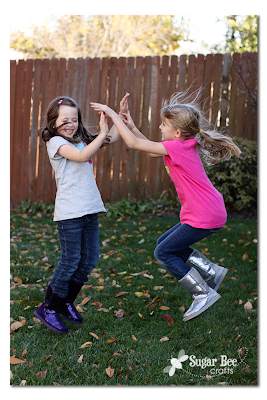 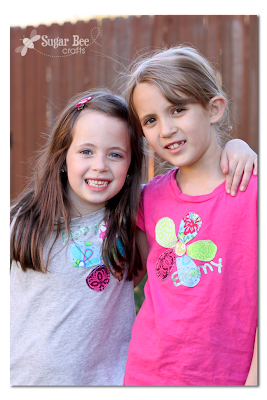 If you haven’t tried this easy way to applique on shirts, give it a go!