I have been mesmerized by circle quilts lately, and when I saw it as a holiday quilt, I knew that would be perfect! 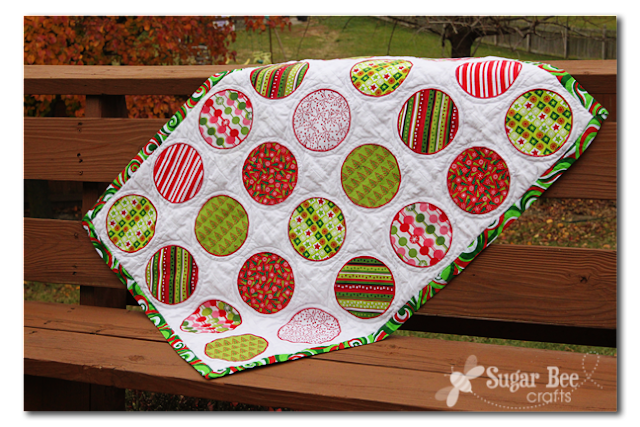 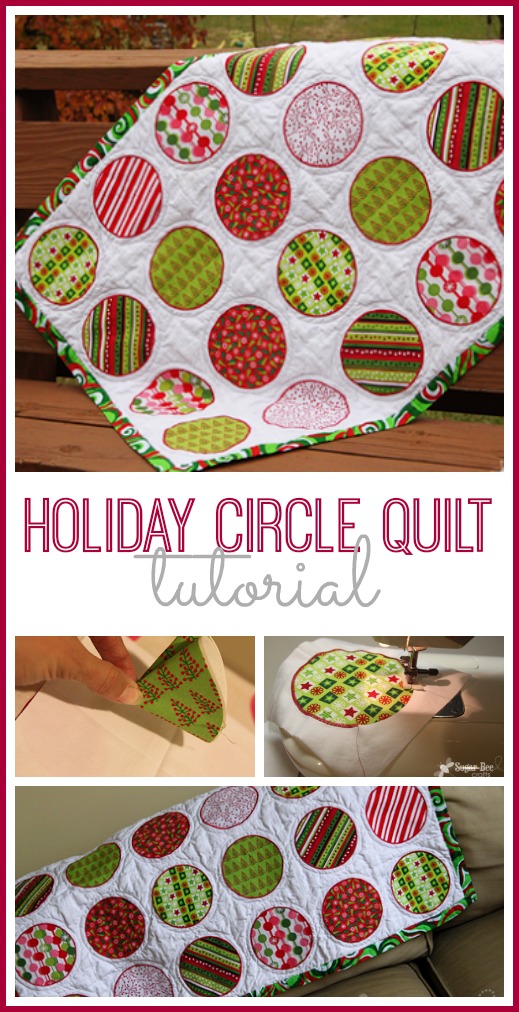 I have a few circles quilts pinned in my quilt idea board on pinterest – – I have one in my mind, the one that started my love of circle quilts, that is gray and blue but for some reason I don’t have that one pinned….but here’s a couple 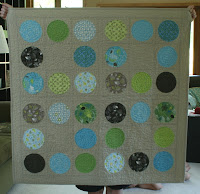 Craftiness Is Not Optional: 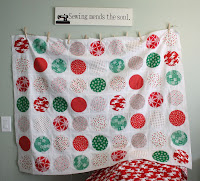 I just kind of winged it – – I probably should have read a few tutorials, but oh well.  Here’s a quick run-down of what I did:

–Cut a bunch of white squares – I, of course, used a sheet (so much yardage for cheap – – you can always find old sheets at garage sales and thrift store for a dollar or two).

-Cut a bunch of circles.  My fabric is all from Joanns this time around.  I used my GoBaby Cutter.

–Then I was going to iron the circles to heat n bond and cut out all the circles by hand, but at the last minute I had the genuis idea to run a stack of heat n bond through the GoBaby Cutter — let it do all the cutting work! 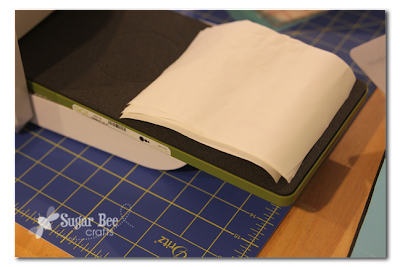 –So then I had a stack of fabric circles and a stack of heat-n-bond circles.  Heat-n-bond is great – it has glue on two sides that is heat activated, so you iron it to one side of your fabric then peel off the backing and that piece of fabric now is “iron-on” – it has a backing on it that will iron and stick to other fabric.  I thought using heat-n-bond would be easier than trying to pin on the circles and get them to stay in place while I sewed (trying that sounded like trouble waiting to happen!) 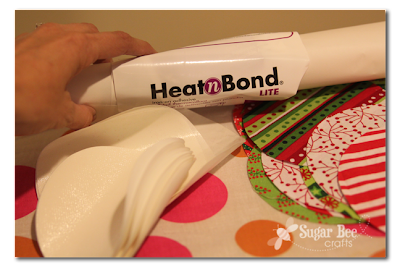 –Now, iron all your square in half and in half again — then unfold it and you’ll see a “plus” creased on the square.  This shows you right where the middle of your square is located.

–Since the circles have heat-n-bond on them, you can’t iron the plus into them because you’d melt the glue and stick the circle to itself.  I ended up peeling off the backing and using the “finger press” method – you just squeeze really hard with your fingers to make a crease.  So fold the circle in half, finger press the fold, fold in half again and finger press again – – 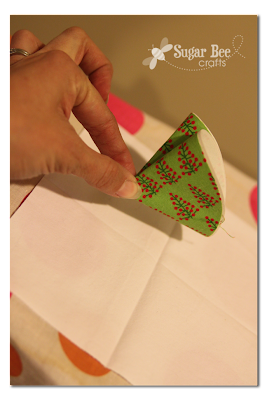 –Match up the “plus” on the circle and the square.  Now you know the circle is centered on the square. Then iron the circle down on top of the sqaure.  It’ll glue itself down.  You can kind of see the crease lines matching up in this picture: 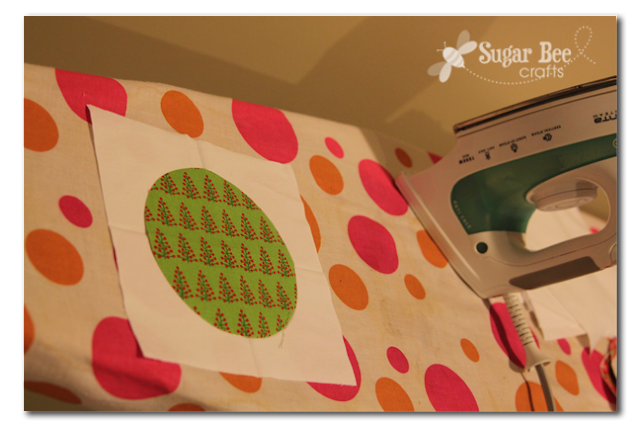 –Then, set your machine to a tight zigzag and go around all the circles – – iron the stitching when you’re done to help it lay nice and flat. 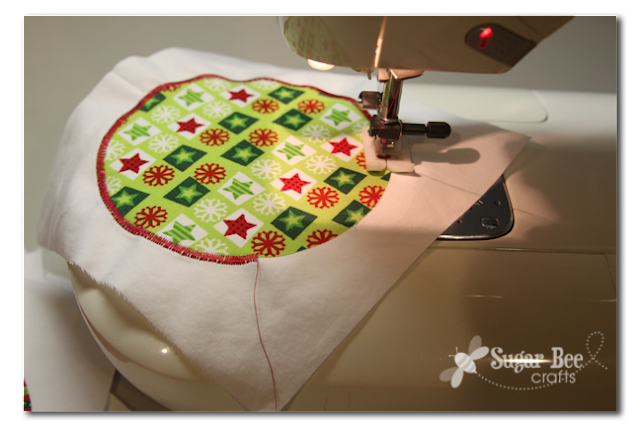 –I didn’t take many pictures after this – -oops.  You’ll just sew your squares together like any other quilt.  Sew several rows of squares then sew those rows together.  Once all together make a big stack – – backing, then batting (the fluffy stuff in quilts) then the top that you just pieced together.  Then to “quilt” it, I just sewed around each circle, about half an inch from the zig zag – – you can kind of see it in this picture: 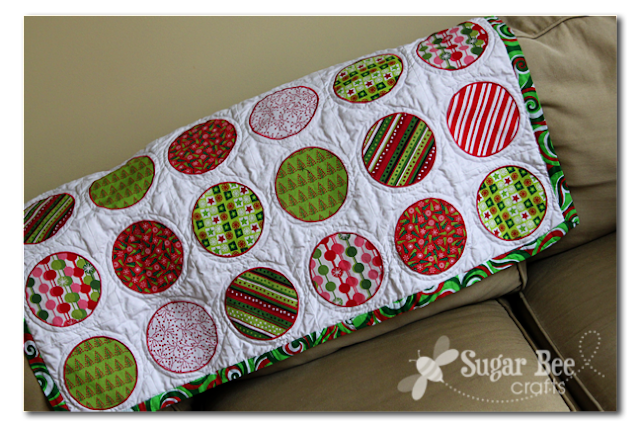 And you can kind of see how it made circles on the back of the quilt: 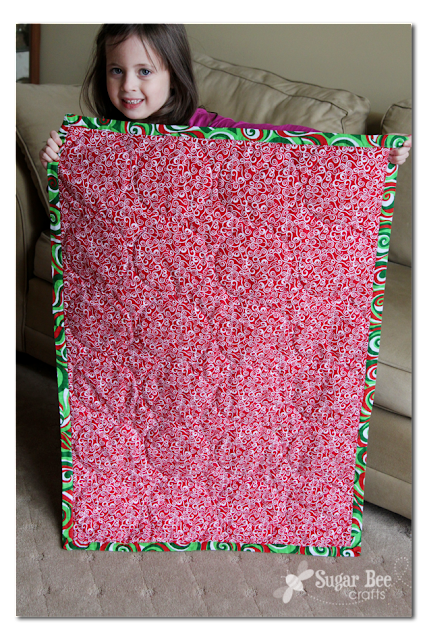 Then just sew on the binding.  I can’t give you pointers on that – I still struggle with nice corners, etc.  This binding I made from fabric at Walmart (oh how I love that our fabric department is back – makes running out to grab something quick so much easier – – joanns is a ways away).
You’re probably noticing this “quilt” is a little on the small side – – it was perfect for my attention span, and sewed up pretty quickly – so you still have plenty of time to make one!  I figured that it would just sit folded on the back of the couch, so why make it big if it just would get folded.  So I made it the size to sit on the couch without being folded – works perfect. 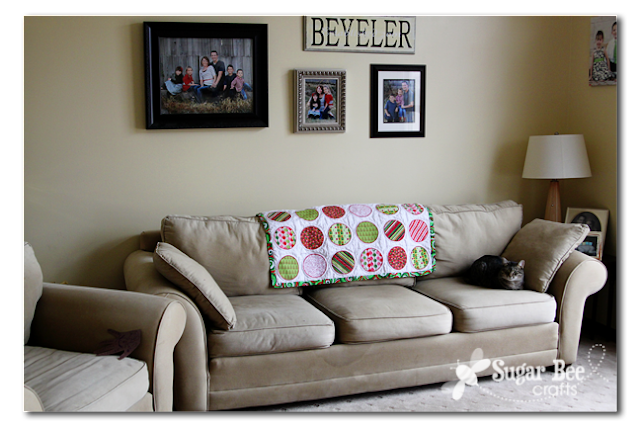 I had never sewed a quilt til this year, but then I was smitten with them and have made several  – – – check them out if you’re interested (follow the text links): 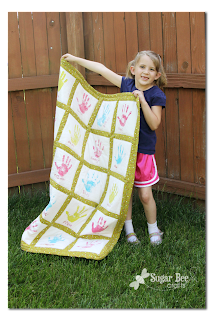 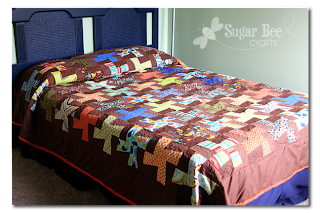 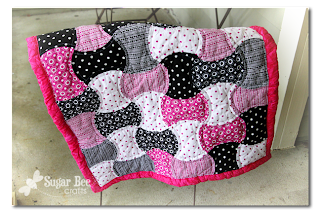 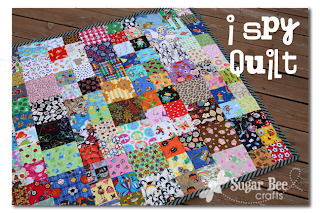