Did you see the cutest outfit I made my niece?? I’ve showcased it on facebook and Project Run & Play, but today I want to debut it here on the craft blog….I like this because it can be for Valentine’s Day, but is not overly themed so it can be worn year-round as well. 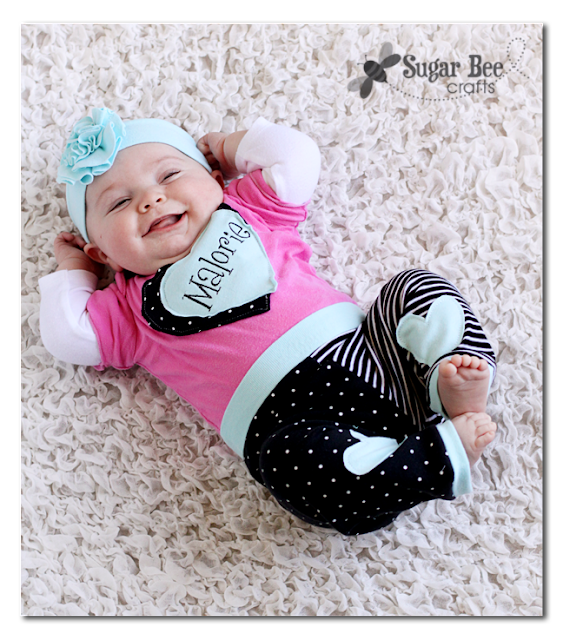 This is the first time I’ve done banded leggings and I will for sure be doing it again – – it was super easy and made for some super comfy leggings.  I am just starting to get into working with knits (aka, jersey from old tshirts) and I am hooked – once I got over the fear of it, I realized it’s fun and easy.

First, use your favorite legging pattern (I LOVE the go-to leggings and talk about it HERE) and cut the leg pieces out like normal, except for make them a little shorter, by about an inch (because the pattern allows for a hem and we won’t need that). If you want to embellish them – before you sew the leg pieces together, attach heart patches to the knees.  I used tshirt scraps, so because it was jersey I didn’t need to worry about frayed edges. 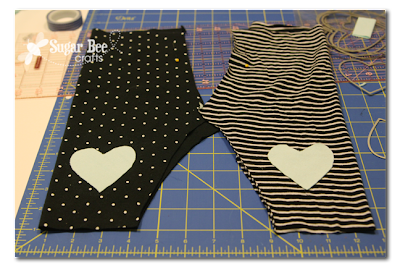 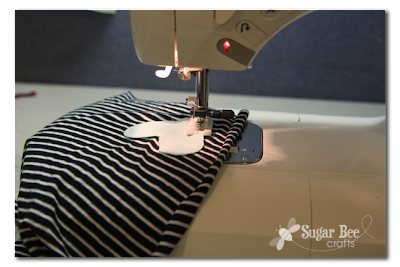 Lay out the leg piece and cut a band piece for each leg that’s the same width – – I also cut one for the waistband that is the length that the pattern calls for the elastic (since we’re doing a band instead of elastic).  In the photo my strips are folded in half lengthwise – so they’re probably 2 inches wide, and folded down to 1 inch: 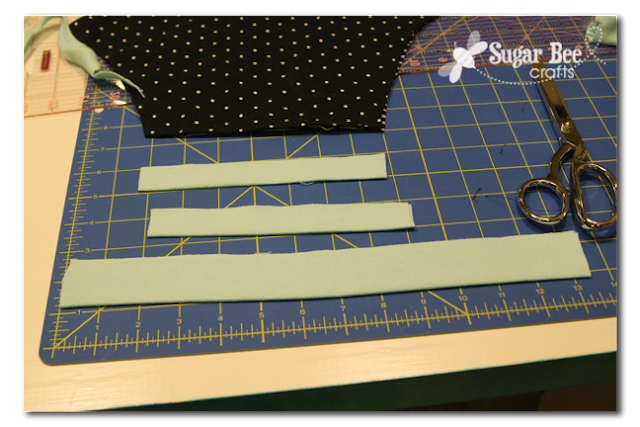 Then open up the fold and sew the short edge: 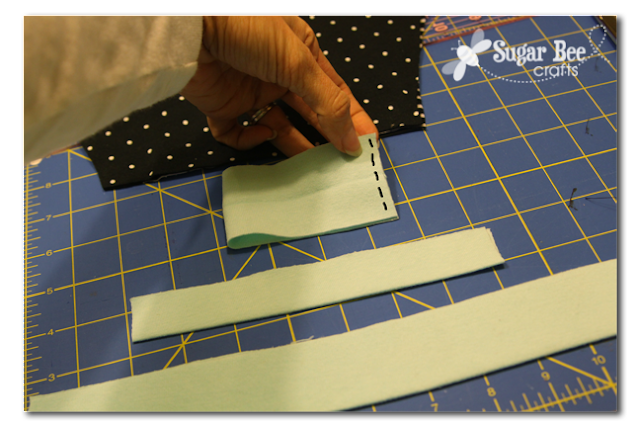 And then fold it back over when you’re done so it hides the stitching: 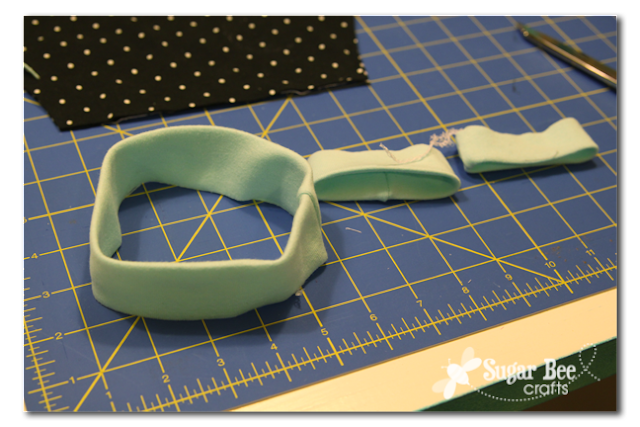 Sew your leggings according the pattern.  But instead of hemming the pants, we’re adding the band.  So with RIGHT SIDES TOGETHER (note – the picture is WRONG – it shows the pants inside-out, but they are supposed to be RIGHT-SIDE out), slip the band onto the leg and sew along the raw edges: 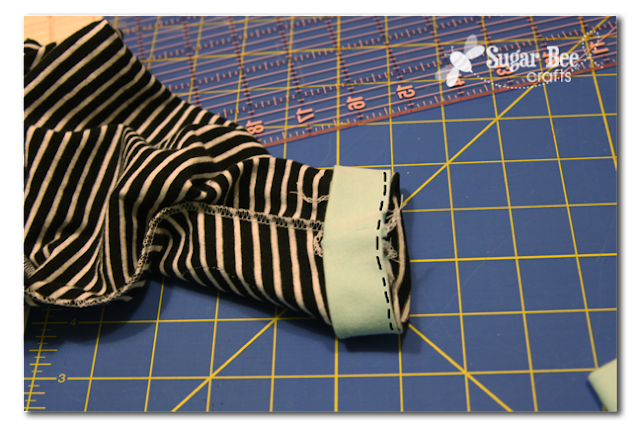 Then flip it and that’s it – see, easy! I didn’t have my niece there when I made them, so I guessed on the patch placement and got them a little lower than knees (so hard to tell where that falls on baby pants) but it’s still cute! 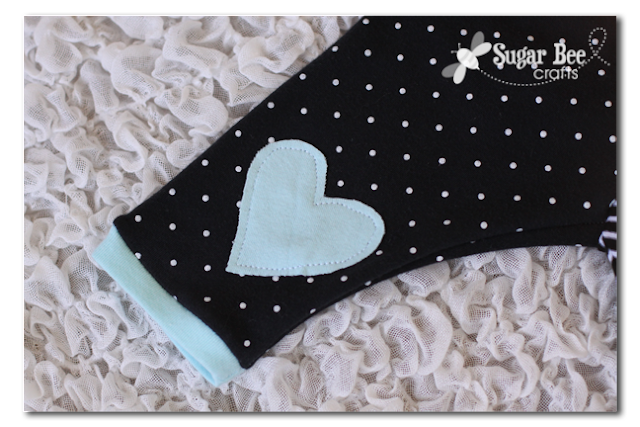 To do the waist band, attach it in the same manner as the legs.  If you want a tag, sew that on before you attache the band.  When attaching the waistband, you’ll need to stretch it as you sew because it will be smaller than the waist of the pants that you’re attaching it to – so just pull it until it matches the pants and sew it that way. 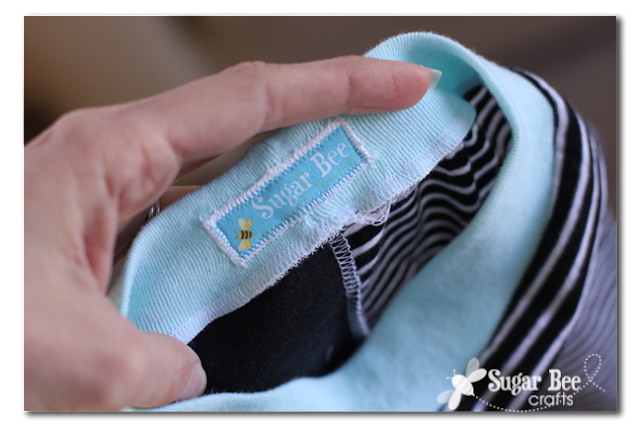 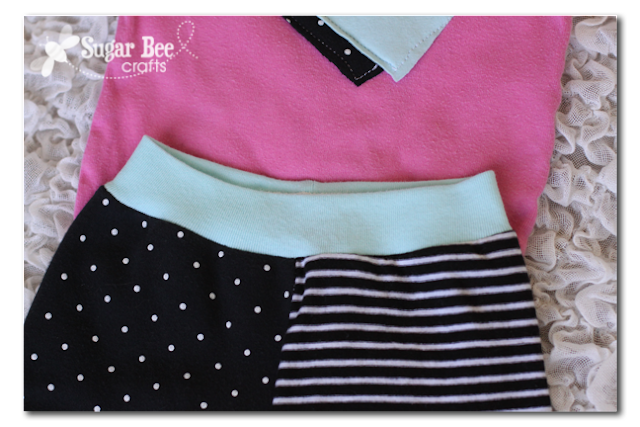 I embellished the shirt in the same manner as the knee patches – cut out jersy hearts and layered and sewed them on a discarded onesie I found.  If you want to add an embroidered name, I suggest doing that before you sew it onto the onesie – it’s easier to embroider that way. 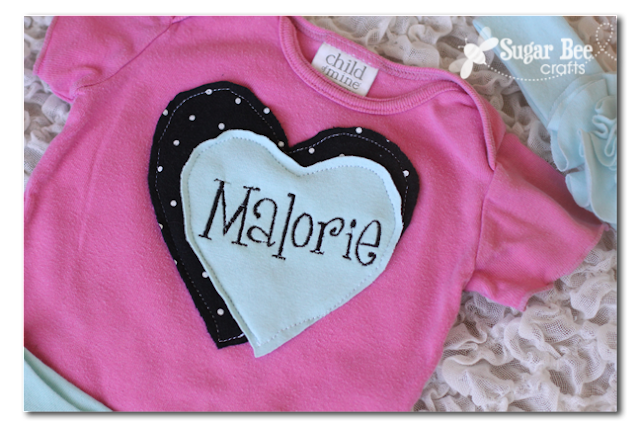 That’s it!  Go out and add a little Valentine Flair to your latest project.  And try banded leggings – you’ll love it! 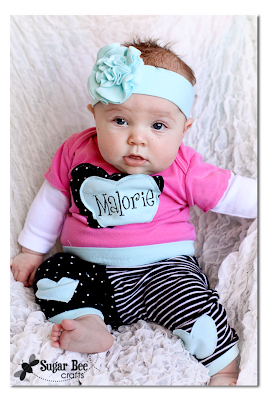 And another picture of little miss Malorie – – so cute!!  modeling and photo shoots are what happen when she gets left at my house…. 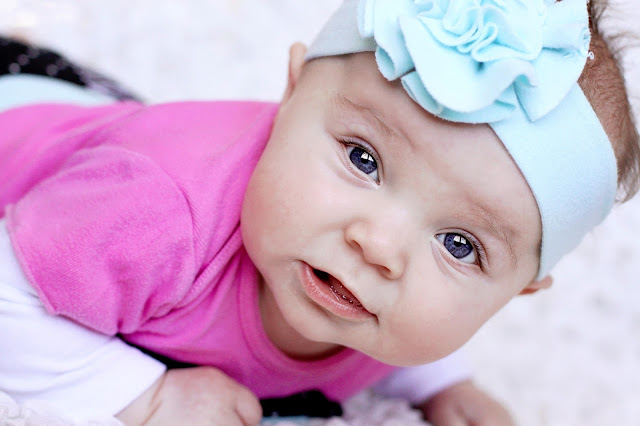