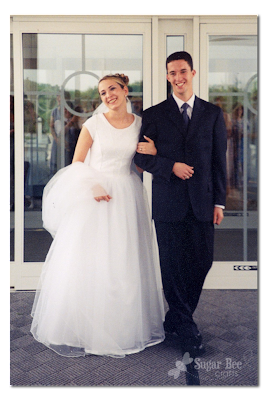 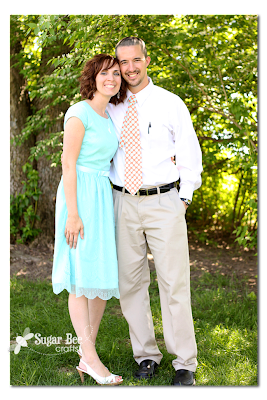 Today is our anniversary.  11 years of wedded bliss.
I thought I could tell you all about US.  If you care – – I love reading stories of how people met, etc.  But if you don’t want to, you can just skip reading Sugar Bee Crafts today.  Because hopefully I’ll con Trevor into writing his side of the story for a post this afternoon….
Anyways, let’s get started….
I went to college in Joplin MO.  Remember I’m from around Kansas City.  I wanted to go somewhere kind of close but kind of far.  I drew a 3 hour radius on a map around KC and visited several schools that came close to the circle.  Missouri Southern won.  I loved it.
Also remember that I’m LDS, aka Mormon.  Some places there are “single’s wards” or congregations that are just for Young Single Adults (YSA).  Joplin didn’t have one.  But there was a group of YSAs and we hung out, etc.  It was overloaded on the girls and there weren’t a lot of guys to choose from.
Well one weekend when I was home in KC, our YSA group had an activity with a nearby YSA group.  My friend met and started dating someone from there.  A few weeks later she called out of the blue to see if I wanted to go on a blind date.  With guys she knew of through this guy she was dating (who’d I’d never met). She was trying to set up another couple, but needed a couple extra people to go along so it wouldn’t seem like a double date. Now, when in a group of friends from church, you are friends with people you probably wouldn’t be friends with otherwise.  Every group seems to have a few odd people.  Super nice and all, just a bit different than me.  My friend was a bit different than me and I thought to myself  “oh my, who would SHE know??”  But, I had nothing going on, so why not.  So I agreed to go.  My roommate told me “I have a good feeling about this.  I have a 6th sense for these things.”
Yep, Trevor and I met on a blind date.  They work!!
There were 3 couples including us – not that we interacted as a “couple”.  It was more a group of girls and a group of boys.  We went bowling and out for ice cream.  It was fun, and he was cute and seemed a winner, but I’m pretty sure I didn’t say a word to him the whole night.  I’m sure I didn’t want to get my hopes up, cause I knew I was kinda dorky 🙂
But then the next weekend my friend said we should do a double date – – of course this time I was much more willing to go because I knew what I was getting into.  The guys cooked/burned dinner and then we watched a movie.  I don’t think I talked to him much that night either, but when I got home I told my roommate “yeah, I didn’t even really talk much – but if he asked me to marry him tomorrow I think I’d say yes.  there’s just something….”
It was my freshmen year of college – his too.  We were both 18 and giddy.  We lived about 45 minutes away from each other, so it was a bit of a drive, but we still saw each other all the time.  Often he’d come pick up and drive me back to his house, then drive me back again, making that roundtrip drive twice each night.  That’s dedication.  When we weren’t with each other, we’d spend hours on the phone talking about nothing.  You know the drill.
Now, side warning – pictures coming… You know how I don’t know what I’m doing when it comes to style in my WIWW posts – well, I think this may be the most “stylish” I’ve ever been.  So you can image my non-style of the past – so ignore that, my bad hair, and the fact that this was before digital cameras (that makes me sound old!) so I snapped pictures of the pictures I have inside this scrapbook thing I made of all my college years….
Our first picture together – – I think we look really young! 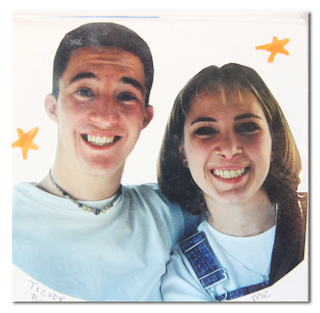 Another random picture – this is in my dorm room – – obviously I loved overalls (and still do – – the minute they come back in style, I’m so on it!!) 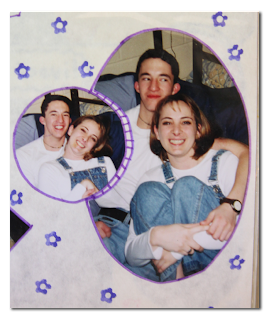 We dated the whole year – it was perfect.  I enjoyed every minute of being together and he made me feel like the prettiest, most special person in the whole world.  He had the same drive and determination that I did to excel at school.  We believed the same things.  You know you’ve found the right person when you tell yourself  “he makes me want to be a better person”.

He would occasionally come up to KC when I came home for the weekends…. 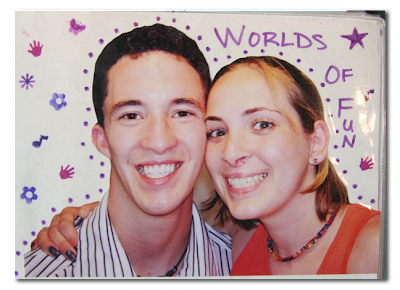 And he went on vacation to my grandparent’s lake house with my family: 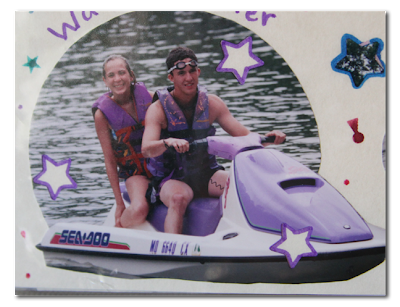 I chose to stay in Joplin and live on campus and take summer classes instead of going home for the summer. Because of him.  You know you’re smitten when you choose to take a full load of summer classes just to stay nearby. 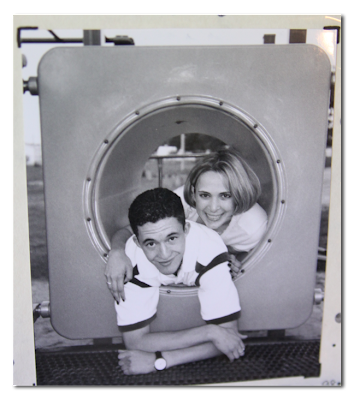 And then it was time to say goodbye.  He chose to serve a 2 year mission with our church.  He was being sent to the Philippines.  He didn’t ask me to “wait” for him – I didn’t say I would. 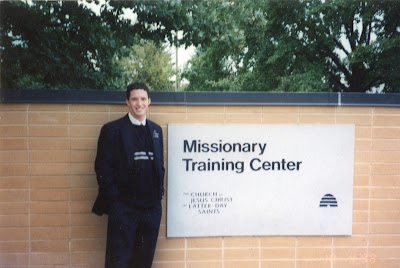 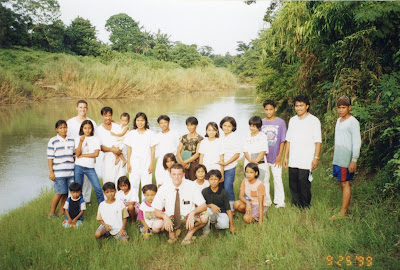 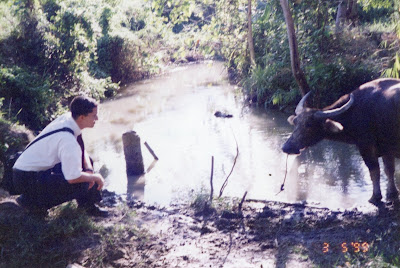 I wrote him every week.  It was a great experience to get to know him through letters even more.  I told myself that I knew he would grow as a person as he dedicated 2 years of his life to service and the gospel.  And so I wanted to strive to become a better person myself.  To be more – for him.

I hung out with his parents on the couple of days each year that he called home (looking back, super nice of them to let me talk on and on when I’m sure it was an outrageous phone bill).

I like to say “I waited, just not in a closet”.  I dated some when he was gone.  I told the guys up front that I was just dating, not looking for anything serious.  For me, I had found my serious.

So 2 years passed and he got back – I was in the airport.  It was awkward.  We went on a date that week or so – – that was awkward too – I knew he wasn’t going to come back and drop on one knee, but still, he mentioned maybe going away to school and I thought maybe I was delusional in “knowing” we were meant to be.  I found out years later that he thought I was in a serious relationship with another guy (this was news to me!).

Things slowly became less weird and we got back into the groove of dating again.  I don’t have any pictures of greeting him at the airport (I guess I didn’t want to be a stalkerish-maybe-girlfriend), but in my college scrapbook he all of a sudden starts showing up in pictures again…(he’s in white, I’m in gray – ice skating).  This was in the fall.: 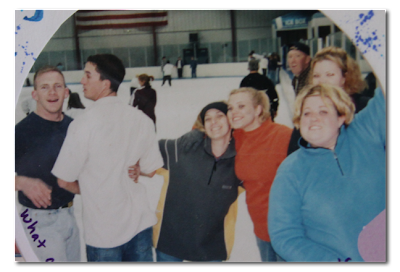 We dated all fall.  I graduated college (yep, early, in 3 1/2 years – due to the massive class load I took every semester and the summer courses I took that first summer). 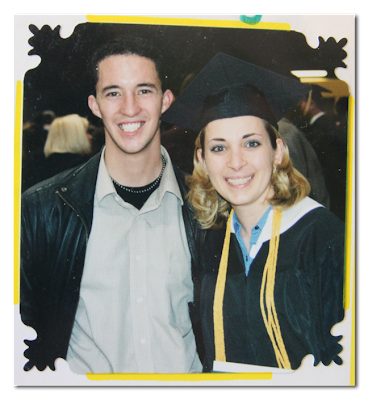 So now I had to grow up.  Get a real job.  Find a direction for life.  I knew I wanted it to be with him.  I think he knew too, but wanted to be sure.  He went on a trip to visit his cousin who set him up on several dates.  I wasn’t worried – I knew we were in love 🙂

He proposed in February — I think everyone saw it coming a mile away – my friends were taking bets on what specific day he’d pop the question.  He didn’t know it was obvious to all of us.  He asked me to marry him while on a picnic at The Falls – – later we took our engagement pictures at the same spot: 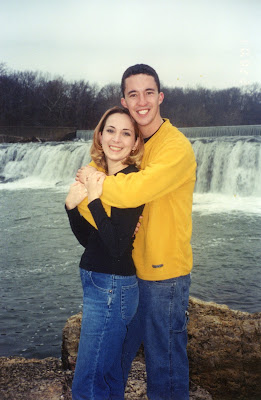 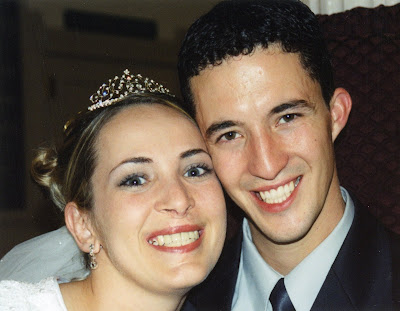 side note – my life-long regret will be not hiring a wedding photographer – what was I thinking….. 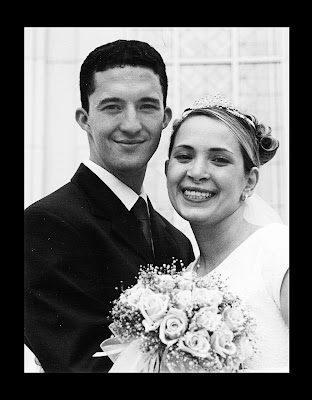 Fast forward 11 years, and here we are today.  I still think we’re meant to be.  I like to tell him that his whole family had to move to Kansas just so he and I could meet.  (They moved from Idaho to Kansas when he was in Jr. High and have since moved back.) 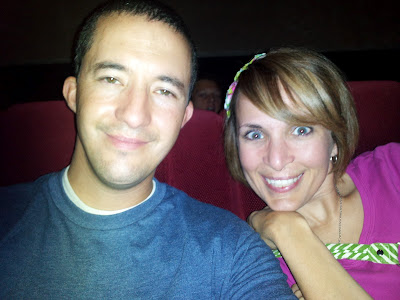 He still gives me butterflies when he looks at me – makes me feel amazing about myself and who I am.  Makes me want to do my best at everything.  Supports me in everything – yep, even blogging 🙂 .  Puts up with all the crazy requests for projects I need him to do.  Goes in with me when I think we should try crazy races…. 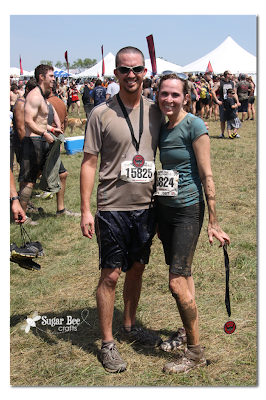 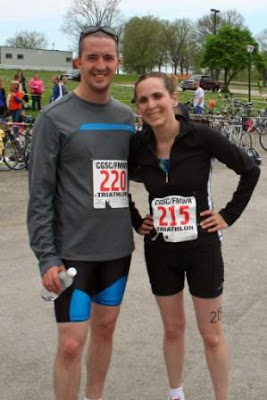 He gives me the love, support, and confidence I need.   I can’t imagine a better husband.  Not to mention that he’s an amazing dad to our 4 kiddos.  I marvel all the time – “how did I get so lucky?!?!” 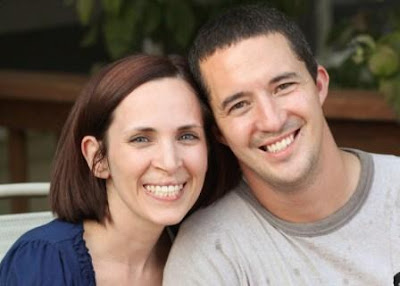 I love that I get to spend forever with him!!!