1 shares
You know when you get on a kick for one thing?  Like if I’m sewing, then I do a lot of various sewing projects, or try to crochet then I want to try several things.  Or when I sit down to cut vinyl – while the ole Silhouette is fired up I cut a bunch of stuff.
Which I did lately.  So I thought I’d dedicate today to vinyl.  And I have something for you too – read til the bottom (that’s how I make you stick around til the end) 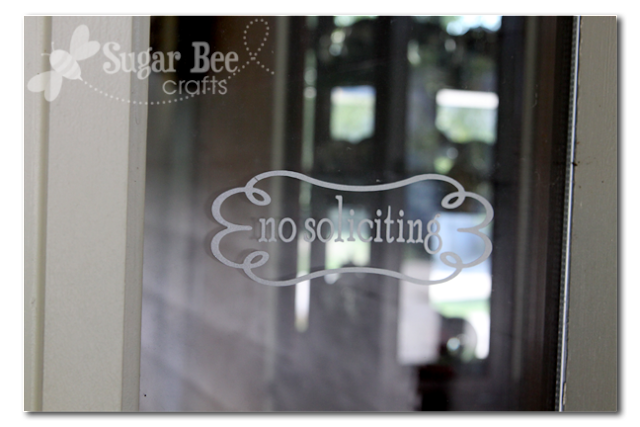 So first up, we get tons of door-to-door salesmen – really!  I try to politely turn them away, but the last guy wouldn’t leave after I said I wasn’t interested, a half-dozen times.  He even started to pull out my porch chairs and said “let’s just sit here and check out {whatever he was selling}” – I said “I’m shutting the door now” and thought, well it’s time to get a No Soliciting sign!
So I cut one out of “frosted vinyl” – – it’s supposed to look like etched glass, so it kind of blends in.  No one has tried to sell anything since – coincidence? maybe, but I’ll tell myself it’s the sign… 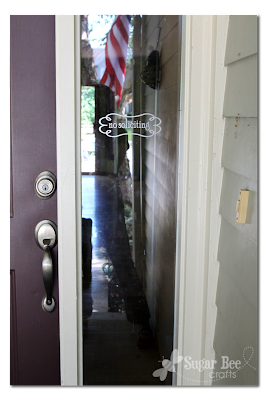 Anyways, the Silhouette is super easy to use, and while I had the frosted vinyl in there, I thought I should cut one for you too!  It’s just as simple as copy-and-paste what I already had designed.

So I have one to giveaway – – just be a follower of my blog (since it’s my giveaway, I get to make you like me 🙂  ).  Leave any sort of comment on this post. I’ll pick a winner this weekend sometime, so it’s a pretty quick turnaround.

Stick around all day – – more vinyl, coming up….