These fun sock snowmen are really fun and easy to make and you probably have all the supplies you’ll need hanging around the house. 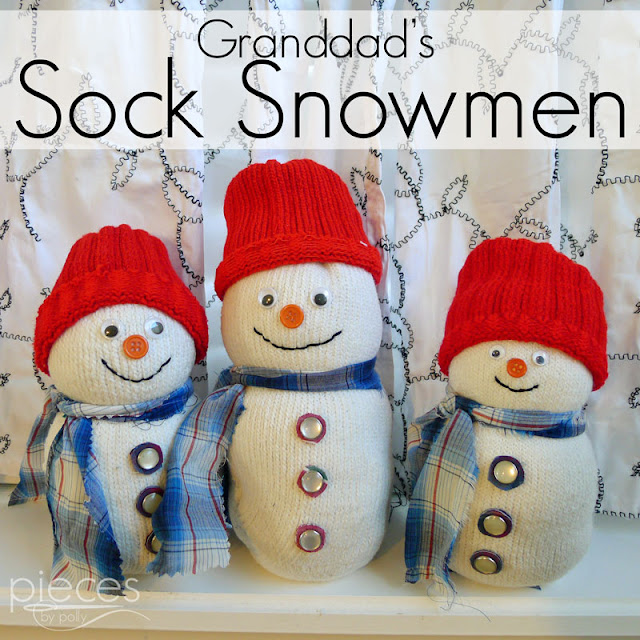 I’m Polly and I’m excited to be a guest at Sugar Bee Craft today.  Thanks for having me, Mandy!  I blog over at Pieces by Polly where I share bits and pieces of the sewing and crafts that I love.  I post about all sorts of sewing and crafts that are kid related, and have a special love for quilting and geek related projects as well.

We love a good upcycle project at our house and this is one of those projects that offers a lot of flexibility and leaves things open for a lot of creativity. 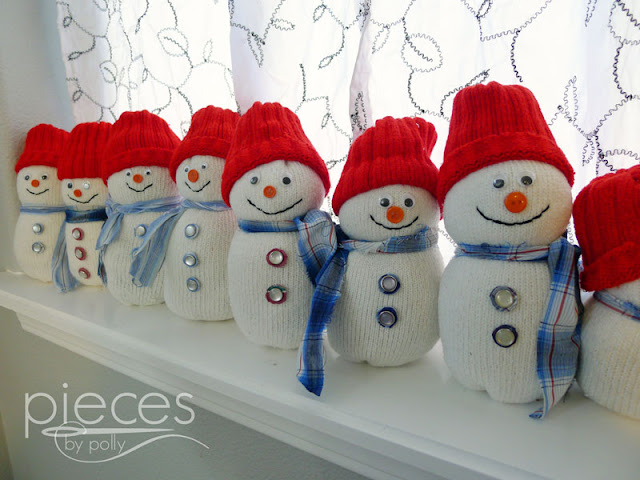 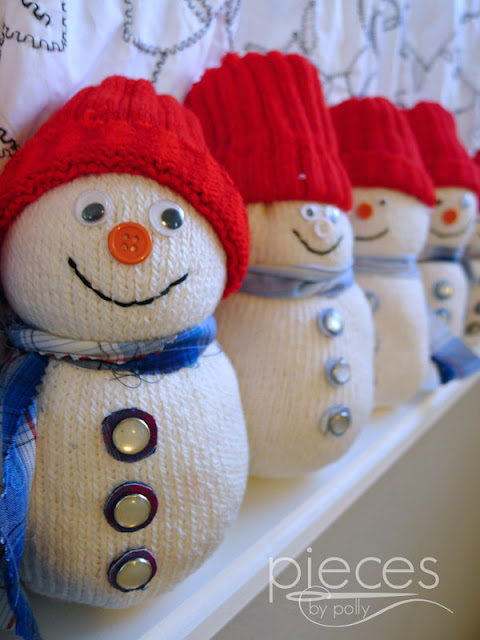 Earlier this year my much loved Granddad passed away.  Granddad nearly always wore boots to support his weak ankles.  When I asked for some of his old clothes to make a memory quilt for my Nana, I was also given a large bag of his nearly new looking boot socks. 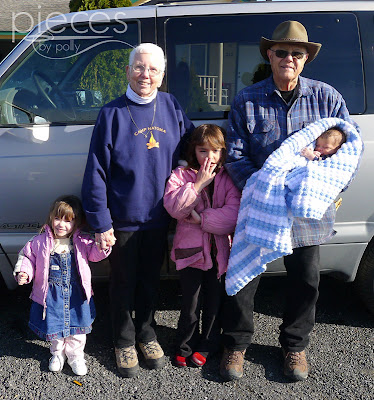 I was on the verge of donating the socks when a friend mentioned she was looking for socks for a snowman project.  I offered her some of the socks to make the project with her kids, and then realized they’d at I should make them too.  In fact, I ended up making 19 of them…enough to give one to each of my siblings and cousins with a few left over, so that everyone could have a little reminder of Granddad. 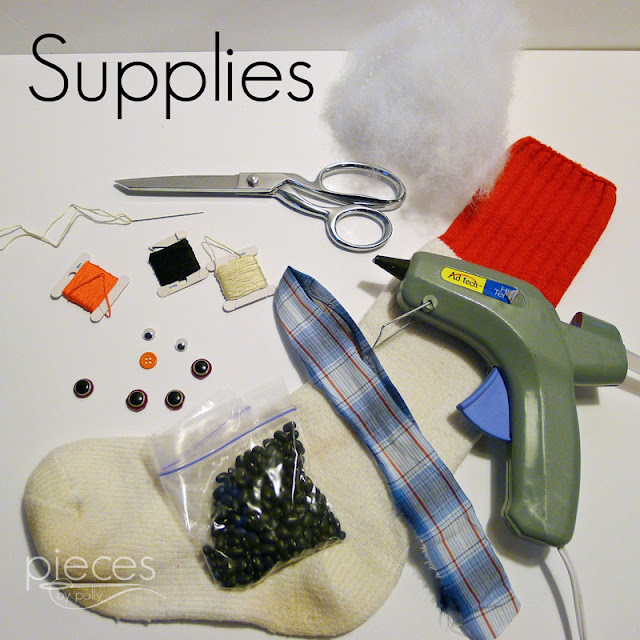 Here’s what you do:
You start by cutting your sock into section.  These boot socks were big enough that I could make a snowman out of the foot or out of the leg part, so you might be able to use either depending on your sock.  Using the foot part has the advantage that one end is already sewn shut which saves time.  However if your sock has been worn much, the foot part will be the first part to show the wear. 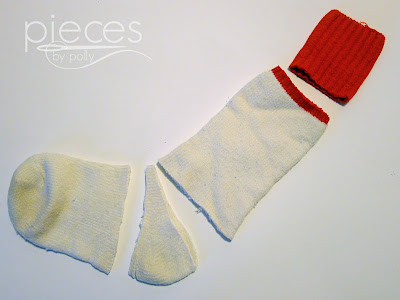 To make the snowman’s hat, we’ll start by turning the colored part of the sock inside out.  Use the needle and embroidery thread to make large running stitches about 1/2 inch in from the cut edge of the sock.  There’s no need to be neat with these.  Once you’ve gone all the way around, cinch the thread up tight to close off the end.  I chose to use embroidery thread because it was the strongest thread I had.  Knot the thread several times, so it won’t come loose.  Turn your hat right side up and fold the original edge over to look like a stocking hat. 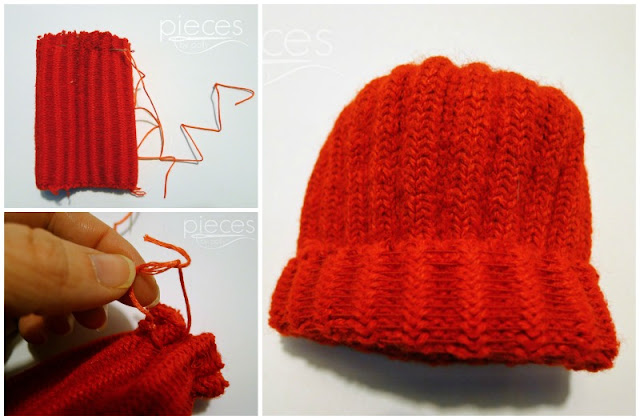 Now we’re going to do the same thing with our snowman’s body.  Turn the sock inside out and do a running stitch around one edge of the sock.  Cinch the thread tight and tie a good knot.

Turn the sock right side out.  Place a small ziploc baggie with beans in it at the bottom.  The beans are important for making the bottom heavy so your snowman will stand-up easily.  Then add any scraps left over from the sock you’re not going to use.  Then stuff the rest of your snowman with regular stuffing until he’s full.  Then do the big stitches around the top, cinch it tight and tie a secure knot.

Now we need to use some more embroidery thread to give our snowman a neck.  I wrapped the thread around the snowman once, did the loop to start a knot, then pulled the thread around again before actually tying a knot.  The thread seemed less likely to slip while tying that way and there is two thicknesses of thread around his body.  Tie the knot securely and  trim the ends of the thread.  Then take a scrap of fabric, 12-18 inches long and tie it around the snowman’s neck as a scarf.  I used pieces from some of my granddad’s old work shirts for the scarves…not really Christmas colors, but they’re special to us.  Then add the hat. 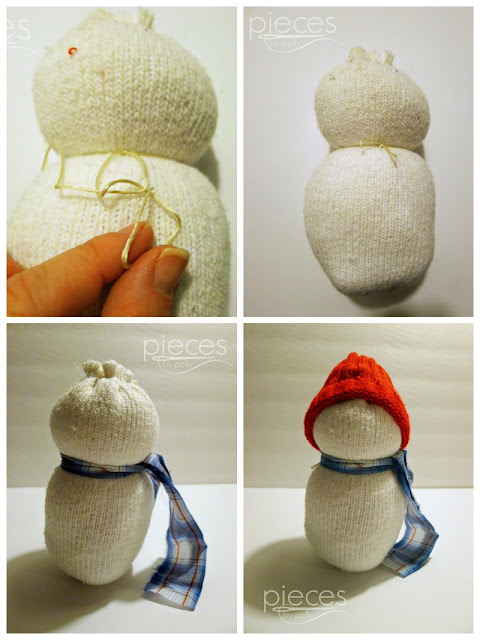 You really could stop at this point for a faceless snowman.  I actually kind of like that look, but my experience with kids is that they get concerned about where the eyes are, so we gave our snowmen faces.

I liked to have the hat on before I started on his face.  That gave me a better idea of where his features should go.  I did his smile first.  You could draw the line on before started, but I just stitched free hand.  To stitch the smile, I did NOT put a knot in my thread.  I used a large needle and stick it into the snowman where the ear would be and had it come out where I wanted the smile to start.  Then I pulled the thread until the end had barely disappeared into the snowman’s ear.  (That will leave a thread tail inside the snowman to keep the mouth from coming off.)  Then I back stitched the mouth in place…you can play around with whatever stitch you figure out though.  There’s no wrong way to do it.  When you’ve finished the smile, you’ll stick the needle through to where the snowman’s other ear would be.  Pull the thread all the way out, and snip it as close to the snowman as you can. 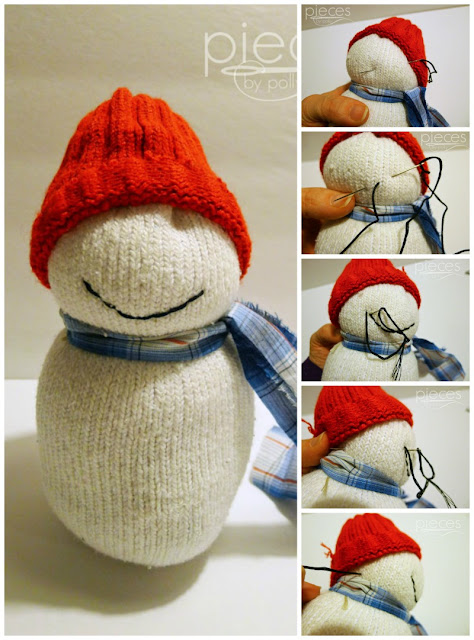 And all that’s left is to use a glue gun to glue the face and buttons on.  If you’re having kids help you, tacky glue should work fine too to avoid burns.  I used google eyes for the face.  (I’d been hoping to find some kind of solid black beads…but when you live 45 minute from the craft store sometimes you go with second best.)  The nose is a small orange button. 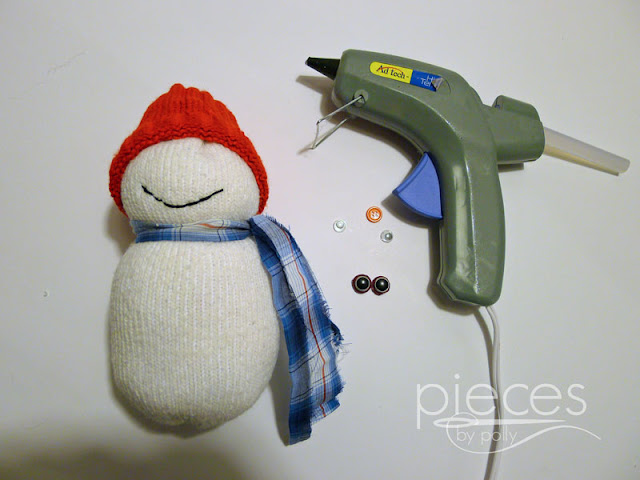 And I think the “buttons” on our snowmen are pretty cool.  Since I used scraps from Granddad’s shirts for the scarves, I’d planned to use the buttons from his shirts too.  Turns out that all of Granddad’s shirts used snaps instead of buttons.  (I’m not sure if that’s true of all western-cut shirts, but it was true of all my Granddad’s.)  When I cut the snaps off, a little of the fabric had to stay too, and I think it made for a nice effect on the snowmen. 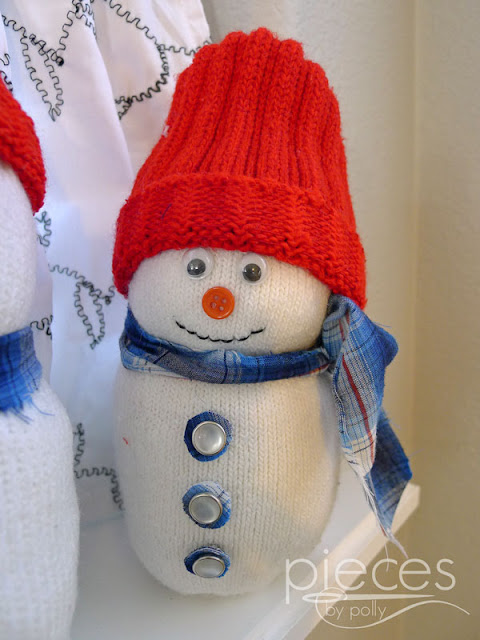 In fact, one of the things I love about these is how a slight variation in the smile shape and size or placement of the eyes can make for such different and fun expressions from the snowman.

I think this guy with his slightly crooked smile is my favorite. 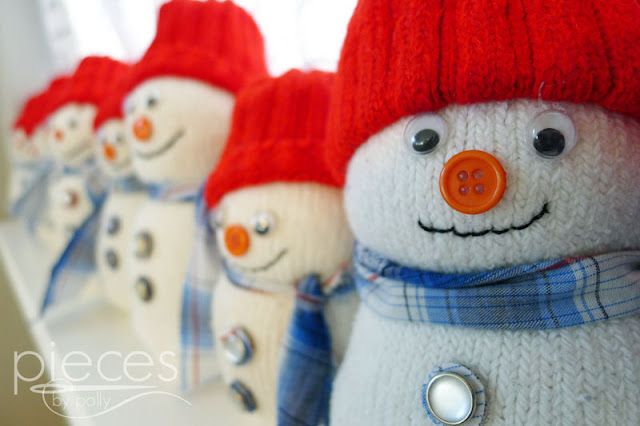 Our snowmen have lots of friends, so there’s enough for all of my siblings and cousins with a few extras left over.  Hopefully everyone will find them to be a happy reminder of Granddad and fun addition to their Christmas decor. 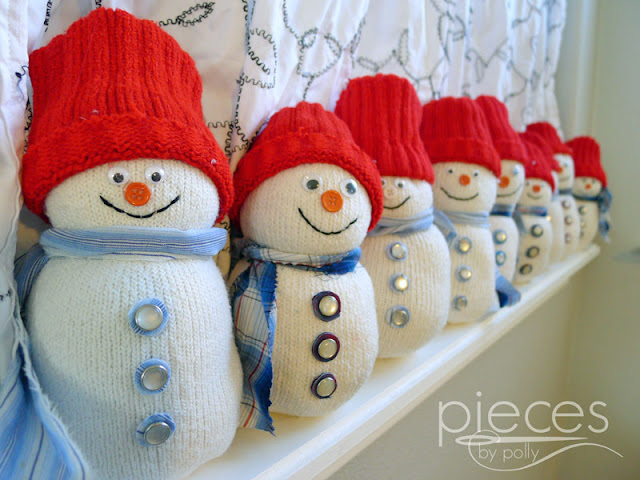 Hope you have fun making your own little snowmen families!

Be sure to stop by at Pieces by Polly and say hello!  I’m currently hosting a Quilt-Along for making a Nativity Quilt.  You might also like my tutorial for a “braided” fleece blanket edge if you don’t like all those knots in a traditional blanket.If you’re interested in more upcycling projects, you’ll want to check out my upcycling page here.