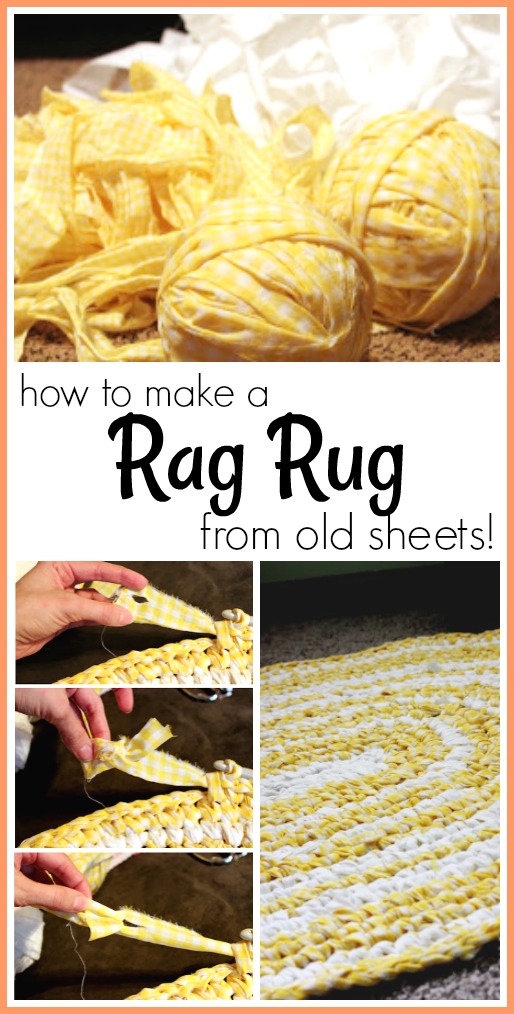 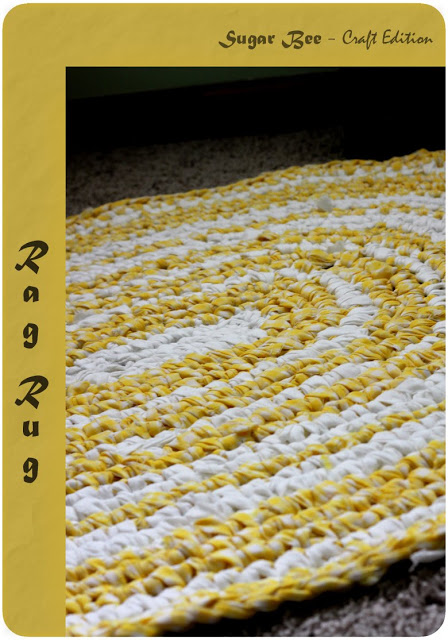 This is a perfect project to tackle while watching a show, movie, or even the Olympics! (I think I’ve already mentioned that I LOVE watching the Olympics – every sport is so fascinating!)  I normally don’t watch so much TV, so I feel like I need to do something while I’m watching.  It had to be something I could sit and hold, that required minimal thought.  This yellow Rag Rug was perfect – I made it while watching last week.
Last summer Olympics I did the same project using different sheets and material – I made it for my girls’ room and I actually like it better than the one I just made, but I wasn’t in tutorial mode back then.  Here’s a visual so you can see how the rug looks in different colors and shape (round versus the oval). 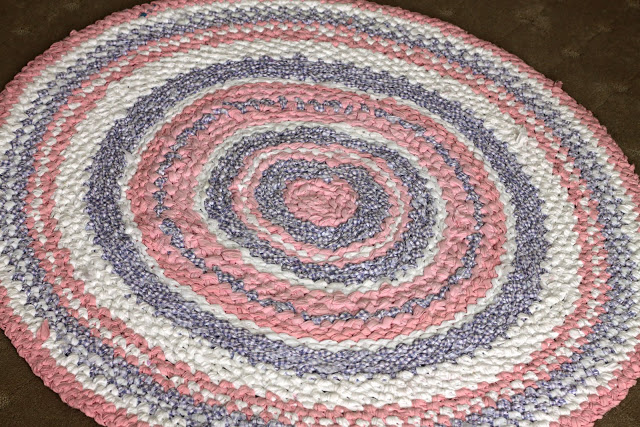 How To Make a Rag Rug

–Fabric (I used old sheets! check the thrift store for a deal!), or you can find sheets online.

Rag Rug Tutorial: First, gather some fabric – if you go buy it, this project is going to cost more than you want it to.  I suggest using old sheets – keep your eye out for them at thrift stores and yard sales.  The pink/purple is from sheets – the yellow/white is actually discarded curtains I had made years ago to divide a room.
After finding your fabric, turn it into strips – mine are about 1 1/2 inches wide but I didn’t measure each one – just guesstimate.  You can cut them, but I found that ripping went much faster.  To do this, just cut  the starts to your rip lines, then rip the rest, as shown.  Then wind up the strips into balls – it’s an extra step but you’ll be glad you did it. 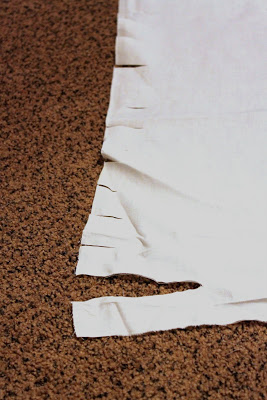 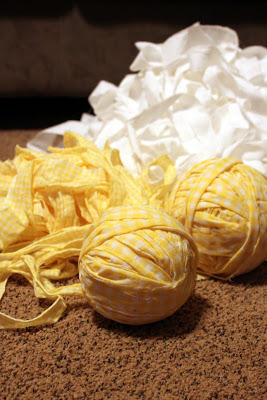 Now I don’t want to scare anyone away, but this is a crocheted rug.  Don’t panic if you don’t crochet – it’s really just making loops using a hook.  You can do it.  Go buy a big hook.  Here’s a video on the basic loops you’ll be making – watching it, you’ll think, “that’s it?! I can do that!”
Did you see where you poke the needle in to grab the loop?  Here’s a picture – usually it’s not so defined, but I stuck my finger in the holes so you could get a good view.  And if you can’t find the exact hole, don’t worry, something close will work. 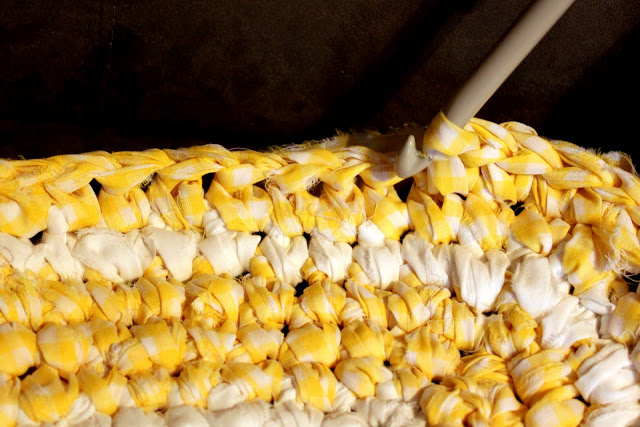 If you’ve watched the video or noted the picture, you know that I started in the middle of the project.  That’s because I wanted you to know how easy it is once you get started.  The downside to crochet is that the beginning is always the hardest – and who wants to start something they’ve never done at the hardest step? – no one, but trudge through it and it will get easier, I promise.  So here’s the beginning, via video:
Once you get a middle to your rug started, you just go along making loops like the first video showed.

Now, if you glazed over the videos because you know the basics of crochet, then let’s get back to the rug.  Think about running around a track – the person on the outside lanes has to take more steps than the person on the inside lanes to make it around – they can take the same amount of steps on the straightaway.  So you make crochet stitches along the straightaways, but when your making turns (a circle rug is just one big turn) you’ll want to make a chain stitch every handful of stitches – that’s like taking an extra step to make it around.  You make a chain stitch like I showed how to start – you don’t poke into any holes, just make a loop on the strip.

Another thing unique to rag rugs versus normal crochet – your balls aren’t one continuous strand.  You don’t have to sew them together – there’s an easy solution.  You cut a small slit in the end of a strip – then thread the beginning of the next strip through the slit, and fold it over – hopefully you can see how in the pictures on the left. 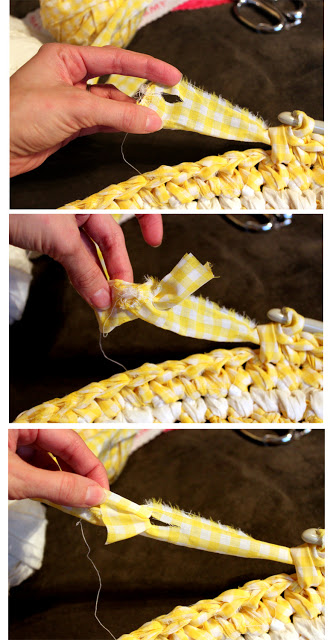 You’ll have to let me know if you have any questions and I’ll do my best to answer them – obviously I’m no crochet expert (I can’t even remember what this stitch is called – double crochet?) but I’ll try to let you in on what little I know.

You just keep going around and around until it’s as big as you want it.  After you’re done, you tuck in any strips ends that are showing (there will be a lot) – just push them to the underside of the rug.  I was aiming for a smallish rug.  Mine got a little wonky in the end, but that’s what I get for not knowing how wanting to use a crochet pattern or anything.  I think I just added too many chain stitches around the corners be cause they don’t lay completely flat – but I’m just claiming that it’s the charm of handmade (and I stuck the weirder side under the changing table so it’s less noticeable). Hope you enjoyed this Rag Rug Tutorial!
Even though it’s a bit wonky, I think it warms up the corner in my  little boy’s room. 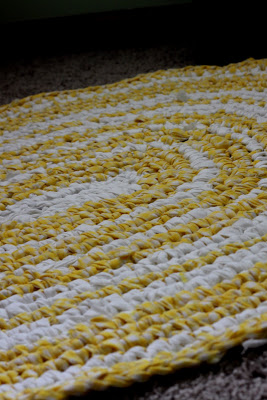 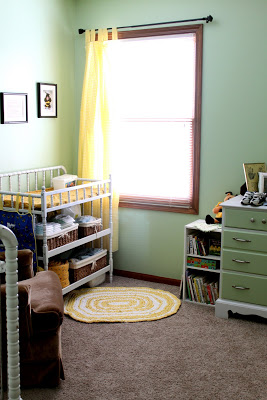 My goal was a cozy little corner where he might want to check out a book or two.  I guess it’s working, maybe a smidge too well…. 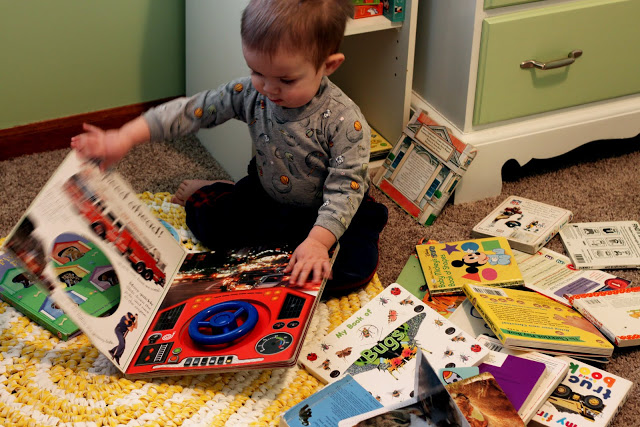 If you love DIY Rugs, I have a bunch of other ideas you won’t want to miss!!  20 DIY Rug Tutorials: 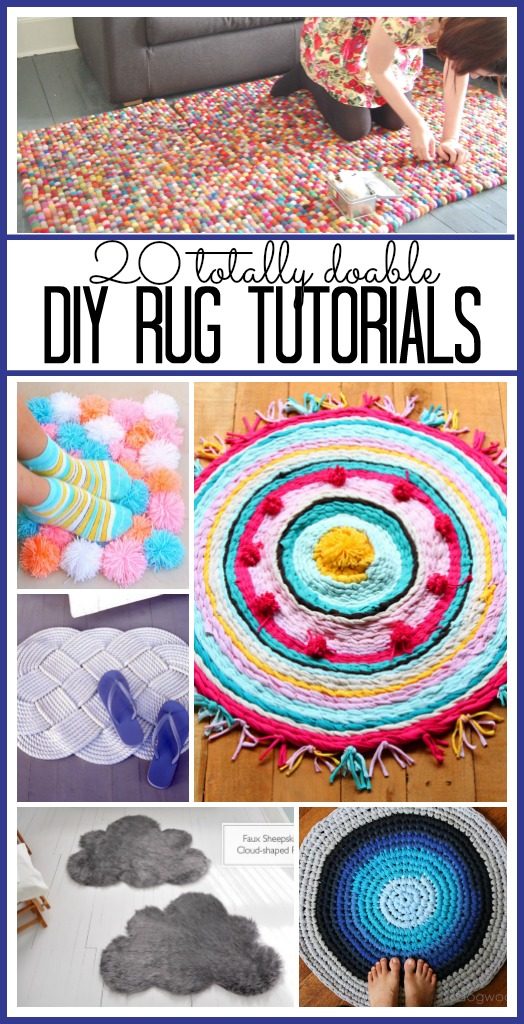