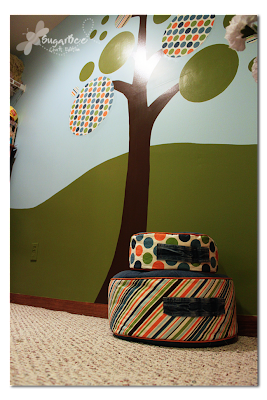 I just thought that every tree needs a place to sit under it.  So my tree was begging for some floor cushions.  And ever since the idea was linked-up on my Take-A-Look tuesday, I’ve had these floor cushions from Living with Punks on my mental to-make-soon list.  About that same time the blog Lucky Star Lane was doing a post about using denium, so I had it in my mind to combine the ideas – denium floor cushions.  So that’s what I did – – follow the above link for the full tutorial, but here are my tweaks:

I thought it’d be fun to have a patchwork look, plus I was using an old pair of overalls for my denium, so I couldn’t get one large piece out of it anyways.  I cut 9 squares out like so for each side: 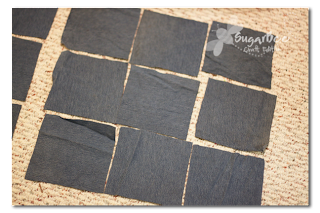 Then I sewed then into rows, then I sewed the rows onto each other.  I do not claim to be a quilter, so everything didn’t line up perfectly, but eh, it’s just a floor cushion so perfection wasn’t needed. 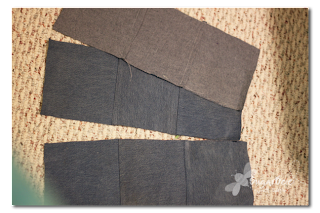 To cut a 17 in diameter circle, I measured my biggest bowl and then added  a couple of inces all the way around. 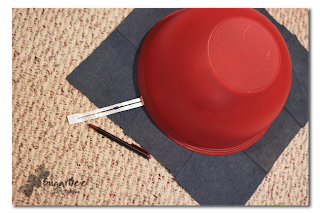 Then I didn’t want my cushion quite so tall so mine middle is about 7 inches high instead of 9 inches.  For the handle I just used the strap part of the overalls.  The edges were all finished except for one, so that was perfect. 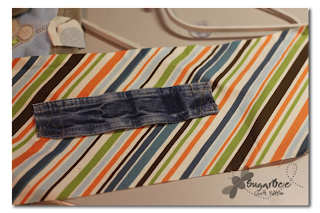 I should have taken a picture of the piping packaging to show you.  I looked all around the cording and pillowmaking section, and found some piping there, that you buy by the yard, but it was all decorator stuff and tasteful colors, not the orange I wanted.  Then I happened upon what I needed – prepackaged piping, and it hangs out with the packages of bias tape, kind of near the thread.  You’ll need 2 packs.  Piping is easy so don’t be intimidated – you just add it between the 2 layers you’re sewing – easy, and it gives such a nice finished look.  You will need to use your zipper foot on your sewing machine to let you sew close to the piping. 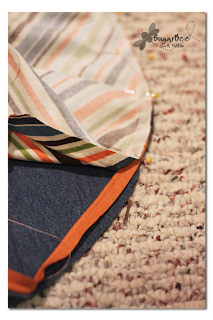 Then just fill it.  I bought an old bean bag from a garage sale for just this purpose.  I let the kids help fill it.  When I took the picture everything was under control.  So I let them at it while I was checking blogs – mistake – if only I had taken a picture after I heard them say “look, it’s snowing inside!”… 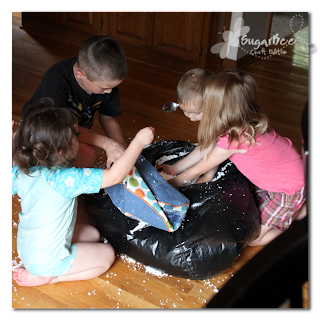 Oh, I forgot to mention, when I cut the squares, on the back side of the cushions one of the squares was cut from the pocket of the overalls.  So there’s a “hidden pocket” – the kids enjoy it. 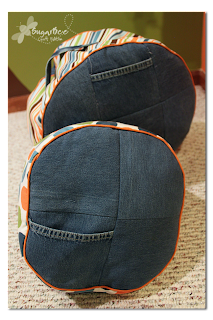 I made the bigger cushion first, and then realized I had enough piping left to make a smaller cushion.  It’s 4 squares and I just measured how much piping was left and made that my circumference.
I love these cushions!! 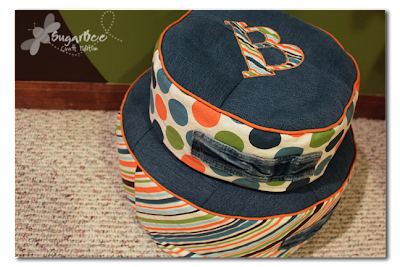