44 shares
Alright everyone – it’s about to get crazy!  I am part of SoYouThinkYou’reCrafty All-Stars.  This time, there’s a twist – it’s not anonymous!  So you know which one is mine – and you know I’d love your vote – – head over there to do that.
This is my entry, the extended version just for you, the beloved readers…
Bathroom Hook Organization 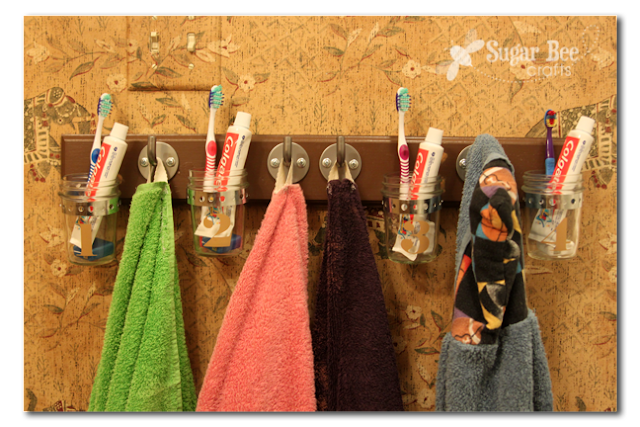 Our hall bathroom – aka the kids bathroom, aka the elephant bathroom (see “lovely” wallpaper) – used to be a nightmare. 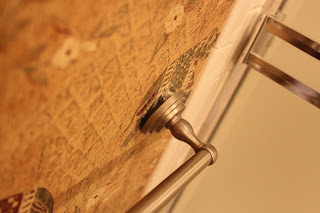 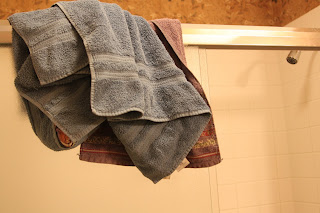 The towel rack was coming out of the wall and towels were piled on the floor – even if the towel rack were functioning, kids can’t use those!  Looping a towel over and through just isn’t one of their skill sets.  There is one drawer in that bathroom and when all four kids are brushing their teeth, fighting each other for drawer access – yikes!  So I saw a simple cup idea on pinterest (linked to THIS Etsy Shop) and expanded that idea to work in our situation. 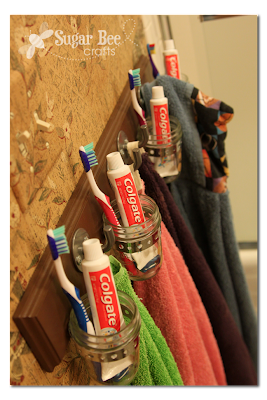 First up, I splurged the $4 and got each kid their own toothpaste.  Now they each have their own supplies in their own spot – no more drawer fights.  Each cup is numbered for cuteness with vinyl numbers I cut with my Silhouette Cameo. 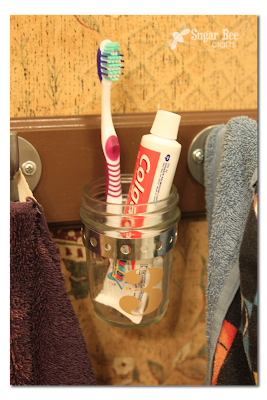 To attach the cups to the board, I used pipe strap (that metal strip with holes in it).  I should have taken pictures for you, but basically you wrap it around to the right size and cut it (I just used regular scissors).  Be sure in the back it overlaps on one hole.  Without the glass jar in, put a screw through the overlapping holes into the board.  Then place the jar in – mine had a lip so the strap won’t slip past it.
Probably one of the most important aspects of this mini-bathroom organizational makeover is the loops sewn on to the towels.  Makes it SUPER EASY to hang them up.  To do this I just folded a towel in half to find the middle, then sewed a piece of scrap binding stuff, sewing at each end of it so a hook can fit into it.  I was sure to give each kid a different color of towel so they know which is theirs. 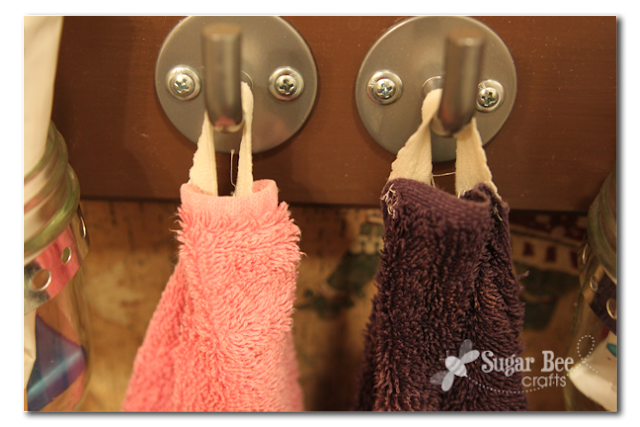 To attach it to the wall, I just screwed straight through the boards, being sure to hit studs so it wouldn’t be pulled down.  I filled the screw holes on the front with wood putty and touch-up paint so you can’t see them.


I am happy to say that this Bathroom Hook Organization has worked wonders!!  Why didn’t I do this years ago??  So simple, but so effective.  So here’s to hoping I can get your vote for an easy way to organize the towel disaster and drawer fighting that comes with a kid bathroom.