first off – – i just ordered a new keyboard – my “shift” key on the right isn’t working – so bear with the non-capitalized posts for a few days….

now, what you’ve been waiting for – the behind-the-scenes post of my tv segement!!! 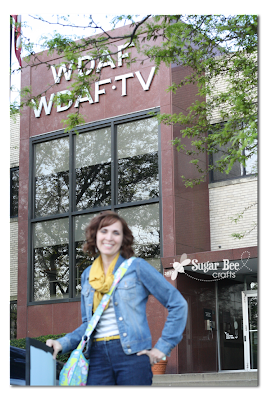 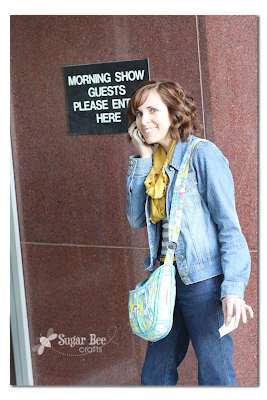 the big debate was of course, what to wear!!  it’s what i worried about the most – i didn’t want to be too dressy or too causal.  i settled on trouser jeans and that mustard infinity scarf, and found a mustard belt at target to pull it all together.

i drug kate along with me for a few reasons:
–i am awful at driving in traffic, and seeing as we were heading into the city in the morning, i knew we’d encounter some
–i am awful with knowing where to go – i printed directions off, but still – kate has some sort of internal map and knows where everything is
–i am not one to step outside of my comfort zone, so when i do of course i have to take someone with me
–i needed a photographer – to blog about the behind-the-scenes – and a helper to carry all the stuff 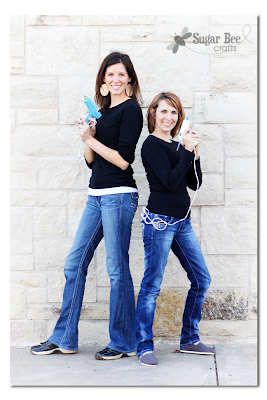 anyways, when get there, the anchorman pops out in the hall walking from place to place – and he was short – probably shorter than me.  Kate couldn’t stop giggling because her being so tall was such a contrast.  so she was giggly the entire time…

we get there and are lead to a green room.  no “hair and makeup” or anything, if you’re wondering.  there was a guy in the green room and at first i wondered if he was another of the tv anchors (goes to show that i don’t even know the show that well – my kids watch kid shows every morning, so i don’t see morning tv) but he was the guest on before me.  there was a tv in the green room, so right after he was lead out, there he was, on tv – kind of surreal… 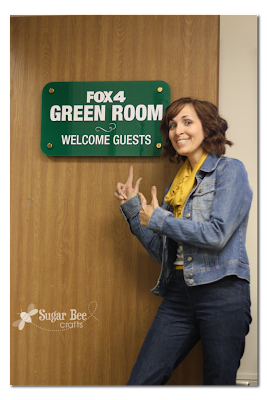 then they lead us out – right onto the set. there was no giant “on air” red sign flashing or anything, so i didn’t even know we were stepping onto the set – i’m sure i was talking pretty loudly.  this desk was at one end of the big room and the anchor desk was at the other end.  on the side wall was the green screen for the weather and traffic persons.  here i am getting mic-ed up 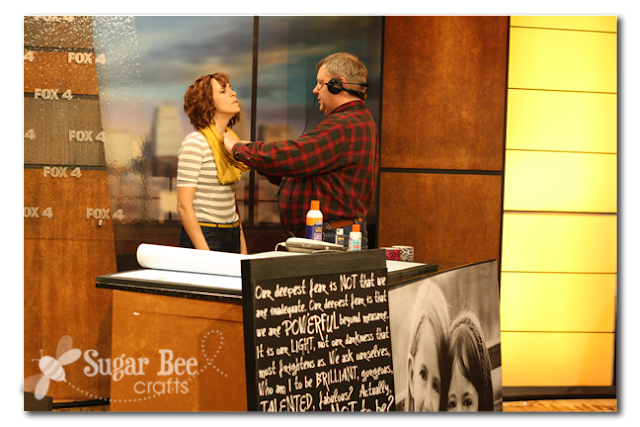 the whole thing was pretty funny – the anchors dance around and read emails and fb updates in commercial breaks and just yap to each other while the weather and traffic are being shown.  Kate on the sidelines- she showed up dressed like me, just in different colors: 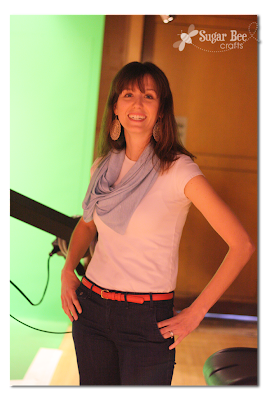 so anyways, there was no runthrough or heads up on what they’d say or anything – it just started.  there wasn’t even a 3-2-1-you are on, type of countdown – the anchorwoman just started talking and i thought, huh, we’re starting??  i knew i had about 3 minutes and i had practiced a talk-through a couple times at home with trevor as a stand-in tv anchor (which was pretty funny) so i’m glad i did that. 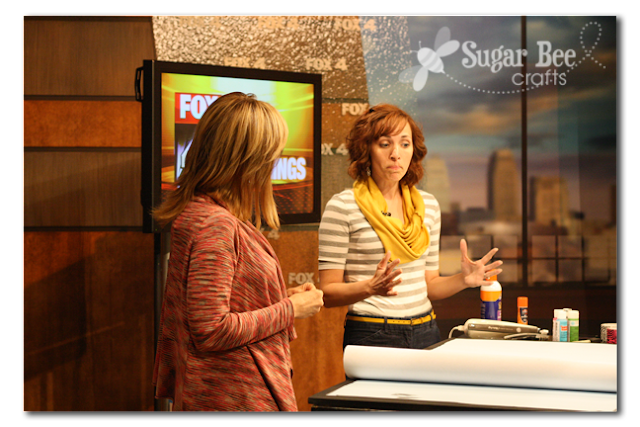 during the segment i almost knocked the spray glue over, twice, and completely forgot to mention that you can make big prints of quotes just like you do pictures.  my dad later asked why i had a big board with words, so oops, i meant to talk about that on air.  i also shook the life out of the spray glue – even after i had preshaken it before the segment, but i just wanted to be sure it worked.  kate’s view: 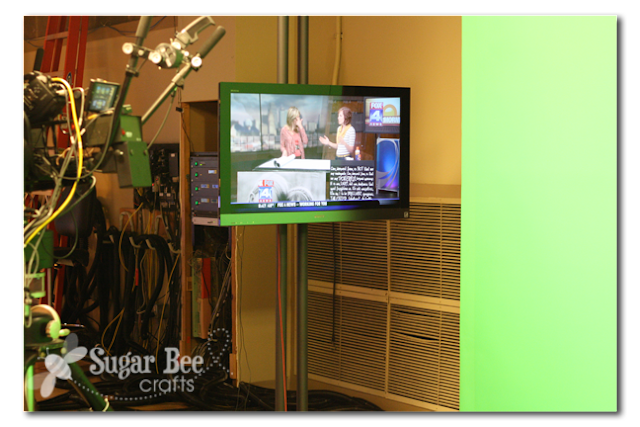 hey you, put down the spray glue!!! 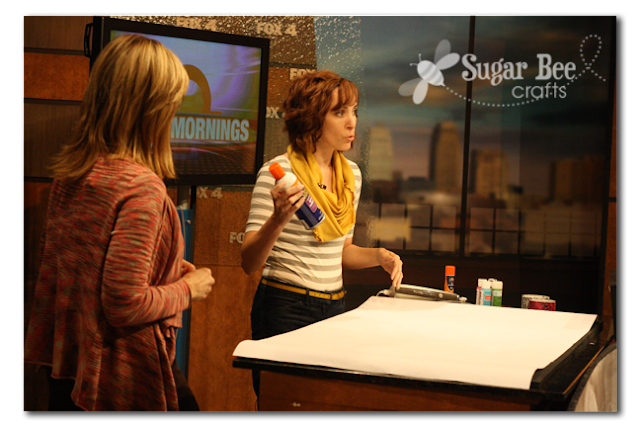 anyways, it was a fun experience and I am already booked to do another segment in may.  although i don’t think that’s because of my great job this time around or anything because that second one was already set up before they saw how the first one went.  and side note, i think they’ll let anyone on tv – they didn’t interview me or anything beforehand, just let me right on – who knew!