Another year, another exciting Pinewood Derby!! This year’s trophies are our favorite yet and as I shared them on social media, I was getting lots of questions, so I wanted to put together a quick post to explain them.  Love this Pinewood Derby Trophy Stand Idea! 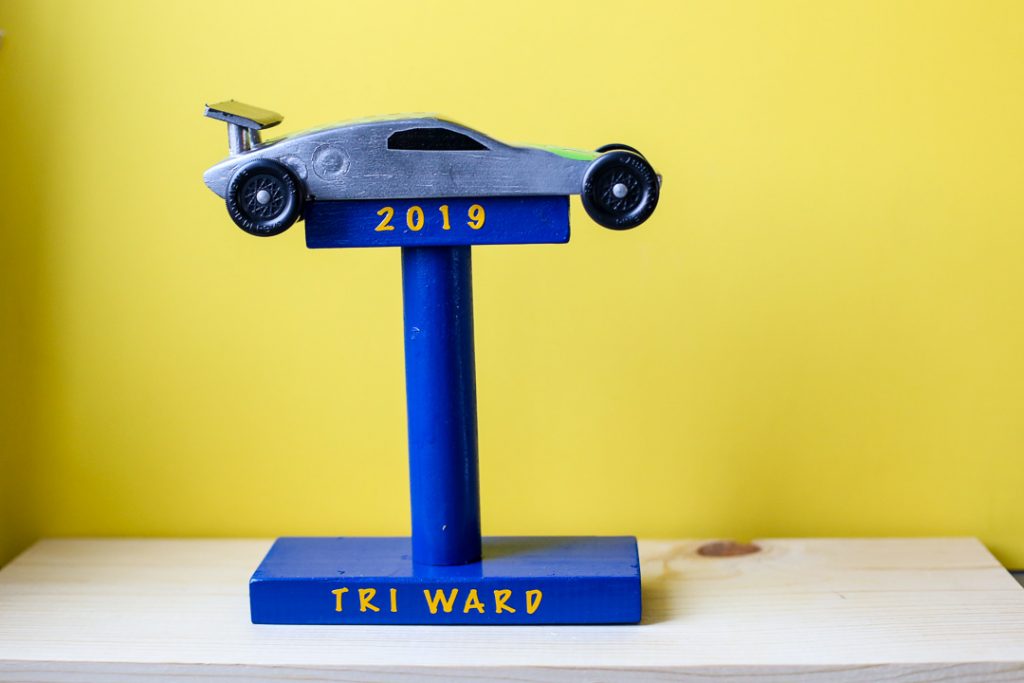 This trophy is especially awesome because it doubles as a stand – the pinewood derby car can sit right on top, to be displayed to the world! This post may contain affiliate links.

Here are some pinnable images so you can save this idea for later: 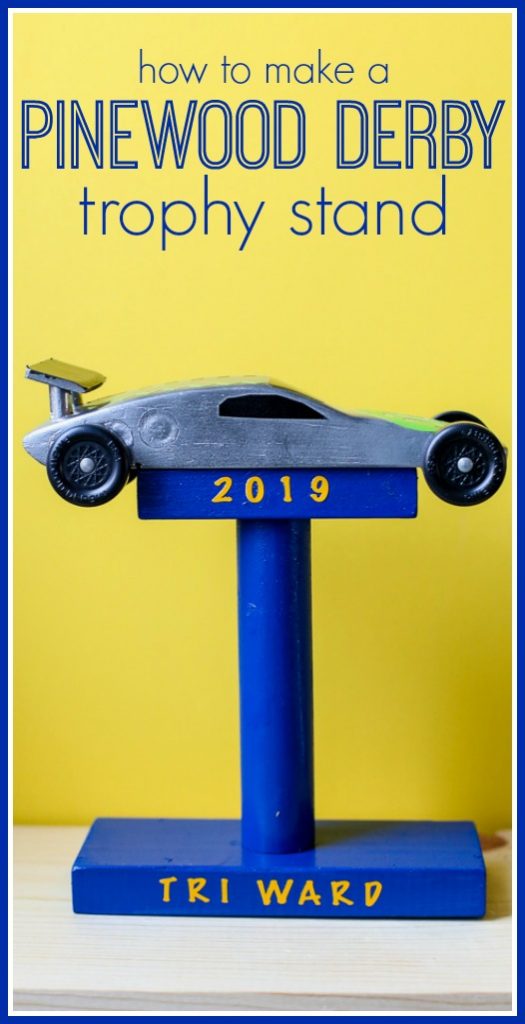 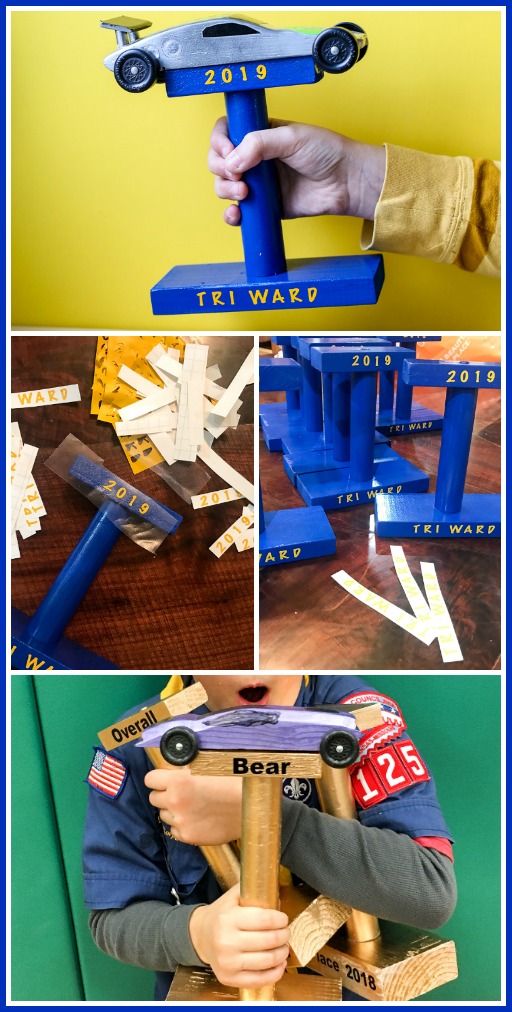 So last year we had to the idea to make the trophy as a stand to display the car.  We made gold trophies the tallest, silver medium, and bronze short.  They were painted those colors as well.  We had trophies for several racing categories, such as Bear Den, Wolf Den, Overall category, etc.  It was a lot of trophies and the boys were excited to see them all, thinking they would all be getting one. 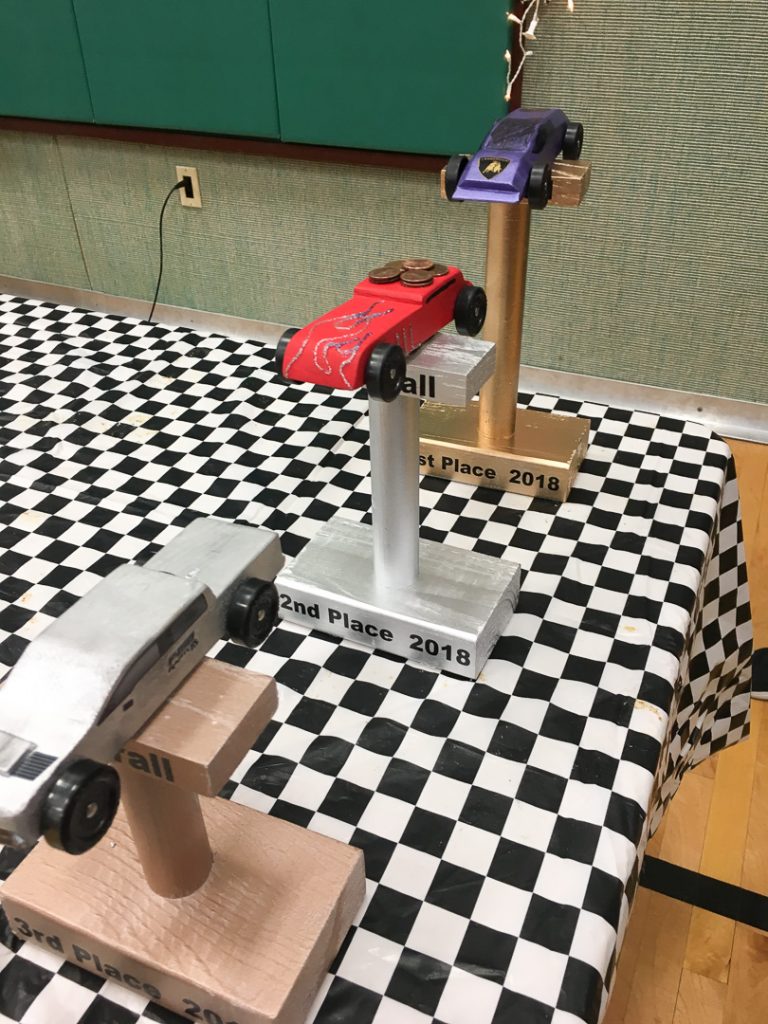 But the problem was that some boys would win more than one category.  For example, my kiddo won the Bear den race AND the overall race.  So then they got multiple stands while some boys didn’t get one, which was a bummer! 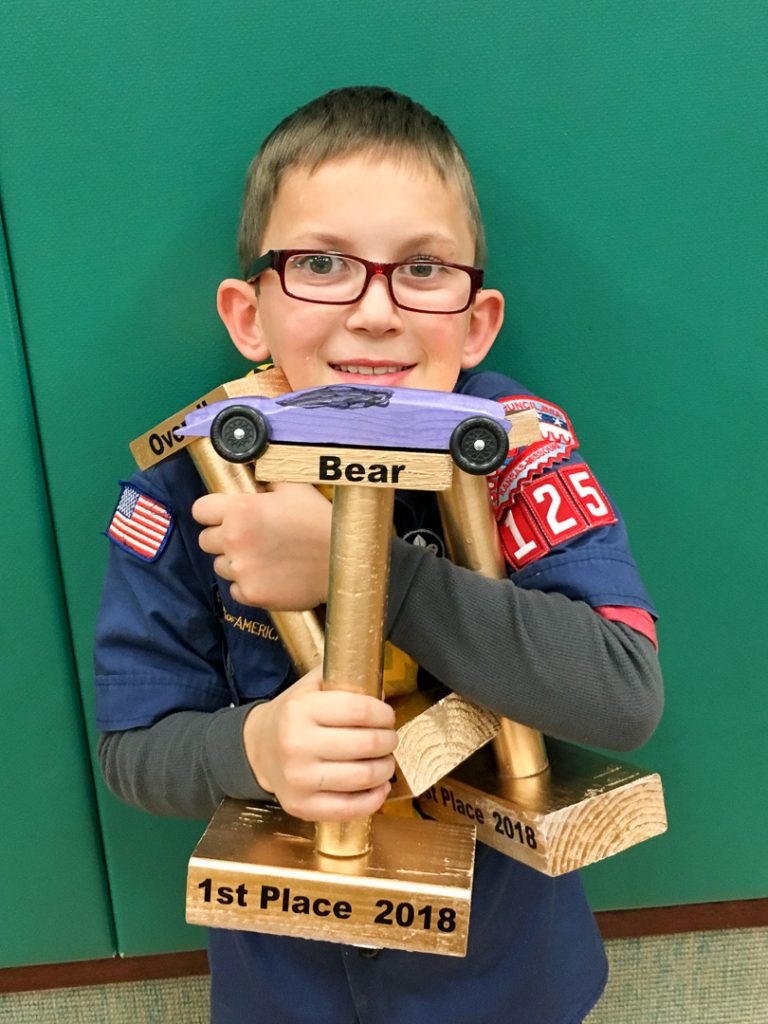 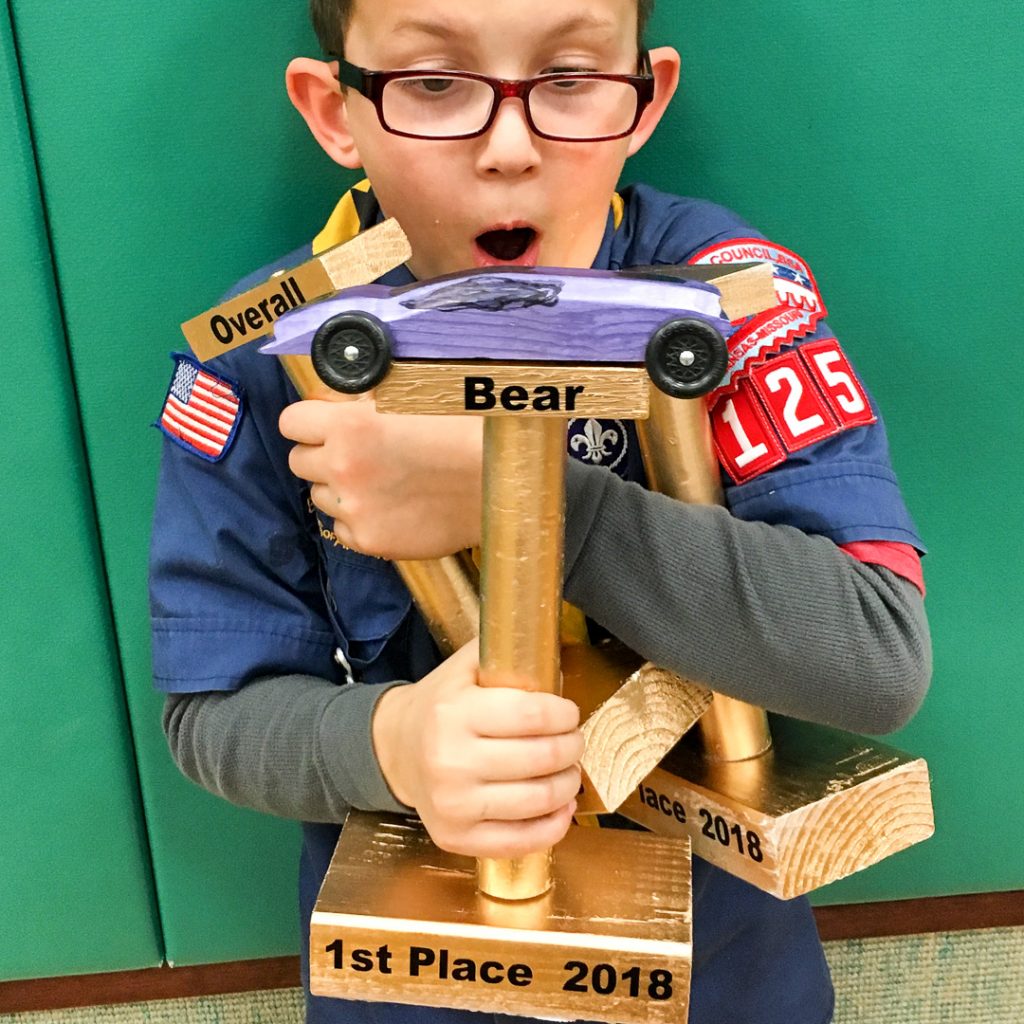 SO – this year we made a stand for every boy.  Then we also made simple “medals”, so the winners of the races can hang their medal off of their stand.  This is the best idea yet!!  This way all the boys get a stand but we’re still able to award medals to the winners. 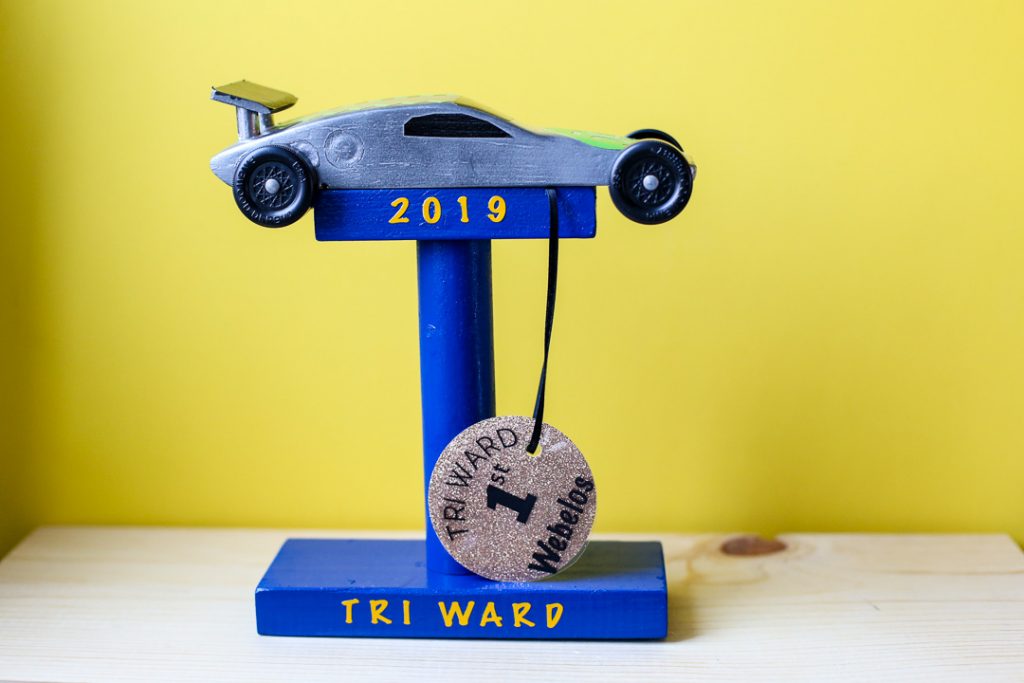 How to make a Pinewood Derby Trophy Stand

So to make the stand, simply screw everything together.  Screw through the bottom to attach it to the dowel rod: 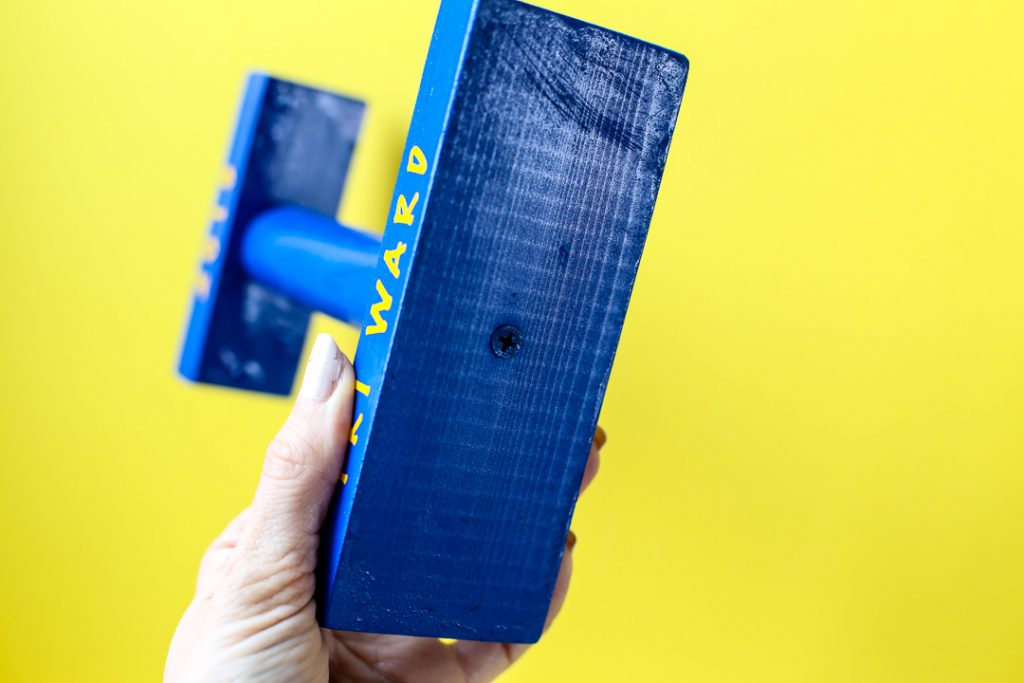 And then screw through the top to attach the top to the dowel rod.  It’s okay that you can see the screw on the top because the car will sit on top and hide it. 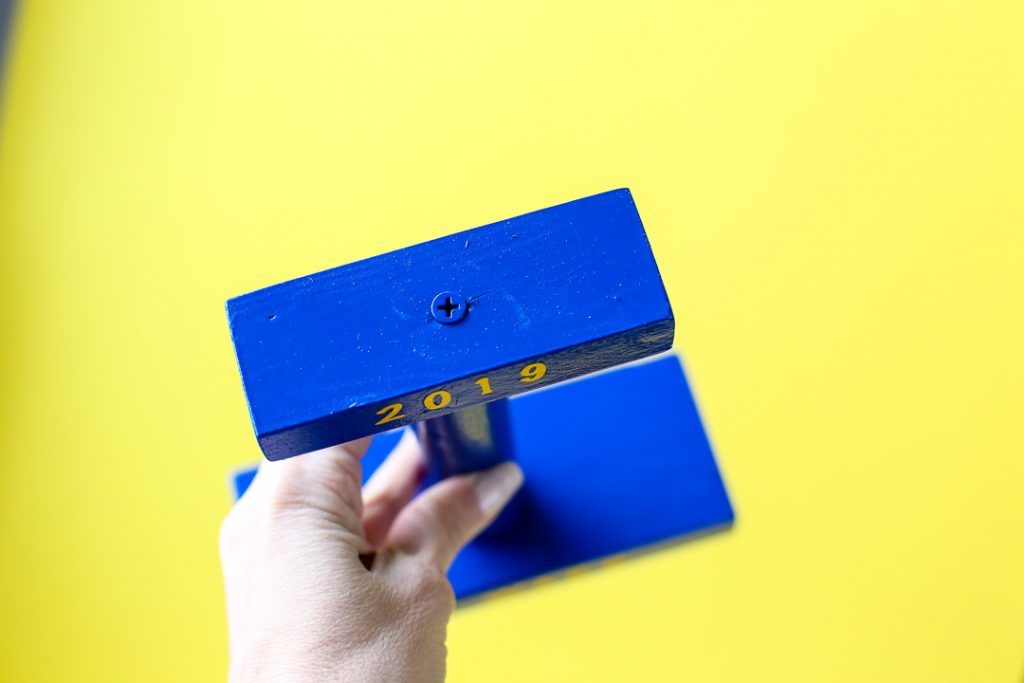 Next up you’ll paint the stands.  First you’ll want to sand down any rough edges: 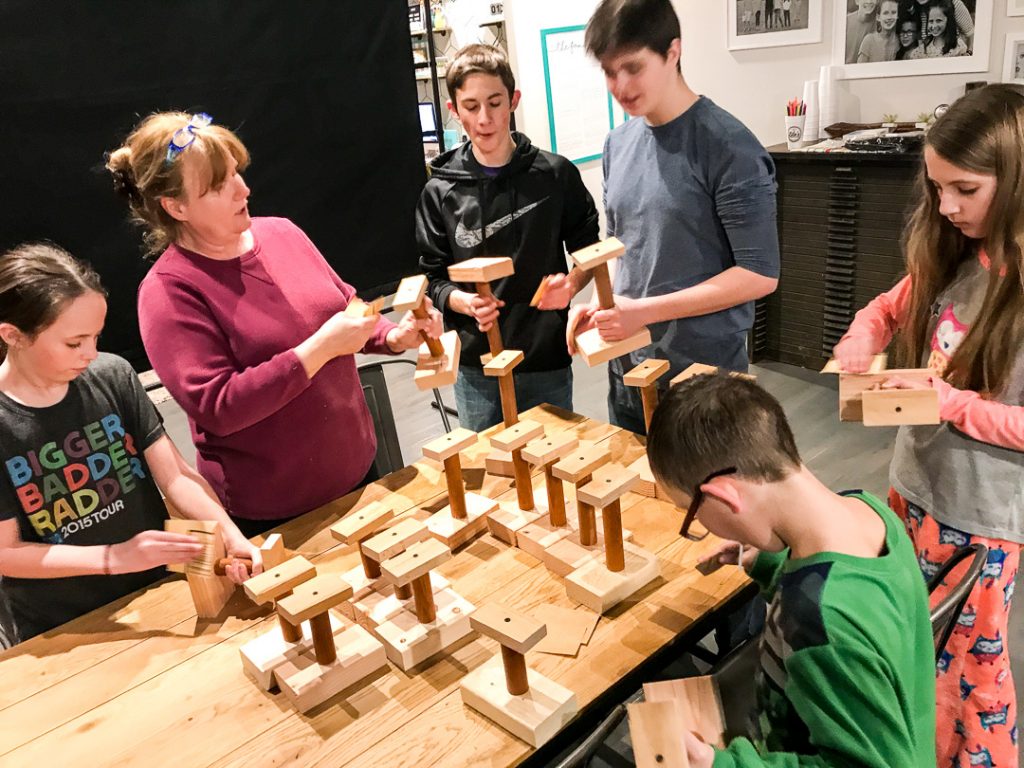 Then paint!  We used spraypaint because it seemed like the fastest option.  Again, this year we made all the trophies the same, all blue (played off the blue and gold of cub scouts), but this picture is from last year when we spray painted gold, silver, and bronze. 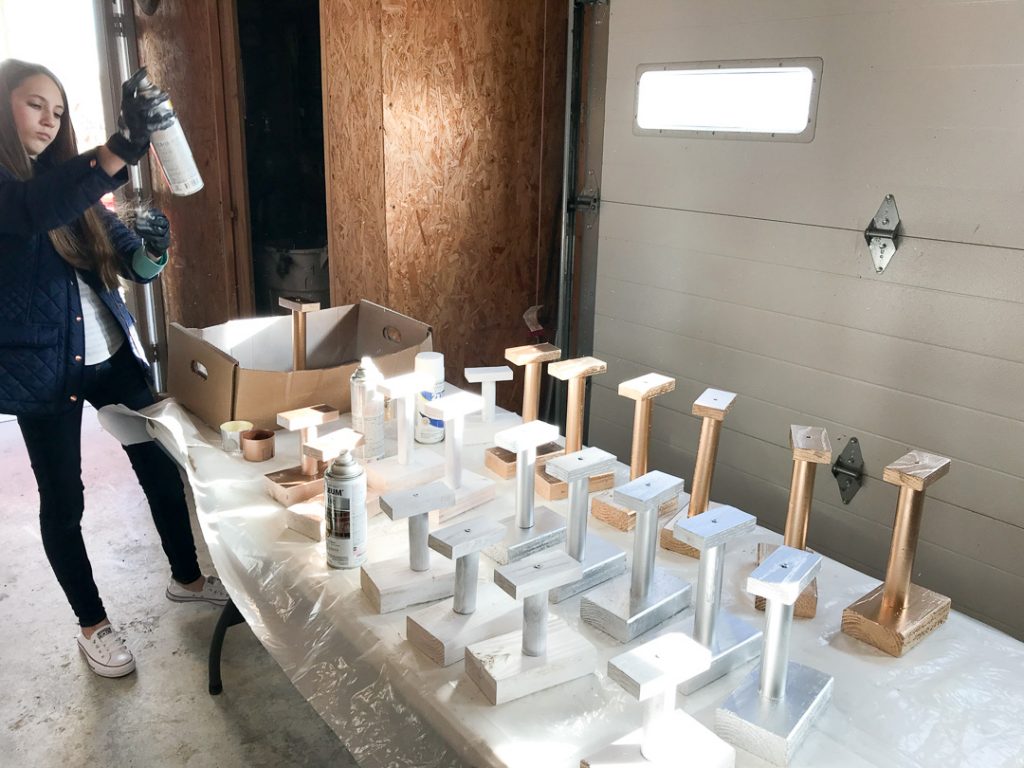 I used my Silhouette Machine to cut vinyl decals for the trophies, to label the cub scout pack and the year.  If you’ve never worked with vinyl before you can check out my post about How to Use Adhesive Vinyl.  Basically you cut it, then weed it all out: 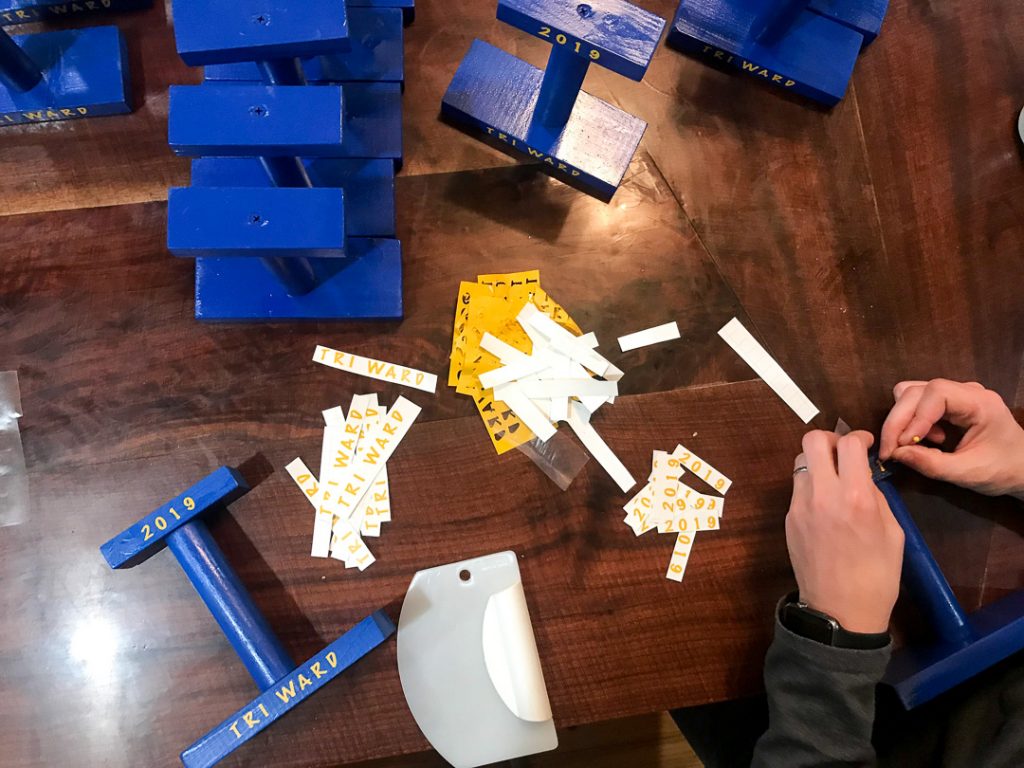 And then you use Transfer Tape to attach the vinyl to the trophy. 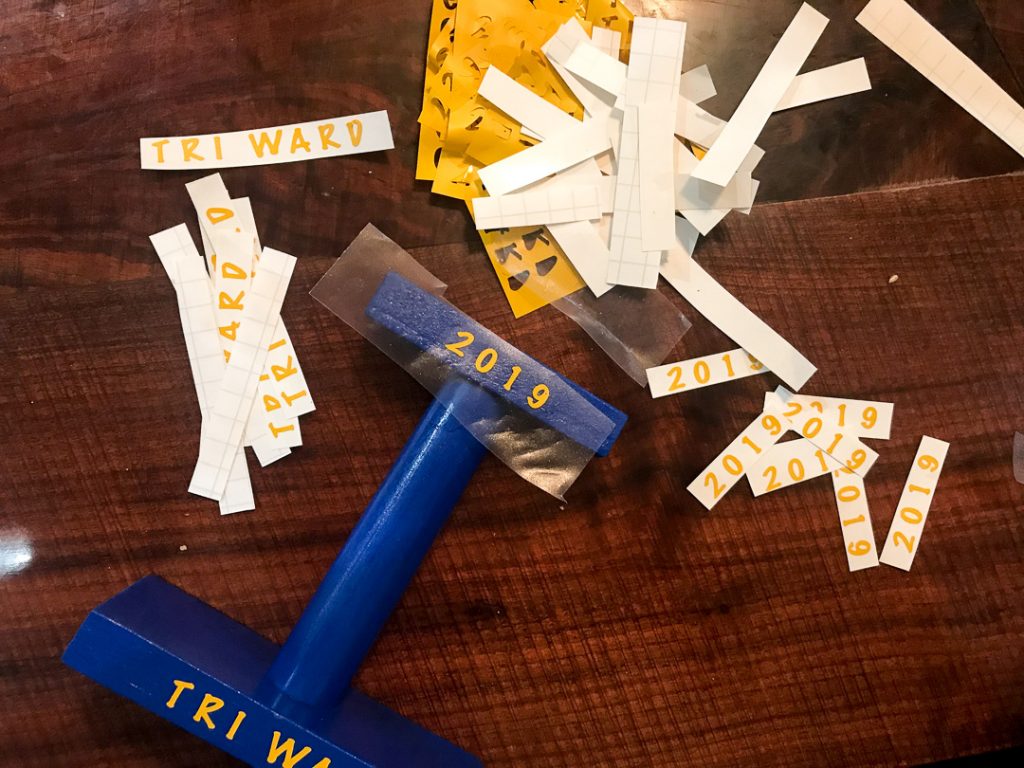 Then repeat a bazillion times 😉 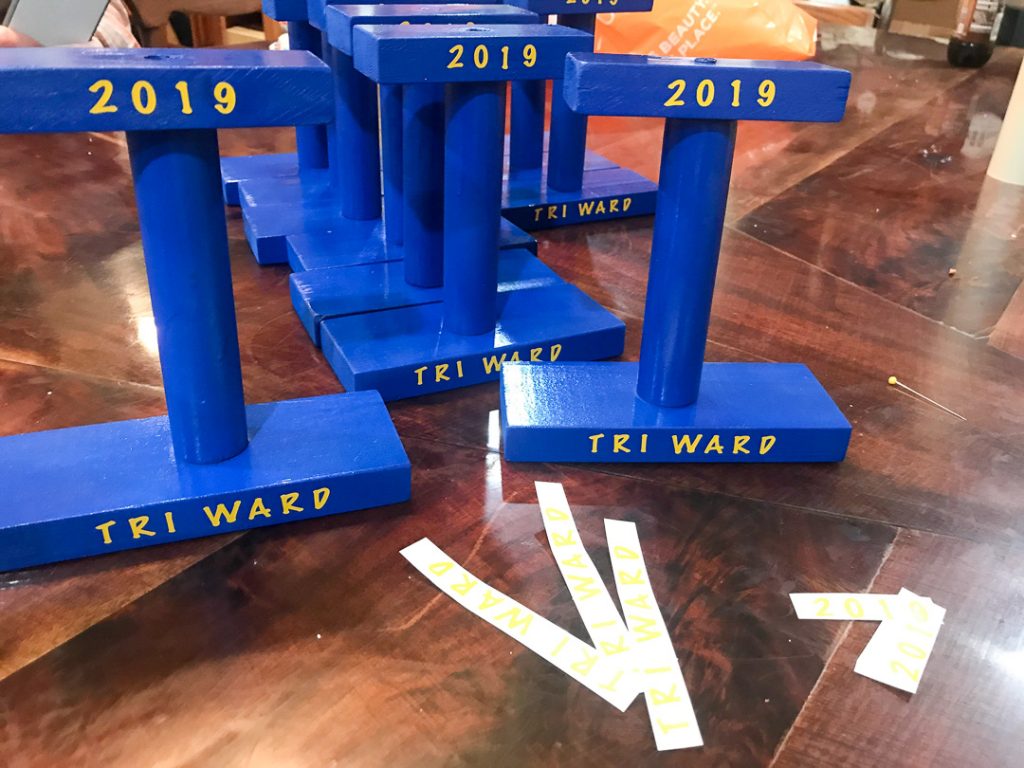 Because to the medals are for hanging on the stand, they didn’t need to be super durable.  We just used a large circle punch to punch out of glitter cardstock (in gold, silver, and bronze). 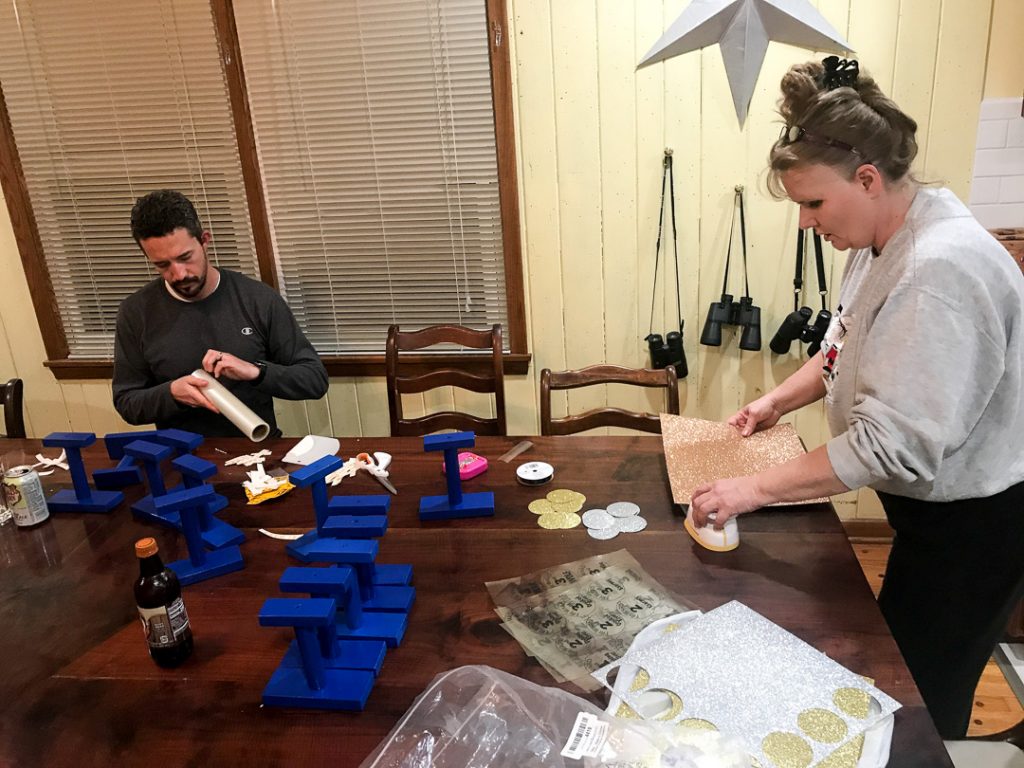 Then I printed text in a circle for 1st, 2nd, and 3rd onto clear transparencies and cut those out in a circle, then layered them on top. 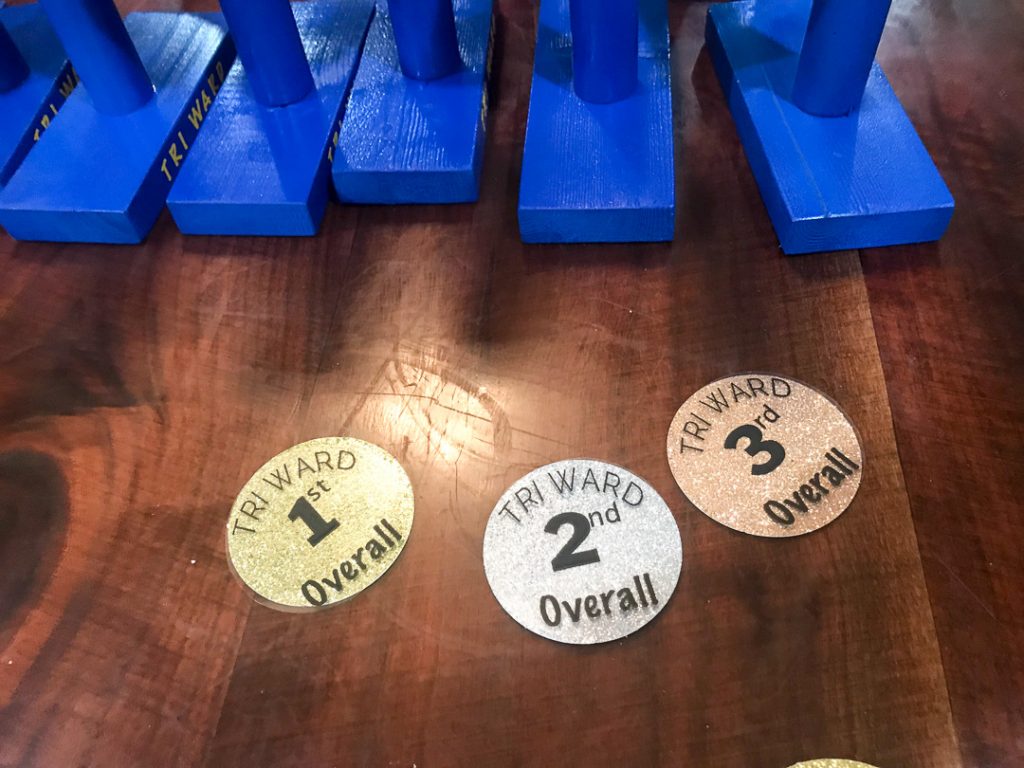 Then we just hole-punched through the two layers and tied on a ribbon so that the medals can loop around their trophy stand. 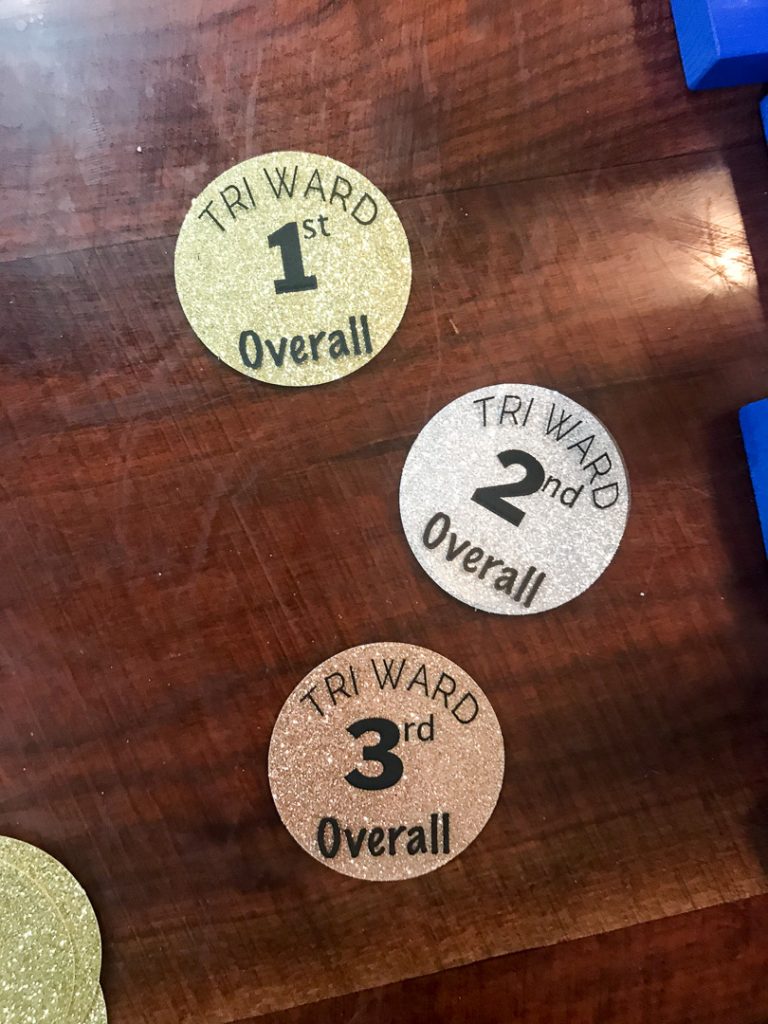 And voila!!  Done and done! 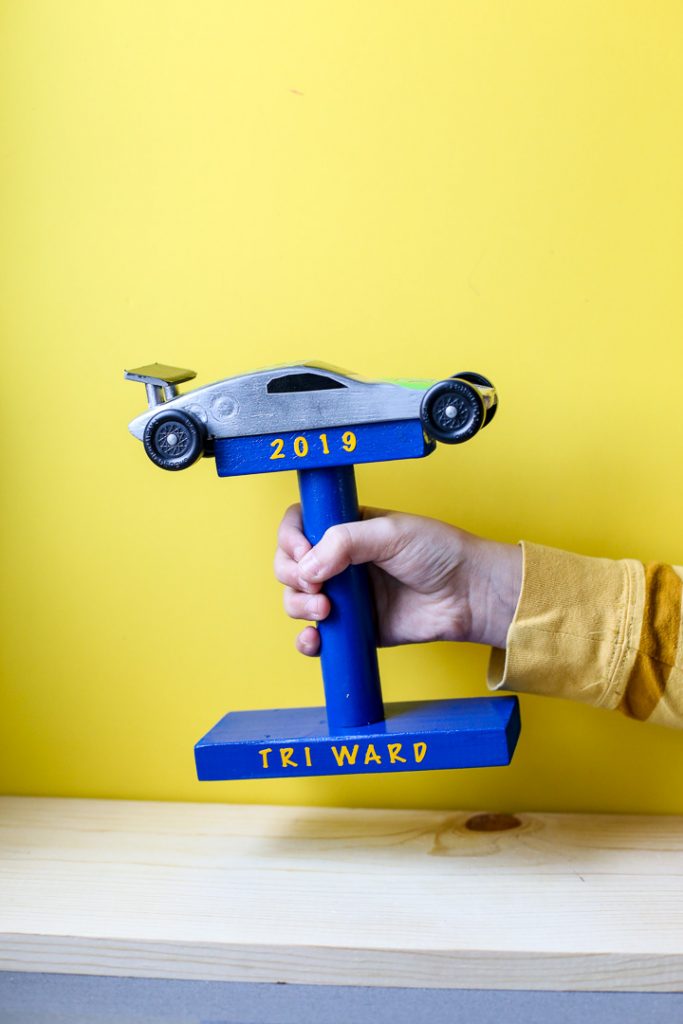 looking for more ideas for the Pinewood Derby?  You’ll also want to check out:

–How to make a FAST Pinewood Derby Car

–Pinewood Derby Certificates for Everyone

–Pinewood Derby Trophy Idea (another one)