Home » all misc » Magazine Rack Board – and Silhouette DEAL

2 shares
I love when a project evolves and works out even better than imagined!  That’s what happened with this Magazine Rack Board – I’ll walk you through a quick tutorial and give it’s life story 🙂  This leans against the wall and is perfect for those of you in apartments or anywhere where you don’t want to put holes in the wall. 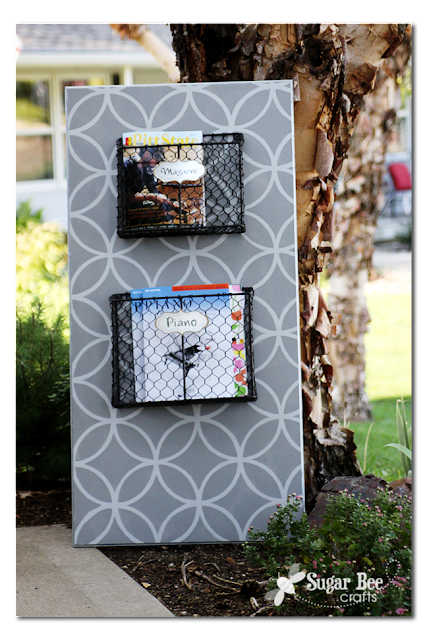 And, heads up, I made those labels with the new Silhouette Printable Foil.  It’s awesome.  And there’s an amazing deal for Silhouette – –  machine plus 3 printable packs for only $269.99.  Or just the 3 packs for $19.99.  use the code SUGARBEE when you check out to apply the deal. 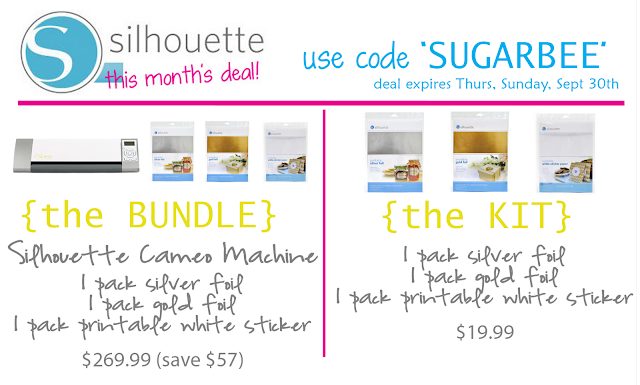 I’ll show you how I made the labels on down, so keep reading – first up, the board.
I got the baskets at World Market – LOVE them!!  As we redid our living room, I realized that the bookshelf in the corner wasn’t needed, and that it was making the room crowded.  It held a bunch of stuff I unpacked from when we moved in 4 years ago and didn’t know where to put it – and so I figured so that stuff was untouched it probably wasn’t that important.  Here’s the before – see, the bookcase isn’t working: 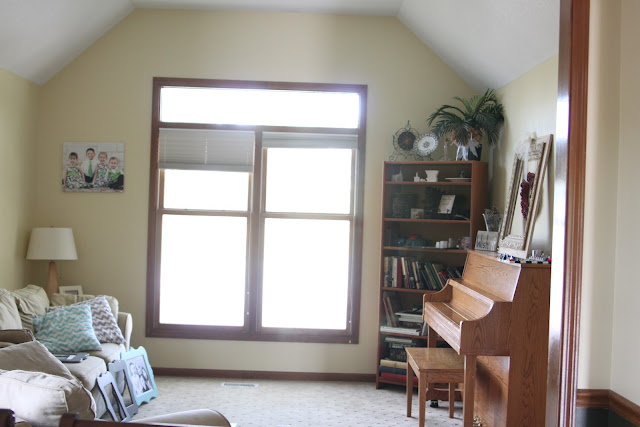 So, enter the baskets I found – I wanted to hang them on the wall for a few things – mainly piano books.  But Trevor was against hanging them directly to the wall – something about big holes that would probably rip out.
He suggest mounting them to a board.  And then I got excited – because I could stencil a board and tie it in to the decor from the attached Dining Room – perfect!  So excited that I wanted to start painting right away. So I did.  Apparently I should have let Trevor router the board first – he blogged about this project and Router Common Sense Here.
So with that little incident behind us, time to mount the baskets to board – his job. 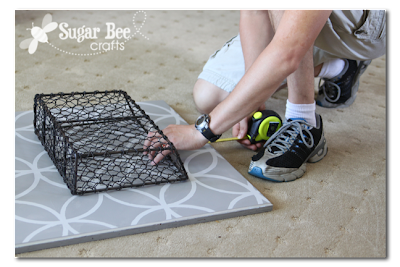 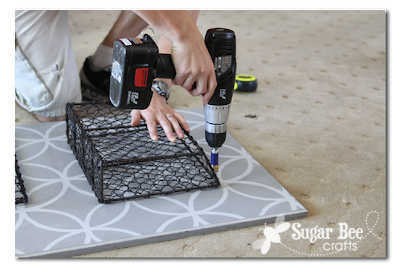 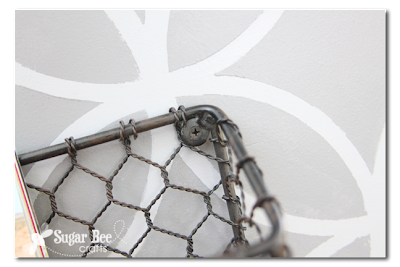 And then there’s felt pads on the back so the board can lean against the wall without scratching it, etc. 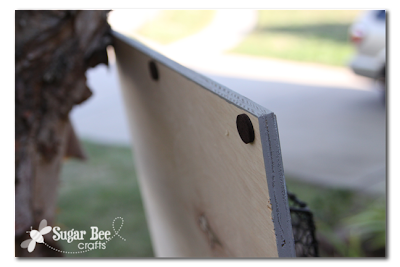 We didn’t mount the board to the wall because that would defeat the point of not putting holes in the wall.  Plus there is an outlet right there and with the board leaning on the wall it’s still accessible.  I think this Magazine Rack Board is a great way to personalize a space without actually hanging something on a wall – perfect for apartments, etc.  The corner now: 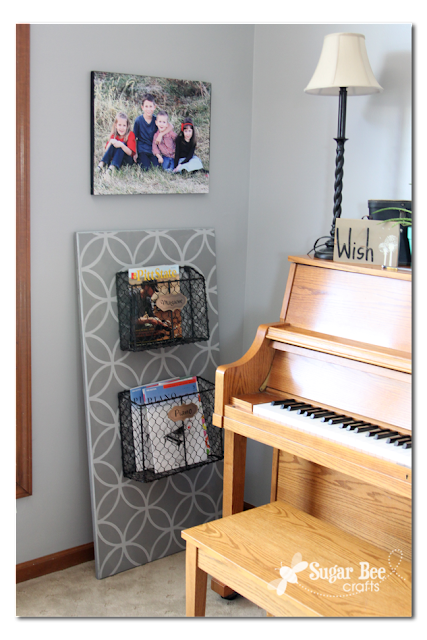 Now, on to the labels – can I tell you I just fell in love with my Silhouette Cameo all over again – – I had never used the “Print and Cut” feature until now.  It’s amazing!  Where has it been all my life?  First you print your design (be sure to turn on registration marks) – – – 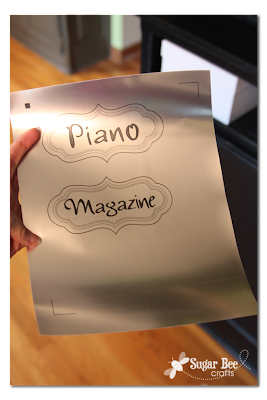 Then the Cameo uses a magic laser eye and reads those marks and knows just where to cut – wow!  Be sure to mark the words, inside lines, etc, as “no cut” so it’ll just cut the outside.  Then peel up the foil sticker: 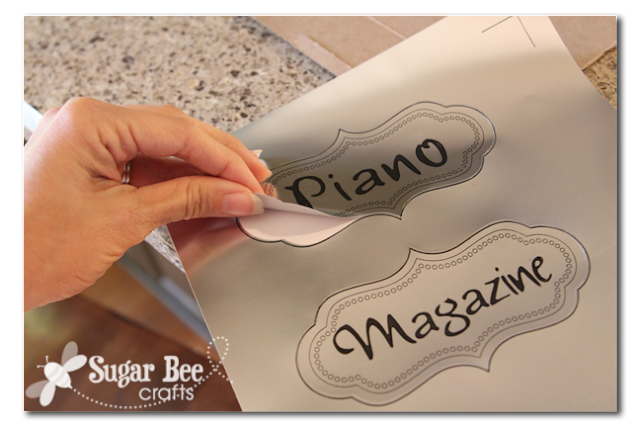 I wanted to mount the stickers to chipboard, but didn’t have any so I settled for a cereal box – almost the same thing.  Then just cut around it – – 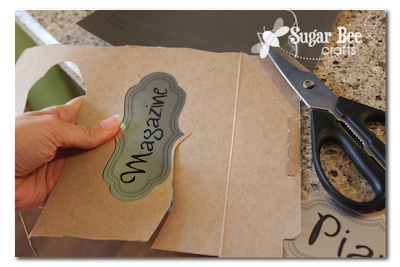 Finally I punched holes and used bakers twine to tie it to the baskets – – perfect! 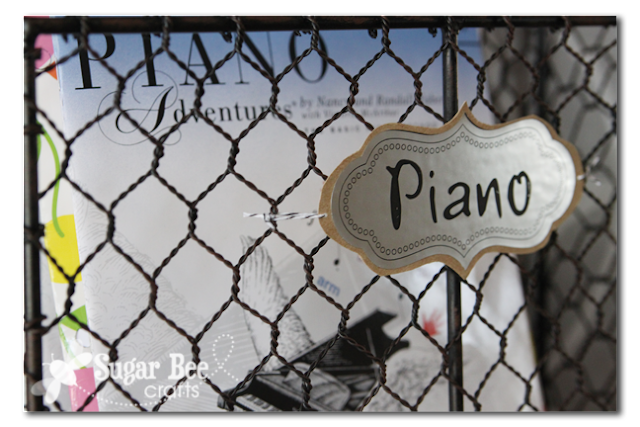 Remember, there’s the Silhouette deal (use the code SUGARBEE to apply the discount) that runs through Sunday.  If you’re still saving for a Cameo, you can still use the printable foil in your regular printer and just cut out your shapes with scissors.  The printable foil packs sold out last time they were released, so grab them now!