This is a Sponsored post written by me on behalf of Zenni Optical for SocialSpark. All opinions are 100% mine.

If you’ve been around me, you’ve heard me praise Zenni Optical  – – I try to tell everyone about it – – never pay real money for eyeglasses again!!  They are amazing, and so when the chance to promote them came along, of course I’m all over that.

Here me out — these glasses are cheap – like $6, YES, WITH lenses!!  I’ve considered doing the “free” deal with Costal Contacts when they run that promotion, but even that has $15 shipping – – with Zenni, I can get out of there with $12 TOTAL, shipping and all – – it’s unreal!

I have purchased 3 pairs from them – – a pink one, then when my toddler broke that pair (no big deal – it cost less than a meal out!) I bought a green pair.  Then Trevor bought himself a pair.  Several people I know have used them!!  I have a friend who’s child would always break their glasses so she just ordered her several pair and it was still cheaper than buying them from other places.  My neighbor used them to buy a pair of prescription sunglasses on the cheap.

I bought my first pair back in 2009 – – I thought it was such a good deal for cheap eyeglasses that I blogged about it on my family blog – here’s that post:

Eyesight for only 8 dollars

In the past few months a couple of unrelated blogs that I read mentioned Zenni Optical. I made a mental note, and even passed the info on to those I thought needed to be in the market for a backup pair of glasses (you know who you are..) but I had a pair. Well a few weeks ago Abby accidentally ripped off an earpiece off my glasses. I figure I only used them to and from bed and the bathroom every night and could wear them one-earred. Well, they got looser and looser and kept falling off my head in that short walk. And so I thought, I’m worth $8, I’m getting new glasses. And so I did. I went with something out of character, since it wasn’t a big investment. And I’m VERY impressed with the quality I got for $8. Highly Recommended!!

I tend to buy “crazy” pairs because I only wear them at night, so why not pick something fun!! They come with a case and everything.  The only downside to Zenni is that you can’t try on the glasses, so my green pair is a little big for me.  Oh well, it was only $6. Here’s that pair, picture from today: 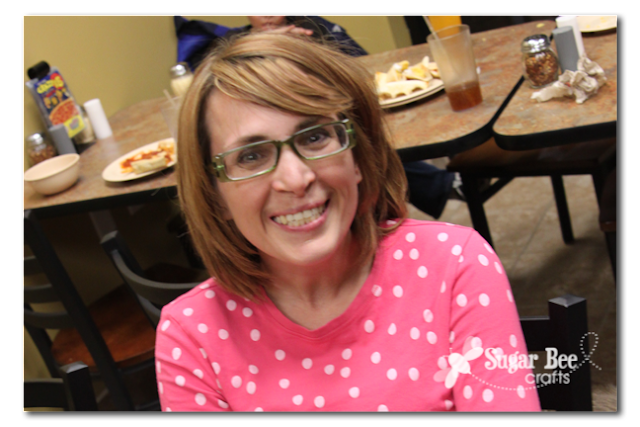 I know what you’re thinking “that picture is of her out in public – – I thought she never worn them out” – it’s true – – if you saw on FB, I am opting for Lasik (have I mentioned before that my eyes are -6.5 – – that’s so crazy nearsighted you can’t imagine!) so in order to do that I have to be out of contacts for 2 weeks – – sounds like a lifetime – today was day 1.

So anyways, back on track – – need glasses, use Zenni Optical!!  Then you’ll save so much $$ that you can splurge on more crafting supplies 🙂