I hosted our playgroup again last week – you know what that means – group crafting!! (Other playgroup crafts: snowman ornaments, fluff skirts, cupcakes, braided headbands, and I’m sure there’s more I’m forgetting..)
I just LOVE crafting in groups so I got things ready for us to make Countdown Blocks – – 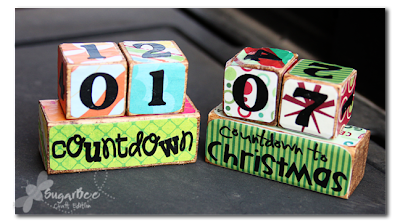 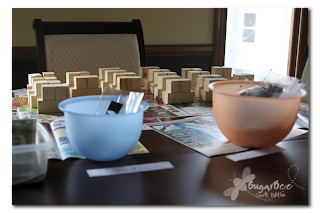 So first sand down all the rough edges (a bonus of group crafting – people other then me can demo for the pictures): 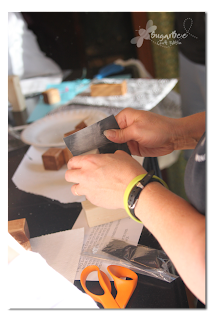 Then if you want (this is optional!) stain the edges.  I stained mine but after I saw someone’s who didn’t stain theirs I kinda wish I had gone that route – oh well… 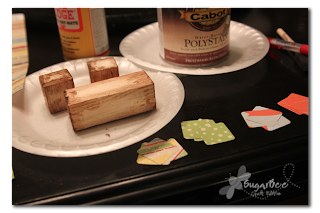 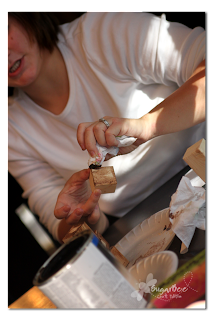 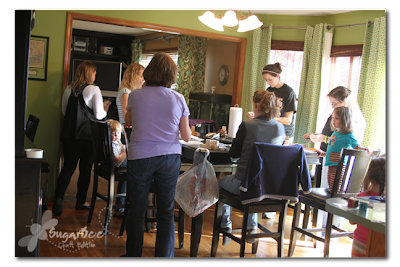 Apparently I stopped taking how-to pictures – next you cut squares of paper and stick them to the blocks using mod podge.  Then stick on the numbers.  Then mod podge over the whole thing.

NOTE ABOUT THE NUMBERS – there’s a certain way they have to go – anyone want to answer the challenge to figure it out??  I kind of like that sort of thing – my husband and I were hashing it out one evening, figuring out which numbers needed to be on which blocks – let me know in the comments if you figure it out and I’ll let you know if you’re right…..

We had 2 options – first, “generic” that just said “countdown” – these can be used to countdown to birthdays, vacations, when grandma comes to visit, last day of school, whatever: 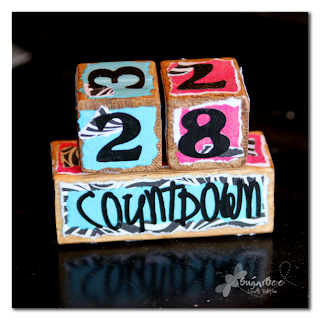 The other option was “countdown to Christmas” – I think that’s pretty self-explanatory: 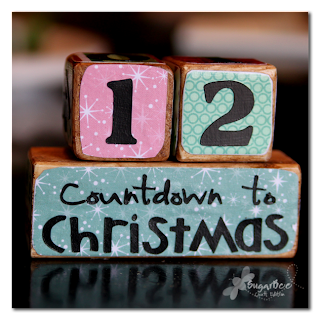 I, of course, had to make one of each set – here are mine:

Supplies to make your own:  To make my blocks I used a 2x2x8 board from Lowe’s – so go grab one of those and cut it with your chop saw into blocks (just remember that’s it’s not really 2×2 – more like 1.7×1.7).  To make my letters I used my Silhouette cutter, but you could buy some sticker sets or even just print them out in Word and cut around the letters with scissors. My paper was from Michael’s and a pack from good ole Walmart.  It’s cheap to make your own sets – go for it!

Now, after prepping all these mini-kits for our playgroup, I realized I should expand and prep some kits for you out in the fabulous craft blog world in case you don’t want to put together your own kit. This is not a fancy kit – it’s a “thrifty” kit, if that’s what you’re looking for..
.NOW SOLD OUT

Countdown Kits:  only $6 (including shipping!!)
Why So Cheap??
–the wood blocks are actual lumber, not cute craft blocks, so there are lots of imperfections in the wood – I’m okay with it because most of the wood is covered in paper, but think about if you’d be okay with it.
–don’t be fooled – the wood blocks are smaller than you think – 1 1/2+ inches square.  When I first saw these countdown blocks on blogs I thought they were big – but most are about 2 inches.
–the numbers/letters are out of cardstock, not vinyl – so you have to mod podge them on instead of sticking them on like a sticker
—kits include wood, numbers/letters, a square of sandpaper, and instruction sheet – that’s it!!  YOU PROVIDE YOUR OWN PAPER AND MOD PODGE AND STAIN – I’m okay with this because lots of people have scraps of paper laying around, and if not, it’s kind of fun to go pick out a few sheets of something you really like.


I won’t be offering these forever (remember when I ran out of badge magnets and people missed out??) so if you’d like one, go for it.  If you’d like a bunch (5 or more kits), email me first and maybe I can save you a little on shipping.


I think this would be fun to do with family/friends on Thanksgiving when the men are out shooting guns (oh wait, is that just our family?).

Anyways, the buy-it-now button is below or on my sidebar – –