It’s the ultimate question for all you crafters out there – which is better, Silhouette Cameo versus Cricut Explore??  I have both, and I want to share my candid thoughts on the machines to help you decide on which you need.  As a crafter, I do think a cutting machine is a must-have – – I would put it up there with my sewing machine and hot glue gun.  But which is best?? (this is not a sponsored post, but may contain affiliate links) 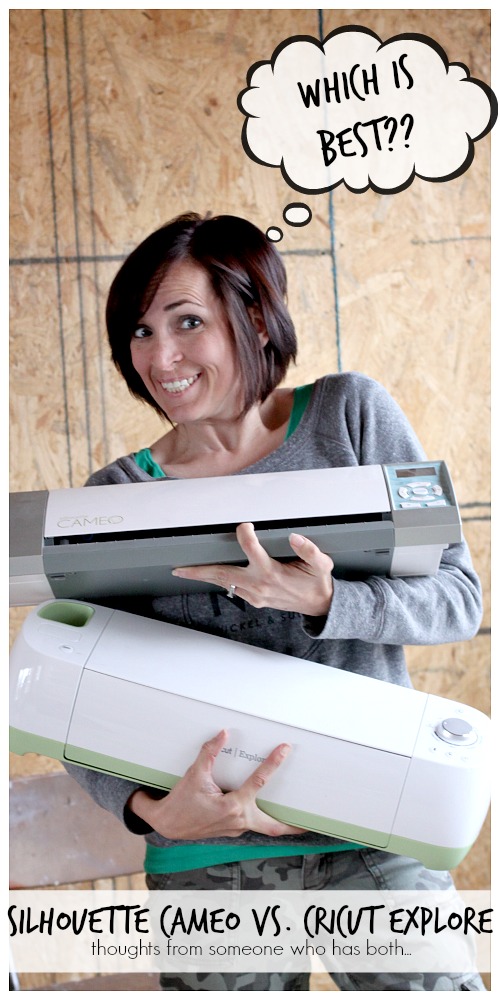 So, you’ve decided you want a cutting machine – now what?  How will you know which is the best for you?  Just to put it out there – the ultimate choice would be to have both!  I love having both and they both have different strengths, so if both is in any way an option for you, that’s probably what I’d recommend first. Both, cause they’re awesome 🙂  But I’m sure both just isn’t an option for lots of you, so here are some thoughts I have – –

IMAGES in STORE – both have super cute in-store images that you can purchase at a minimal price.  If you’ve owned a Cricut in the past, you can use your cartridges with the Cricut Explore, so that might influence your decision.

MACHINE – both are great machines and work in a similar way.  A blade runs along a track and then wheels move your paper back and forth to let the blade cut the pattern you designated.  The Cricut Explore is heavier (I only know after I took that picture above!) and a little bigger, but in general they’re about the same size.  The Cricut Explore has a dial for depth right on it, which is super handy.  The new Silhouette Cameo has a fancy display screen, but I don’t have that one.  SETTINGS on the machine – both machines has options for you to manipulate settings, such as blade depth (you set how deep the blade is depending on the thickness of what you’re cutting – vinyl is shallow, but cardstock is deep).  I think the Explore is easier to adjust those settings with.  It’s doable on both machines, and not that hard on either.  The Cricut Explore does have a separate “deep cut” blade you can purchase, and that option is not available with the Silhouette Cameo.  If I were basing my recommendation on machine alone, I would lean towards the Cricut Explore.

SOFTWARE – for me, this is the big deciding factor.  Both machines have software on your computer that tells the machine what to cut, etc.  I really struggle getting the Cricut Explore software to do what I want it to – it has a simplified software.  It is noteworthy that I have had my Silhouette Cameo longer, so I may be more acclimated to that software.  The Explore’s software is web-based, meaning it’s not installed on your computer.  Which is a downside for those with slow internet.  Cameo has software that installs like any other program you use on your computer.  Both allow custom designs, which is a plus.  But with the Silhouette Cameo you can design right there in the software – manipulate designs by erasing sections, drawing lines, etc.  With the Cricut Explore to really design your own image you’d need to do it in a separate program like Photoshop and then pull it in.  With Explore you can layer images, etc, to create a design, but you can’t manipulate those specific images much.  For me, the software with the Silhouette Cameo is much better.

WHICH IS BEST??  This is totally dependent on you – I really do think both are great options.   For me, I prefer the Silhouette Cameo.  I can design my own things within it’s software.  If you are at least semi-comfortable with computer stuff, I would recommend the Silhouette Cameo.  But if you won’t be manipulating images – say you know you’ll just pick a star and cut it, that’s it – then I would recommend the Cricut Explore.  It is a simplified software and if you won’t be trying to design images, etc, it would be a great machine for you.

FAVORITE THINGS to MAKE – I love making personalized things with my cutting machine.  For me, it’s the whole reason to have it – to craft something special and unique.  My most favorite medium is vinyl – which is like cutting your own stickers.  And I really love heat transfer vinyl, which is cutting your own sticker that irons onto a shirt.  You can see some of my projects here (but I know it’s not recently updated – that’s on my to-do!) https://www.sugarbeecrafts.com/silhouettecameo-projects   – my favorite place to buy vinyl is Expressions Vinyl – it’s a great every-day deal.  Sometimes you can find a better deal at daily deal sites, so I’m always watching those too.